There are 3 entries for this date: Howard Zinn , Arian Foster and Stephen Fry 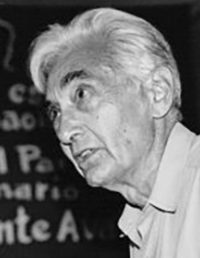 On this date in 1922, historian, author and peace activist Howard Zinn was born in New York City to Jewish immigrants. As a 17-year-old, Zinn attended a political rally in Times Square at the urging of neighborhood Communists and was knocked unconscious by police. He joined the Army Air Corps in 1943, received an Air Medal and, upon returning home, placed his medal and military papers in a folder on which he wrote "Never again."

Zinn attended New York University and received a doctorate in history from Columbia University. He became chair of the history and social sciences department of Spelman College, the historically black college for women in segregated Atlanta, in 1956. He participated in the civil rights movement, served on the executive committee for SNCC (the Student Nonviolent Coordinating Committee) and inspired many of his students, including Alice Walker.

Fired for "insubordination" from Spelman in 1963 (for his criticism of the school's failure to participate in the civil rights movement), Zinn took a position teaching history at Boston University, which he held until retirement in 1988.

An aggressive and early opponent of the Vietnam War (and war in general) and champion of liberal causes, Zinn's 1967 Vietnam: The Logic of Withdrawal, was the first book calling for immediate withdrawal from the war with no exceptions. His A People's History of the United States, published in 1980 with a small printing and little promotion, was a best-seller, hitting 1 million in sales by 2003. In his 1994 autobiography You Can't Be Neutral on a Moving Train, Zinn wrote, "I wanted students to leave my classes not just better informed, but more prepared to relinquish the safety of silence, more prepared to speak up, to act against injustice wherever they saw it."

While his publications were numerous, some of the highlights include the plays "Emma" (1976), about radical feminist and atheist Emma Goldman, "Daughter of Venus" (1985) and "Marx in Soho: A Play on History" (1999), and books such as Artists in Times of War (2003), History Matters: Conversations on History and Politics (2006), and Failure to Quit: Reflections of an Optimistic Historian (1993).

Zinn received the 1958 Albert J. Beveridge Prize from the American Historical Association for his book, LaGuardia in Congress; the 1998 Eugene V. Debs Award from the Debs Foundation; the Upton Sinclair Award in 1999; and the 1998 Lannan Literary Award. Zinn's wife and lifetime collaborator, Roslyn, died in 2008. Zinn died of a heart attack while swimming at the age of 87 in 2010.

"If I was promised that we could sit with Marx in some great Deli Haus in the hereafter, I might believe in it! Sure, I find inspiration in Jewish stories of hope, also in the Christian pacifism of the Berrigans, also in Taoism and Buddhism. I identify as a Jew, but not on religious grounds. Yes, I believe, as Pascal said, 'The heart has its reasons which reason cannot know.' There are limits to reason. There is mystery, there is passion, there is something spiritual in the arts — but it is not connected to Judaism or any other religion." 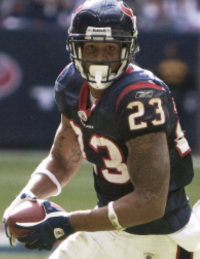 On this date in 1986, freethinking athlete Arian Isa Foster was born in Albuquerque, N.M., to Carl and Bernadette (Sizemore) Foster. His father signed with the NFL's Denver Broncos but never played in the pros. His parents divorced when he was a high school sophomore and Foster moved with his father to San Diego. After graduation he enrolled at the University of Tennessee, where he was a three-year football starter at running back.

He told an ESPN writer in 2015 that "he was the only member of the team who did not identify as either Christian or Catholic, which made him a source of speculation and misconception" and that "his contrarian side sought out religious arguments with fundamentalist teammates."

He signed after graduating with the NFL's Houston Texans and played there from 2009-15, setting franchise records for rushing yards and touchdowns. Injuries, including a bulging spinal disc and a 2015 ruptured Achilles tendon, ended his career in 2016. He was known for his signature "Namaste bow" in the end zone after scoring a touchdown. He told the online site Well and Good in 2015 that the bow "best describes not myself, but the message I want to convey to my fans — I recognize the light in you. I want to be appreciative of the game and everyone watching.”

His father had convinced him to start practicing yoga, and for a time he chose a vegan diet, saying he could eat up to seven pounds of kale in one sitting. He invested in Health Warrior, the maker of chia seed superfood snacks, instead of endorsing products like pizza and Pepsi, as is the pro football norm. He joined a national campaign by the nonprofit group Openly Secular to increase awareness and acceptance of nonbelievers, especially in sports.

Foster's first acting role was a cameo in CBS’ “Hawaii Five-0.” His feature film debut was in "Draft Day," starring Kevin Costner and Jennifer Garner in 2014. His podcast "Now What? with Arian Foster" debuted in 2017. He released his debut rap album "Flamingo & Koval" under the stage name Bobby Feeno in April 2018. His Arian Foster Family Foundation is committed to fighting childhood obesity, improving financial literacy and personal development of inner-city youth.

"There's no dogma in science itself. Scientists? Yeah, any human can have an ego, but if you take the human beings out of it, there's no ego in science itself. It's built on 'prove me wrong.' But religion can be like, 'We're right, and if you're not in the boat, you're going to hell.' " 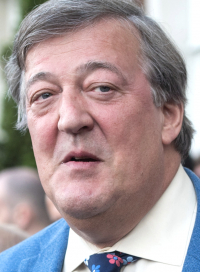 On this date in 1957, Stephen Fry was born in London, England. He grew up in Norfolk. At age 17, after leaving school, he was convicted of credit card fraud. After serving time in prison, Fry studied at City College Norfolk with the intention of sitting entrance exams for Cambridge, where he received a scholarship. At Cambridge, he performed in the Cambridge Footlights Review with Emma Thompson and Hugh Laurie.

Fry and Laurie continued their comedic collaboration outside of school, including the sketch comedy show “A Bit of Fry and Laurie,” for the BBC, which had six seasons between 1986 and 1995. From 1990 to 1993, Fry and Laurie also starred in “Jeeves and Wooster” (Fry played Jeeves). Fry has had a wide-ranging career in acting, comedy and writing.

He is very active in social media, preferring to speak directly to his fans whenever he can, such as through Twitter and on his personal website. In 2003 Fry began hosting the BBC television panel comedy game show “QI.” Fry has been openly gay for his entire professional life and advocates for gay rights. He grew up in an atheist home but had a brief flirtation with Christianity as a teen after reading C.S. Lewis's Screwtape Letters and works by G.K. Chesterton.

But as an adult he returned to atheism and is very open about his nonbelief, describing the Christian God as "utterly evil, capricious and monstrous" in an interview with The Guardian in February 2015.

In 2011 he received a Lifetime Achievement Award in Cultural Humanism from the Humanist Chaplaincy at Harvard and the American Humanist Association. In February 2015, Fry stated on the Irish television show “The Meaning of Life," "Why should I respect a capricious, mean-minded, stupid God who creates a world which is so full of injustice and pain?”

Asked how he would react if he was locked outside the pearly gates, he responded, "I would say, 'Bone cancer in children? What's that about?’ Because the God who created this universe, if it was created by God, is quite clearly a maniac, utter maniac. Totally selfish. We have to spend our life on our knees thanking him? What kind of God would do that?”

After a viewer made a formal complaint in 2017, police in the Republic of Ireland started prosecution charges for blasphemy against him, invoking Ireland’s controversial new Defamation Act, which made blasphemy punishable by a fine of 25,000 euros. After the announcement set up an international outcry, the prosecution was dropped, ironically because, it was stated, that “there were no injured parties.” Nearly 65% of voters voted in 2018 to repeal the blasphemy law.

"I love how when people watch I don’t know, David Attenborough or Discovery Planet type thing you know where you see the absolute phenomenal majesty and complexity and bewildering beauty of nature and you stare at it and then … somebody next to you goes, 'And how can you say there is no God? Look at that.' And then five minutes later you’re looking at the lifecycle of a parasitic worm whose job is to bury itself in the eyeball of a little lamb and eat the eyeball from inside while the lamb dies in horrible agony and then you turn to them and say, 'Yeah, where is your God now?' "