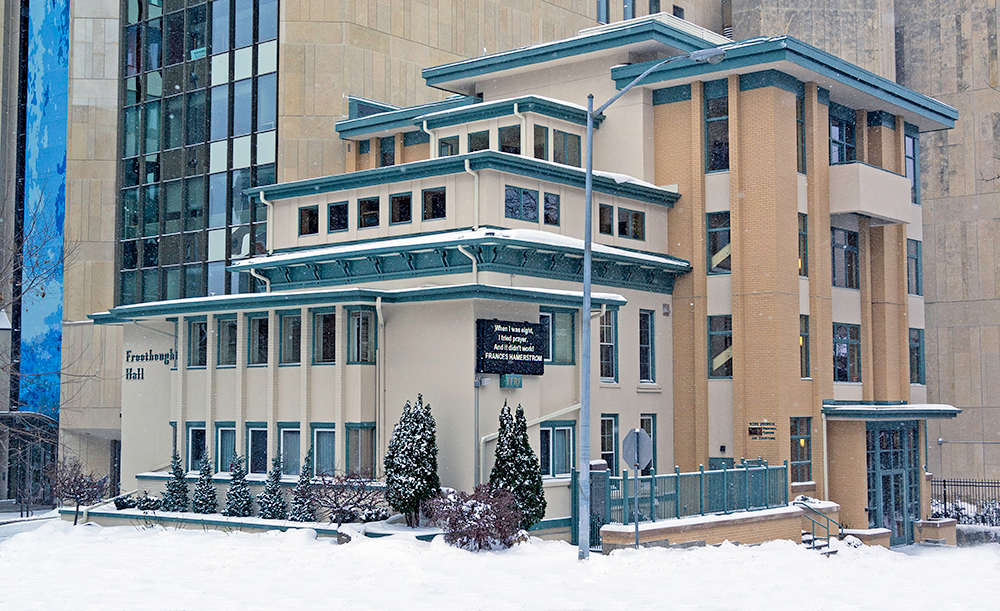 The Freedom From Religion Foundation is a national membership organization with State Representatives selected by members and a governing Executive Board of Directors selected by the State Representatives. The Foundation is a non-profit, tax-exempt organization. Non-profit status under the Internal Revenue Code, Section 501(c)3, was recognized originally in 1978, with a final tax-exempt determination in 1980. Contributions are deductible under Section 170 of the Internal Revenue Code for federal income tax purposes. Bequests, legacies, devises, transfers and gifts to or for the use of the Freedom From Religion Foundation are deductible for federal estate and gift tax purposes under the provisions of Sections 2055, 2106 and 2522 of the Code. The Foundation, a membership group open to the public, has been classified as an organization which is not a private foundation.

The Foundation is funded by membership dues and specific gifts. It holds an annual convention and membership meeting, publishes a monthly newspaper and broadcasts a weekly radio show. Detailed annual financial statements are provided to all members, and the tax-exempt Foundation files an annual 990 Form accounting for its expenditures. The Foundation engages in publishing books and pamphlets, in producing films and music, in awarding scholarships and in conducting court challenges of violations of the separation between church and state. 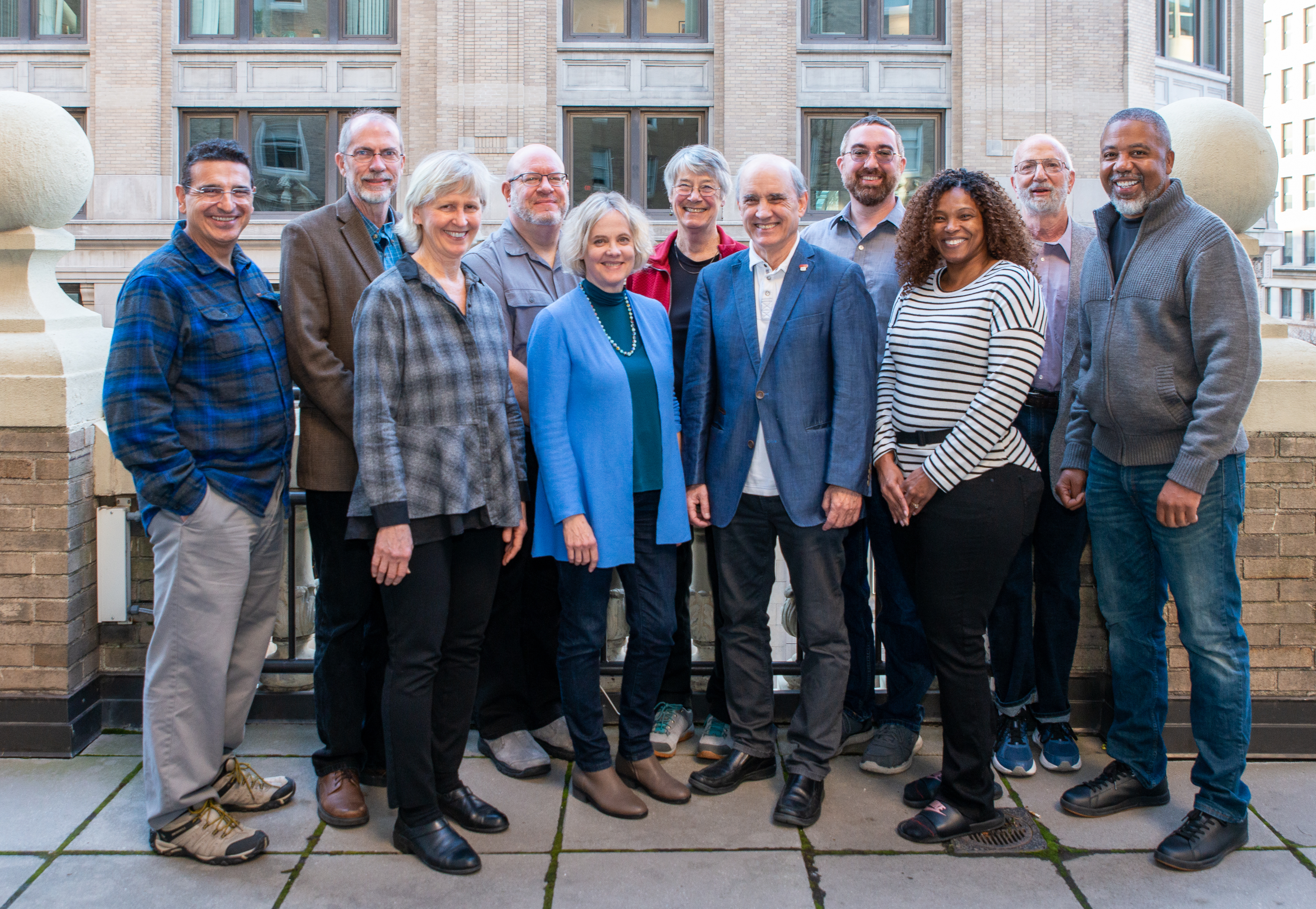 The governing Executive Board of Directors, elected by the large advisory body of State Representatives, serve 3-year terms. 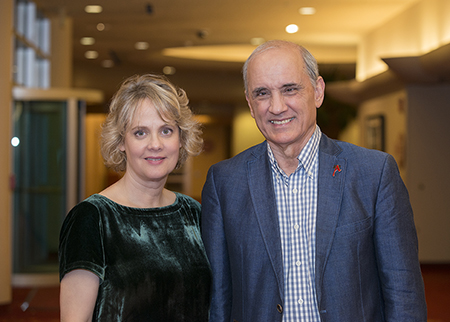 DAN BARKER and ANNIE LAURIE GAYLOR are co-presidents of the Freedom From Religion Foundation and co-hosts of Freethought Radio and Freethought Matters (TV). A former minister and evangelist, Dan became a freethinker in 1983. His books, Just Pretend: A Freethought Book for Children and Losing Faith in Faith: From Preacher To Atheist (1992) are published by FFRF. Other books include Godless (Ulysses Press, 2008), The Good Atheist: Living a Purpose-Filled Life Without God (Pitchstone Publishing, 2011), Life Driven Purpose: How an Atheist Finds Meaning, Pitchstone Press (2015), GOD: The Most Unpleasant Character in All Fiction (Sterling Publications, 2016), and Free Will Explained: How Science and Philosophy Converge to Create a Beautiful Illusion. A graduate of Azusa Pacific University with a degree in religion, Dan now puts his knowledge of Christianity to effective freethought use. A professional pianist and composer, Dan performs freethought concerts and is featured in FFRF’s musical CDs, "Friendly Neighborhood Atheist," "Beware of Dogma,” and “Adrift on a Star." He joined FFRF's staff in 1987, serving as public relations director. He was first elected co-president in November 2004, speaks widely and has engaged in more than 100 debates about religion.

Annie Laurie Gaylor, a third-generation freethinker, co-founded FFRF with her mother Anne Gaylor as a college student in 1976. She served as editor of Freethought Today, FFRF’s newspaper, from 1985 to 2009. Her book, Woe to the Women: The Bible Tells Me So, first published by FFRF in 1981, is in its 4th printing. In 1988, FFRF published Betrayal of Trust: Clergy Abuse of Children, the first book documenting widespread sexual abuse by clergy. Her 1997 anthology, Women Without Superstition: 'No Gods, No Masters,’ is the first collection of the writings of historic and contemporary women freethinkers. A 1980 graduate of the University of Wisconsin-Madison Journalism School, she was an award-winning student reporter and recipient of the Ken Purdy scholarship. After graduation, she founded, edited and published the Feminist Connection, a monthly advocacy newspaper, from 1980–1985. She first joined the FFRF staff in 1985. She has been co-president since 2004. In the late 1970s, her student protest ended commencement prayers at the UW-Madison. She has been plaintiff in or overseen many state/church lawsuits and actions by FFRF. Dan and Annie Laurie have appeared on a variety of TV news shows, including “Oprah,” “O’Reilly,” “Good Morning America,” Univision, CNN and FOX news segments, CBS Evening News and ABC World News Tonight. 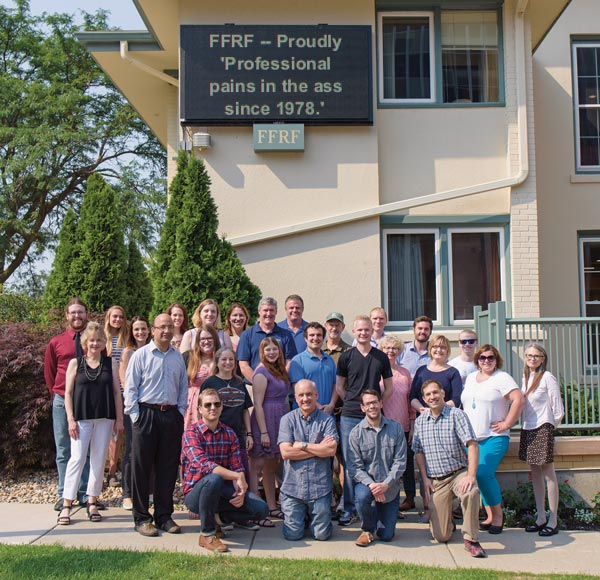 and see a historic slideshow here >> 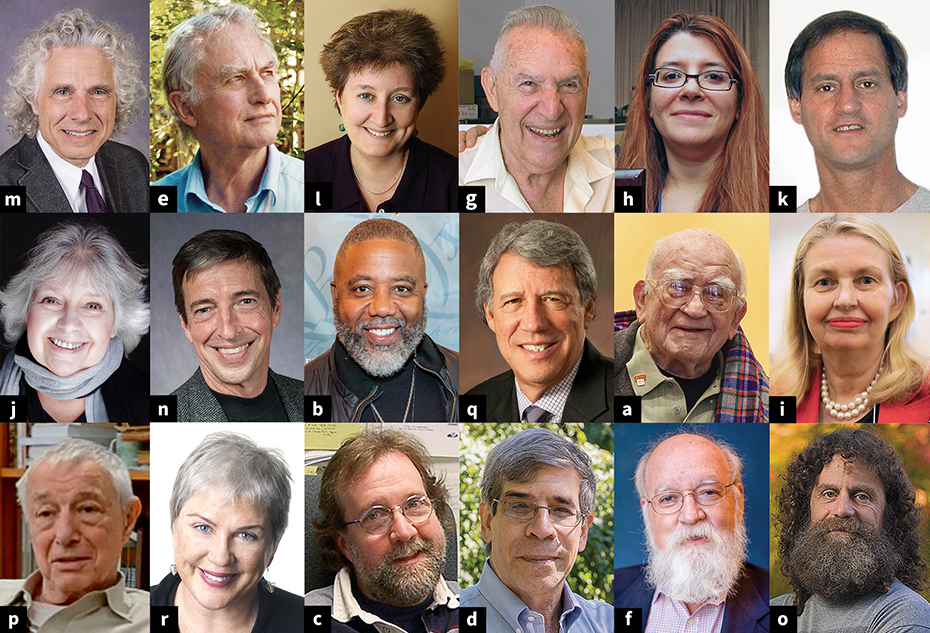 Ed Asner, movie and stage actor, TV ("Lou Grant") legend, winner of seven acting Emmy Awards, comedian and dramatist, has been a trade union and political activist, and two-term president of the Screen Actors Guild. He voiced Ralph in the beloved film, "Up," and portrayed Santa in "Elf."

Jeremiah Camara is filmmaker of "Holy Hierarchy: The Religious Roots of Racism in America" (2018), "Contradiction: A Question of Faith" (2013), and other films, and author of the books Holy Lockdown: Does the Church Limit Black Progress? and The New Doubting Thomas: The Bible, Black Folks & Blind Belief. He's also creator the widely-watched YouTube video series "Slave Sermons."

Sean B. Carroll, professor of molecular biology, genetics and medical genetics act the University of Wisconsin, is author of 'Brave Genius', 'Remarkable Creatures', 'The Making of the Fittest' and 'Endless Forms Most Beautiful.'

Jerry Coyne, Ph.D., professor of ecology and evolution at the University of Chicago, is author of the popular book 'Why Evolution is True' and the blog of the same name.

Richard Dawkins, probably the world’s most famous contemporary atheist and a distinguished evolutionary biologist, is Oxford professor emeritus. In his blockbuster book, The God Delusion, Dawkins writes: “The God of the Old Testament is arguably the most unpleasant character in all fiction.”

Daniel C. Dennett is Austin B. Fletcher Professor of Philosophy, Tufts, and author of the bestselling book about religion, Breaking the Spell. In a newspaper article about his nonbelief, Dennett once wrote: “I’ve come to realize it’s time to sound the alarm.”

Rebecca Newberger Goldstein, author of 36 Arguments For the Existence of God: A Work of Fiction and a research associate in Harvard’s psychology department, is FFRF Freethought Heroine of 2011. Goldstein is a 1996 MacArthur Fellow (the “genius” award). She has taught at Barnard and in the Columbia MFA writing program and the Rutgers philosophy department. She’s been a visiting scholar at Brandeis and at Trinity College in Hartford.

Ernie Harburg, a retired research scientist, is president of Yip Harburg Foundation and co-author of Who Put the Rainbow in the Wizard of Oz? Ernie has dedicated his retirement to furthering the lyrics, music, memory and progressive views of his freethinking father, the lyricist Yip Harburg, author of classic songs such as “Somewhere Over the Rainbow” and of Rhymes for the Irreverent, recently republished by FFRF.

Jennifer Michael Hecht, poet, historian and author of the acclaimed Doubt: A History and The End of the Soul, told the FFRF 2009 convention audience: “If there is no god — and there isn't — then we [humans] made up morality. And I'm very impressed.”

Susan Jacoby, bestselling author of Freethinkers: A History of American Secularism, and program director of the Center for Inquiry-New York City, told FFRF convention-goers in 2004: "[President] Kennedy had to speak about his religion because he was suspected of insufficient dedication to the Constitution's separation of church and state. Today's candidates are suspect if they display too much dedication to secular government."

Robin Morgan, feminist pioneer, global activist, author of the groundbreaking "Sisterhood is Powerful" and more than 20 books, was formerly Ms. Magazine editor and consulting editor. She is the co-founder of the Feminist Women's Health Network and Women's Media Center and currently hosts "Women's Media Center Live" the radio "talk-show with a brain."

Mike Newdow is working pro bono to challenge such violations as the addition of “under God” to the Pledge of Allegiance. He told the U.S. Supreme Court during oral arguments: “I am an atheist. I don't believe in God. And every school morning my child is asked to stand up, face that flag, put her hand over her heart, and say that her father is wrong.”

Katha Pollitt, “Subject to Debate” columnist for The Nation, author and poet, has spoken out regularly and energetically as a freethinker, in such columns as “Freedom From Religion, Sí!”

Steven Pinker, Johnstone Professor of Psychology, Harvard, is author of The Blank Slate: “I never outgrew my conversion to atheist at 13.”

Ron Reagan, media commentator, describes himself in a radio ad he taped for FFRF as: “Unabashed atheist, not afraid of burning in hell.”

Robert Sapolsky, a neurologist, Stanford professor and bestselling author, once suggested FFRF put up a sign at its conventions: “Welcome, hellbound atheists.”

Edward Sorel, satiric cartoonist and irreverent illustrator who is a regular contributor to The Atlantic, The New Yorker, and whose caricatures have been exhibited at the National Portrait Gallery, has been a Foundation member since the 1980s.

Geoffrey R. Stone, Edward H. Levi Distinguished Service Professor at the University of Chicago, joined the faculty in 1973, after clerking for Supreme Court Justice William J. Brennan. He later served as dean of the Law School (1987-1994) and provost of the University of Chicago (1994-2002). Stone is the author of many books on constitutional law, including Sex and the Constitution: Sex, Religion and Law from America’s Origins to the Twenty-First Century (2017).

Julia Sweeney, comedian and actress, is writer/performer of the play, “Letting Go of God”: “How dare the religious use the term 'born again.' That truly describes freethinkers who've thrown off the shackles of religion so much better!” 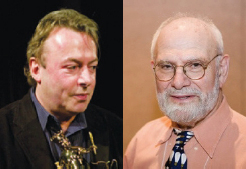 Christopher Hitchens, the iconoclastic journalist, was author of the bestselling God Is Not Great: “Since it is obviously inconceivable that all religions can be right, the most reasonable conclusion is that they are all wrong.”

Oliver Sacks, M.D., the compassionate neurologist and bestselling author, described himself as “an old Jewish atheist.” 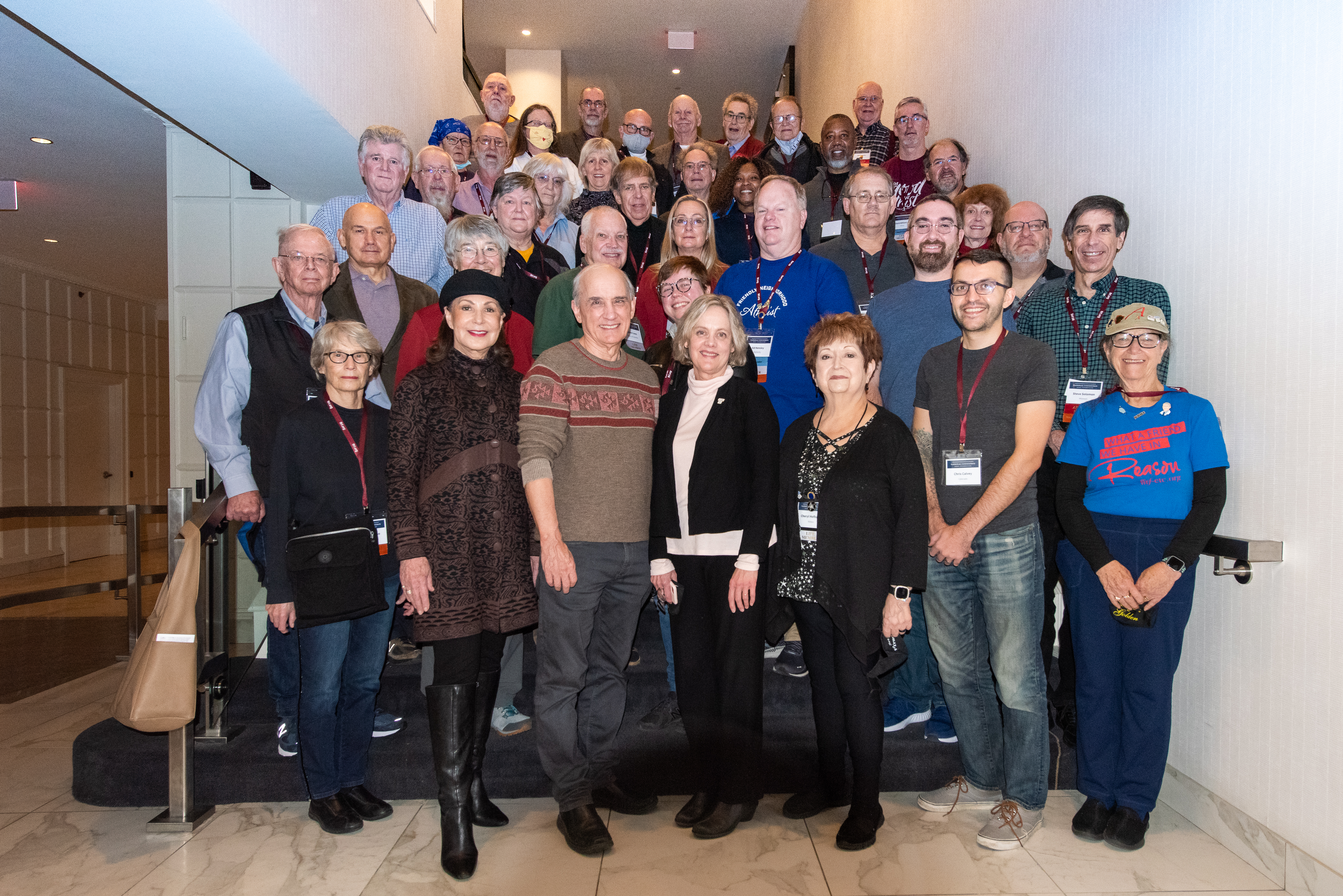 FFRF held its annual State Representatives meeting on Nov. 21 at the Park Plaza Hotel in Boston.

Here is the 2021 list of the State Reps, although not all were in attendance at the meeting.

Anne Nicol Gaylor, the principal founder of the Freedom From Religion Foundation and president from 1978-2004, was given a surprise Emperor Has No Clothes Award on October 29, 2004, at the end of a tribute the year she formally stepped down as president. In her years of outspoken feminist and freethought activism, where her common-sense pronouncements on the harm of religion turned her into a media lightning rod, nobody better embodies the child in the fairy tale who "tells it like it is." Read on for tributes:

View a slideshow of Anne's fascinating career of activism, with personal photographs and media coverage