There are 1 entries for this date: Emma Goldman 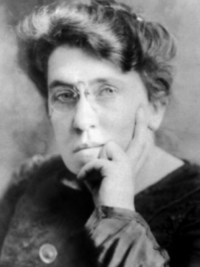 On this date in 1869, Emma Goldman was born in Russia. "Since my earliest recollection of my youth in Russia I have rebelled against orthodoxy in every form," she wrote in her 1934 article "Was My Life Worth Living?" Told by her father that "a Jewish daughter" needed only to prepare for marriage, the defiant 17-year-old emigrated with her sister to New York, taking factory work. After the 1887 Haymarket bombing and execution of arguably innocent anarchists in Chicago, Goldman threw herself into her "ecstatic song" of political oratory.

She and Alexander "Sasha" Berkman dedicated themselves to a "supreme act" for which Berkman spent 14 years in prison — attacking Henry Clay Frick, chair of Carnegie Steel Corp. Goldman would later repudiate her youthful conviction that the ends justified the means. She was arrested numerous times as a famed orator and went underground when a self-professed anarchist madman in 1901 assassinated President William McKinley, saying he had once attended one of her lectures.

In 1906 she launched the journal Mother Earth. In 1916 she was sent to prison for advocating that "women need not always keep their mouths shut and their wombs open." In 1917 she was arrested, convicted and served two years in prison for setting up the No Conscription League. A warden said women worshipped her like an idol because she nursed and fought for women prisoners.

At age 50 in 1919, she and 247 other "Reds" were deported to the Soviet Union through the efforts of J. Edgar Hoover. Thoroughly disillusioned with Bolshevism, she became a British citizen in 1925. She wrote her autobiography in 1931. Her two essays, "The Failure of Christianity" (1913) and "The Philosophy of Atheism" (1916) contain her freethought views. She died in Canada at age 70. (D. 1940)

“I do not believe in God, because I believe in man. Whatever his mistakes, man has for thousands of years been working to undo the botched job your god has made. There are ... some potentates I would kill by any and all means at my disposal. They are Ignorance, Superstition, and Bigotry — the most sinister and tyrannical rulers on earth.”