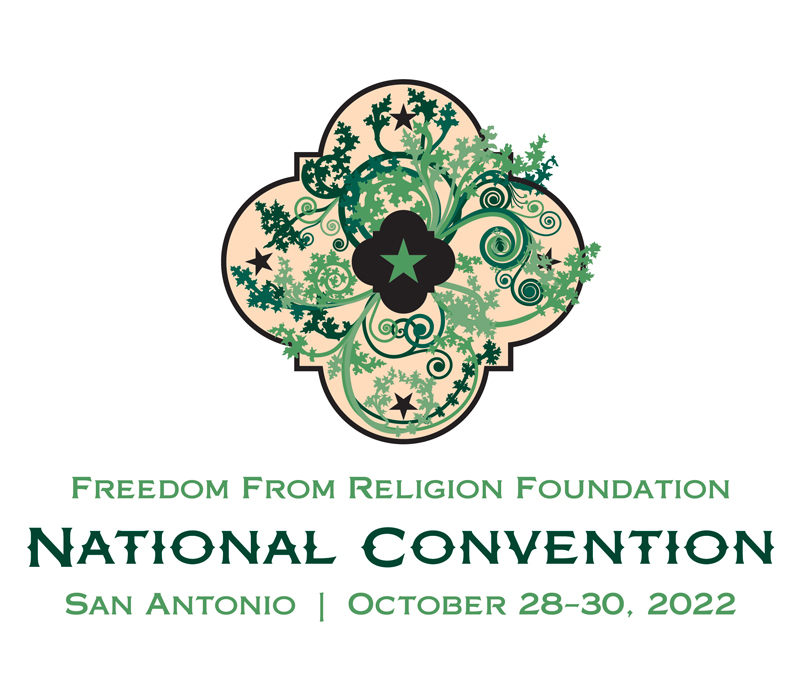 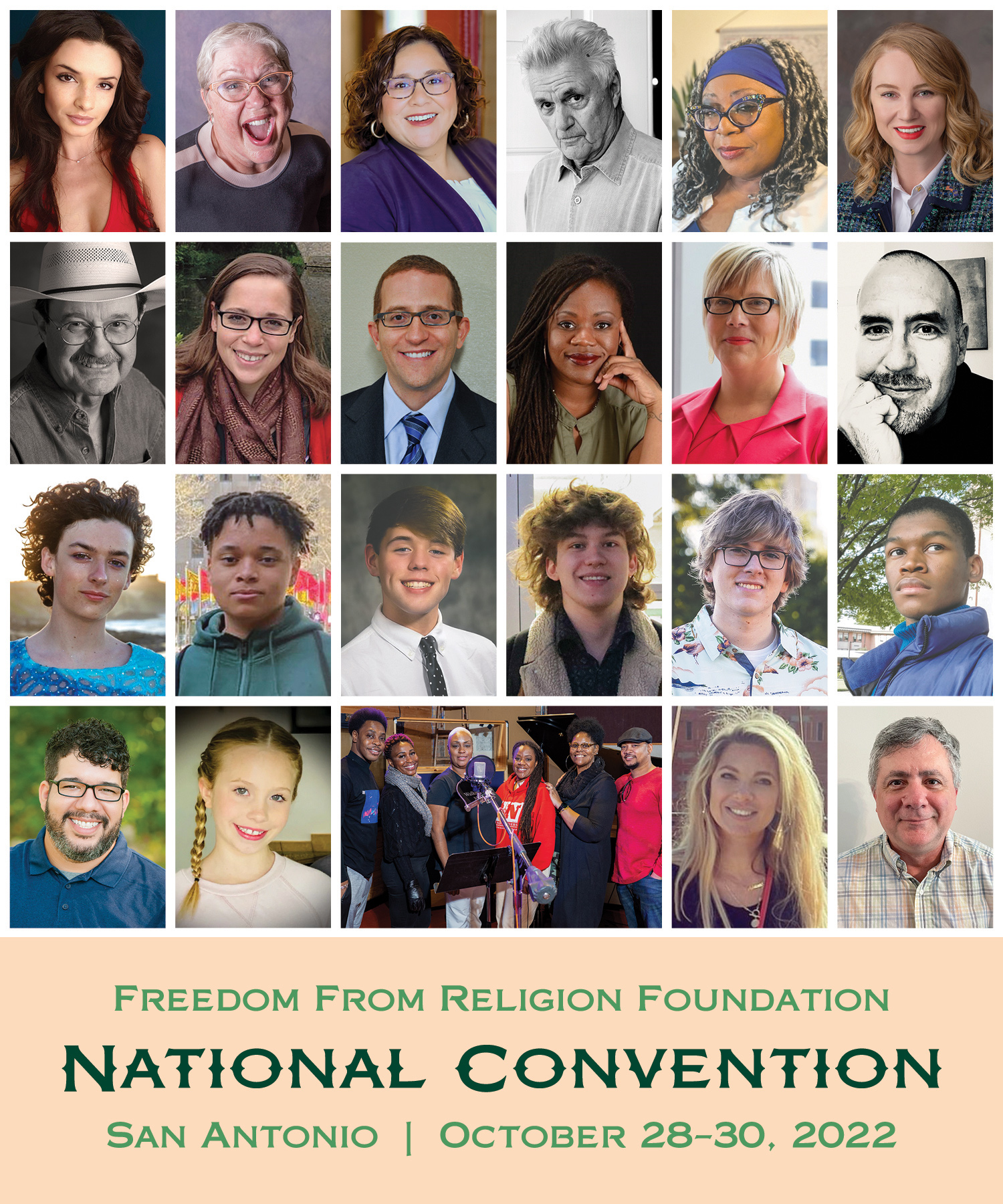 Each day brings us one day closer to the always entertaining FFRF convention! This year’s convention in San Antonio will feature awesome speakers, FFRF award winners, great meals, late-night treats, a “clean” money drawing, and of course, the opportunity to interact with other like-minded people.

FFRF’s 45th annual convention will be held Friday, Oct. 28, and Saturday, Oct. 29, at the Hyatt Regency on the Riverwalk in San Antonio. The conference begins with an optional “early bird” registration and reception late Thursday afternoon, Oct. 27, and concludes after the Sunday morning meetings of the membership and FFRF State Representatives, ending by noon. Please make your room reservations soon, and no later than Friday, Oct. 7, at the Hyatt Regency San Antonio by calling 210-222-1234, or clicking here. Overflow options are available at the Hilton Garden Inn or Menger Hotel.

This year’s theme is “DO Mess with Texas,” a state that has become ground zero for theocratic policymaking.

Headliners include author John Irving, who will give the keynote Saturday night, and comedian/actor Julia Sweeney, who will deliver the keynote on Friday night.

Sweeney last spoke at FFRF’s convention in Madison in 2019 when she performed a portion of her “Older and Wider” one-person monologue. Sweeney is a former “Saturday Night Live” actor and also the author of several books, including If It’s Not One Thing, It’s Your Mother and God Said ‘Ha!’

Irving, the bestselling award-winning novelist of 14 books, including The World According to Garp and The Cider House Rules, will be receiving FFRF’s Emperor Has No Clothes Award.

Another speaker who is an expert at “messing with Texas” will be Val Benavidez, director of the Texas Freedom Network.

Nebraska state Sen. Megan Hunt, who publicly identifies as an atheist, is a stalwart against Christian religious extremists in her home state, and will receive FFRF’s “Champion of the First Amendment” award.

Another “Champion of the First Amendment” will be Professor Anthea Butler, author of White Evangelical Racism. She is associate professor of religious studies and Africana studies at the University of Pennsylvania. Butler’s research and writing spans African American religion and history, race, politics, evangelicalism, gender and sexuality, media and popular culture.

Convention attendees will also get to hear from Adrienne Martin, whose speech against the promotion of religion in local school board meetings went viral in August. She is a lifelong Texan, mother and chair of the Hood County Democratic Party. Adrienne has been fighting book banning, advocating against discrimination and organizing to promote equality in conservative rural Texas.

Daniel Mach, director of the ACLU Program on Freedom of Religion and Belief, will accept on behalf of the ACLU FFRF’s Henry Zumach Freedom From Religious Fundamentalism Award.

Also appearing will be 17-year-old activist Will Larkins, a nonreligious student who received an FFRF activist award for becoming a national figurehead in testifying against Florida’s “Don’t Say Gay” bill and leading a walkout at his high school.

As a special musical treat, “Godless Gospel” — a collaboration between artistic producer Andre Forbes and FFRF Co-President Dan Barker — will debut. The distinguished singers include Candace R.M. Gorham, author of The Ebony Exodus Project, Tahira Clayton, a New York City jazz vocalist who also belts out gospel, Rogiérs Fibby, president of Black Nonbelievers of DC, Cynthia McDonald, an activist with Freedmen of Chicago, DeAngela Morant, of Florida, and Mandisa Thomas, president of Black Nonbelievers. They will also participate in a panel discussion on African American nonbelievers.

Actress and founder of Dare to Doubt, Alice Greczyn, will be receiving FFRF’s “Freethought Heroine” Award. Other speakers include author Hector A. Garcia, of San Antonio. He’s given a TED Talk and has written Alpha God: The Psychology of Religious Violence and Oppression.

The youngest honoree will be 11-year-old Elle Harris, receiving the debut “Out of God’s Closet,” a $5,000 student scholarship endowed by the late Diane Uhl, as the author of Elle the Humanist.

Several of the top finishers in FFRF’s essay contests will also read their award-winning entries.

Concurring optional workshops Friday at noon will include one on what people can do to help stop the religious war against reproductive rights, conducted by FFRF’s contributing writer Barbara Alvarez, and another, “On Death, Dying and Disbelief,” led by Candace R.M. Gorham, based on her book of the same name.

Included will be reporting on FFRF’s achievements over the year by FFRF Co-Presidents Dan Barker and Annie Laurie Gaylor, the report on legal activism and achievements by FFRF attorneys, headed by Legal Director Rebecca Markert, and a reprise of last year’s popular workshop, “Ask an Attorney.”

The convention will feature book and product sales tables, the popular “NonPrayer Breakfast,” and a drawing for “clean,” pre-“In God We Trust” currency.