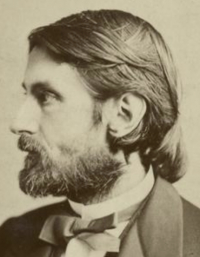 On this date in 1822, biographer James Parton was born in Canterbury, England. His father died when he was 4 and he moved with his mother and siblings to New York the next year. He became a schoolmaster in Philadelphia and New York. He joined the staff of the Home Journal in 1848. After writing The Life of Horace Greeley (1855), Parton turned to biography and lecturing. He became a U.S. citizen in 1845.

“In the days when to be an Agnostic was to be almost an outcast, [Parton] had the heart to say of the Mysteries that he did not know.” 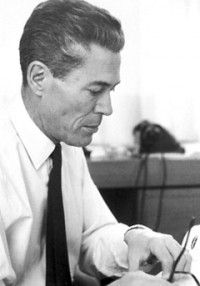 On this date in 1910, French biologist and Nobel Prize winner Jacques Lucien Monod was born in Paris to an American mother (Charlotte MacGregor Todd from Milwaukee) and a French Huguenot father, Lucien Monod, who was a painter and inspired him artistically and intellectually. In his doctoral work at the Sorbonne, Monod coined the term diauxie, meaning two growth phases, to describe different growth patterns he observed in bacteria. Monod is most famous for discovering, along with Francois Jacob and Andre Lwoff, the Lac operon feedback mechanism in living cells.

Monod received the 1963 Legion d’honneur, the highest decoration in France, for the operon theory of genetic control. The 1965 Nobel Prize in Physiology or Medicine was awarded jointly to Monod, Jacob and Lwoff “for their discoveries concerning genetic control of enzyme and virus synthesis,” according to the Nobel Foundation website. Monod was among the first to suggest the existence of messenger RNA molecules. He's considered one of the founders of molecular biology.

In addition to his scientific work, Monod was a talented musician and wrote on the philosophy of science. In his 1971 book, Chance and Necessity, he expounded on “an entirely non-providential view of the biological world as the mere product of chance and necessity, and proposed that the natural sciences reveal a purposeless world which entirely undercuts the tradition claims of religions.” (Cambridge University website, “Investigating Atheism.”)

In 1938 Monod married Odette Bruhl, an archaeologist and curator of the Guimet Museum in Paris. Their twin sons became a geologist and a physicist. He died of leukemia in 1976 and is buried in Cannes on the French Riviera.

"As nontheists, we begin with humans not God, nature not deity."

—Humanist Manifesto II (1973), of which Monod was one of the signatories when he was at the Institut Pasteur. 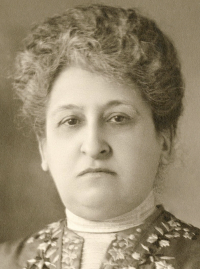 On this date in 1854, women's rights pioneer Aletta Henriette Jacobs was born the eighth of twelve children to Jewish parents in Sappemeer, the Netherlands. Jacobs wanted to be a physician like her father and brother at a time when there were no female doctors in the Netherlands. She was admitted first to Groningen University and then to Amsterdam University as the only woman studying medicine at each institution. She founded the first birth control clinic in the world in Amsterdam in 1882 and earned her doctorate the following year.

In 1884 she married Carel Gerritsen, a feminist and alderman of Amsterdam and member of the Dutch parliament. Since neither were religious, they opted for a civil ceremony, uncommon for the time. She started a medical practice specializing in treating women and children (often treating poor women for free), which she ran for 25 years. She assembled a library of about 2,000 women's studies books in German, French, Dutch and English titles — languages she was fluent in — now housed at the University of Kansas. She retired from medicine in 1903, the year Gerritsen died, to devote her life to feminism and pacifism.

Jacobs embarked on a woman's suffrage world tour with Carrie Chapman Catt in 1911, asserting that suffrage was the most important means for women's emancipation. She headed the Dutch Woman Suffrage Association, founded in 1894, and often participated in the International Women's Suffrage Alliance, presided over by Catt. By the time her memoir was published in 1924, women had gained the right to vote in Holland and many other European countries.

In a letter Jacobs wrote to Catt in 1928, the year before her death, she said: "My dear Carrie, I feel sure we have not lived for nothing. We have done our task and we can leave the world with the conviction that we have left it in a better condition than we have found it." D. 1929.

"As a freethinker, she belonged to no organized religious community and disliked religion of any kind."

—Harriet Feinberg, editor of Jacobs' memoir "Memories: My Life as an International Leader in Health, Suffrage, and Peace" (1996) 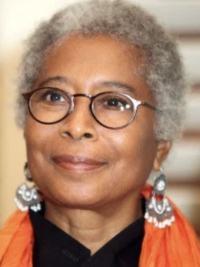 On this date in 1944, novelist, poet and self-described "Earthling" Alice Malsenior Tallulah-Kate Walker was born in Eatonton, Georgia, the youngest of eight children in a sharecropping family. Blinded in one eye during a childhood accident, she went on to become valedictorian at her high school and attended both Spelman College and Sarah Lawrence College on scholarships. Walker graduated from Sarah Lawrence in 1965. She worked on voter registration drives in the 1960s and married fellow civil rights worker Melvyn Leventhal in 1967. They had a daughter, Rebecca, in 1970 and divorced in 1976.

Her first book of poetry was published in 1970. Walker edited I Love Myself When I Am Laughing and Then Again When I Am Looking Mean and Impressive: A Zora Neale Hurston Reader in 1979, introducing and popularizing Hurston to a new generation.

The Color Purple, Walker's bestselling 1982 novel, won the Pulitzer Prize in 1983 and was turned into a popular movie by Steven Spielberg. Walker introduced the term "womanist" to the feminist movement to describe African-American feminism. Her books of essays include In Search of Our Mother's Gardens: Womanist Prose (1983), Alice Walker Banned (1996) and Anything We Love Can Be Saved: A Writer's Activism (1997).

Walker's views on religion are expressed in "The Only Reason You Want to Go to Heaven Is That You Have Been Driven Out of Your Mind (Off Your Land and Out of Your Lover's Arms): Clear Seeing Inherited Religion and Reclaiming the Pagan Self" (anthologized in Anything We Love Can Be Saved). Raised as a Methodist by devout parents, early in life she observed church hypocrisy, especially the silencing of the women who cleaned the church and kept it alive. "Life was so hard for my parents' generation that the subject of heaven was never distant from their thoughts. ... The truth was, we already lived in paradise but were worked too hard by the land-grabbers to enjoy it."

In The Color Purple, the protagonist rebels against a God who [vernacular ahead] "act just like all the other mens I know. Trifling, forgitful and lowdown." Walker, rebelling against the misogyny of Christian teachings and the imposition of a white religion upon the enslaved, wrote: "We have been beggars at the table of a religion that sanctioned our destruction."

Walker added: "All people deserve to worship a God who also worships them. A God that made them, and likes them. That is why Nature, Mother Earth, is such a good choice. Never will Nature require that you cut off some part of your body to please It; never will Mother Earth find anything wrong with your natural way."

"It is chilling to think that the same people who persecuted the wise women and men of Europe, its midwives and healers, then crossed the oceans to Africa and the Americas and tortured and enslaved, raped, impoverished, and eradicated the peaceful, Christ-like people they found. And that the blueprint from which they worked, and still work, was the Bible.” 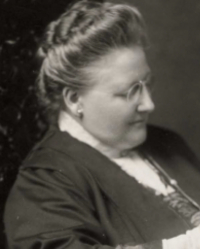 On this date in 1874, poet Amy Lawrence Lowell was born in Brookline, Mass. Her father, a cousin of James Russell Lowell, was also related to Robert Lowell. Amy grew up in a house her father dubbed "Sevenels" (because seven Lowells lived there). Lowell at first had a British governess and became famous in her family for her creative misspellings. As a popular debutante, known for her dancing and conversational style, she had no less than 60 dinners thrown for her.

Because it was not considered "proper" by her family for young women to go to college, she was denied a higher education, but made use of her family's extensive library to educate herself. After a failed engagement and growing obesity, probably stemming from a glandular condition, Lowell was exiled to Egypt in 1897-98 to help her forget her troubles and also lose weight. The imposed spartan regimen nearly killed her.

She started writing poetry in 1902 and met actress Ada Dwyer Russell in 1912, with whom she had a "Boston marriage" for the rest of her life. Her first of several books of poems, Men, Women & Ghosts, was published in 1916. Lowell wrote Tendencies in Modern American Poetry (1917). Her biography of John Keats appeared in 1925. What's O'Clock, posthumously published in 1925, was awarded a $1,000 Pulitzer Prize for the best volume of verse published during the year by an American author.

Lowell penned more than 650 poems before her death from a cerebral hemorrhage at age 51in 1925.

And every year when the fields are high
With oat grass, and red top, and timothy,
I know that a creed is the shell of a lie. 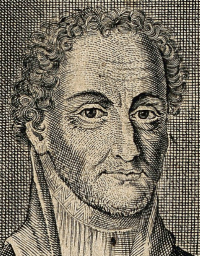 On this date in 1619, Catholic friar Giulio Cesare Vanini (né Lucilio Vanini) was executed for heresy in Toulose, France. Born in 1585 in Italy, Vanini was educated in philosophy and theology at Rome University and entered the Carmelite order in 1603 as Fra Gabriele before studying canon and civil law in Padua. He traveled widely throughout Europe, espousing his rationalist viewpoints and supporting himself by giving lessons. He was also an early proponent of biological evolution among the first modern thinkers to view the universe as an entity governed by natural laws.

Vanini was driven from France in 1614. After taking refuge in England, he spent 49 days in the Tower of London. Returning to Italy, he was driven out of Genoa. Vanini went to southern France, where he published a book critical of atheism in 1615 in an attempt to clear himself from charges of heresy.

The following year his second book was published, which is credited with being closer to his real views, in which he advanced a naturalistic philosophy. The book was ordered burned by the Sorbonne, and Vanini was charged with atheism. He was arrested in 1618 and sentenced to have his tongue cut off, to be strangled at the stake and to have his body reduced to ashes. It is said he refused the ministrations of a priest.