There are 1 entries for this date: John Keats 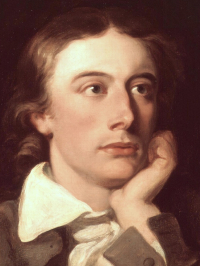 On this date in 1795, Romantic poet John Keats was born in London, the son of a livery stable manager. His father died in an accident in 1804 and his mother died of tuberculosis in 1810.  Keats' childhood was very unsettled but he was educated at Clarke's School in Enfield and apprenticed to be a surgeon-apothecary. He studied surgery in London but was inclined to pen verses instead of taking notes during class.

His first real poem was written in 1814. He met Leigh Hunt, editor of The Examiner, and through him met other Romantic poets, including Shelley. Keats' first book, Poems, was published in 1817. His first long poem, Endymion, was published when he was 21, followed by some of his most famous poems, including "Ode to a Nightingale" and "Ode on a Grecian Urn."

In 1818 he nursed his brother as he was dying of tuberculosis and started work on "Hyperion." His second volume of poetry appeared in 1820 to critical acclaim. By then he was ill himself with tuberculosis and depressed over his thwarted romance with Frances (Fanny) Brawne, a spirited young acquaintance who considered Keats too poor to be marriageable. Keats' death was a tortured, drawn-out ordeal of more than a year. He ended his days in Italy.

Although invited by Shelley to visit him in Pisa, Keats instead traveled to Rome, where he died in 1821 at only 25, requesting of a friend that his tombstone be engraved with only one line: "Here lies One whose Name was writ in Water." (But it contained more words than that.) His last years and his relationship with Brawne were chronicled in the 2009 film "Bright Star."

Keats was a critic of religion who eschewed religious ritual before his death and expressed his views in his many letters against "the pious friends of Religion" (cited in The Encyclopedia of Unbelief, ed. Gordon Stein, 1985). His 1816 poem "Written in Disgust of Vulgar Superstition" said Christianity was "dying like an outburnt lamp."