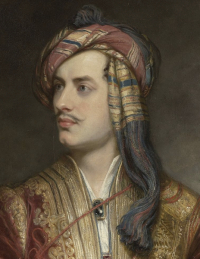 On this date in 1788, poet George Gordon, Lord Byron was born in London. Byron became the toast of London after writing Childe Harold. He also wrote Don Juan, The Prisoner of Chillon and Cain, which was denounced from the pulpits. A classical deist, Byron refused to take the oath when seated in Parliament. He supported many liberal causes, including Greek independence from the Ottoman Empire, a cause for which he gave more than mere lip service.

Byron committed £4,000 of his personal fortune to upgrade the Greek navy and took charge of a group of Greek fighters in Missolonghi. Eulogized as a "soldier-poet of freedom" after dying in 1824 in Greece at age 36 of an infection now suspected to be malaria, the tempestuous Byron had so scandalized society that he was refused burial in Westminster Abbey.

Even Gods must yield –
Religions take their turn:
'Twas Jove's – 'tis Mahomet's –
and other Creeds
Will rise with other years, till
Man shall learn
Vainly his incense soars, his
victim bleeds;
Poor child of Doubt and Death,
whose hope is built on reeds. 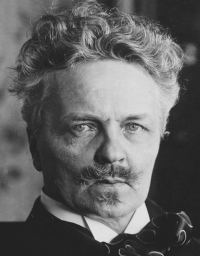 On this date in 1849, dramatist and novelist Johan August Strindberg, one of nine children, was born in Stockholm, Sweden. His family was poor, as demonstrated by the title of his autobiography, The Son of a Servant (1886). He attended Upsala University and, while working at the Royal Library in Stockholm, wrote a popular novel, Roda rummet (1879), which made him a national celebrity. The author of more than 70 plays, he is considered an important influence to modern playwrights.

His 1882 religious satiric story, Det nya riket (The New Kingdom), created such a ruckus he had to leave the country. When he returned he became an active leader with the Swedish Rationalists. He corresponded with Nietzsche and was an admirer of Edgar Allan Poe. A passage with an unorthodox description of the Last Supper in his collection of his stories, Giftas (1884), was censored as anti-Christian and Strindberg was charged with blasphemy.

Although in Switzerland at the time, he returned to Sweden to face charges and was acquitted. He suffered a mental breakdown, which he never really recovered from, in the late 1890s, although he remained active in theater. D. 1912. 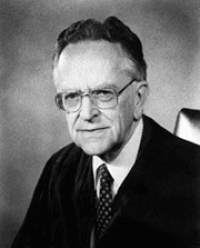 “This right of privacy, whether it be founded in the Fourteenth Amendment's concept of personal liberty and restrictions upon state action, as we feel it is, or, as the District Court determined, in the Ninth Amendment's reservation of rights to the people, is broad enough to encompass a woman's decision whether or not to terminate her pregnancy. The detriment that the State would impose upon the pregnant woman by denying this choice altogether is apparent. Specific and direct harm medically diagnosable even in early pregnancy may be involved. Maternity, or additional offspring, may force upon the woman a distressful life and future. Psychological harm may be imminent. Mental and physical health may be taxed by child care. There is also the distress, for all concerned, associated with the unwanted child, and there is the problem of bringing a child into a family already unable, psychologically and otherwise, to care for it. In other cases, as in this one, the additional difficulties and continuing stigma of unwed motherhood may be involved. All these are factors the woman and her responsible physician necessarily will consider in consultation.” 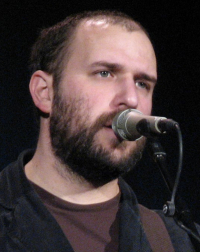 On this date in 1976, indie rock singer and songwriter David Bazan was born in Seattle. Bazan grew up with a passion for music that stemmed from influential figures in his life, such as his father who was a music pastor. Consequently, he started his singer-songwriter career by performing for church youth groups. Bazan spent his childhood in Christian schools and graduated from Northwest University, a Pentecostal college in Kirkland, Wash.

Bazan began questioning the logic of his Christian experience around eighth or ninth grade, but did not truly begin to inquire into his faith until his early 20s. "Growing up, Christianity didn't feel oppressive for the most part, because it was filtered through my parents. They were and are so sincere, and I saw in them a really pure expression of unconditional love and service. Once I stepped away, I could see the oppression of it," he said in the Chicago Reader (July 30, 2009). The article was subtitled "At the Cornerstone Christian rock festival, a fallen evangelical returns to sing about why he broke up with God."

Unsatisfied with the hardcore alternative music scene in Seattle, Bazan formed his own band, Pedro the Lion, in 1995 while still attending Northwest. The music produced by the band followed a path of a struggling believer becoming a restless one, which began to attract a strong secular fan base. His debut album as a solo artist, “Curse Your Branches,” was released in 2009. The album is an autobiographical depiction of the process Bazan went through contemplating his faith. The opening song is set in the Garden of Eden.

During the summer of 2009, he returned to the Cornerstone stage to perform his new music explaining why he is unable to continue a relationship with God. His other prominent works include “Blanco” (2016), “Dark Sacred Night” (2016) and “Care” (2017).

“One of the interesting parts about Christianity, at least the way that I experienced it, was that you are in a sense responsible for this whole system of thought and belief that you literally don’t have a chance to investigate thoroughly. When you do come in contact with certain bits of information for the first time, it’s not like, ‘Hey, check this out. See what you think. Reject it or accept it.’ It’s always that you’re discovering this system that you’ve already signed on the dotted line affirming.” 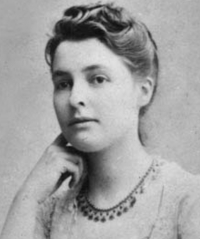 On this date in 1858, Beatrice Webb (née Beatrice Potter) was born in Gloucestershire, England. The eighth of nine sisters, Potter's mother resented her for not having been born a boy. Like most Victorian girls, Potter received a poor education in spite of her father's wealthy career as a timber entrepreneur. Unusually though, her father, unlike most Victorian men, believed in the intellectual equality, if not superiority of women. As a teenager, with an increasingly inquisitive mind, Potter read every history, economy and philosophy book within reach and began to rebel against her privileged life.

Herbert Spencer, a close friend of the family, intrigued Potter with his "scientific method," which she believed could be applied to solve society's social problems. She was one of the first researchers to argue that poverty has underlying causes instead of being a deserved state. By 1885 her research, including on the English cooperative movement and housing projects for the poor, inspired her to break with capitalism and openly advocate socialism. The success of her research was her fearless commitment to disguise herself as one of her subjects (often poor workers) and immerse herself in their lifestyle.

In 1890 Potter needed historical information for an upcoming book on London sweatshops and was referred to socialist and reformist Sidney Webb. Webb fell in love with her but she rejected his proposals for marriage until it became apparent that they were deeply intellectually compatible. They married in 1892 and wrote their first of many books together, The History of Trade Unionism (1894). Personal friend H.G. Wells once described the Webbs as "the most formidable and distinguished couple conceivable" (Oxford Companion to English Literature, 1995).

The Webbs' influence on British government is still felt. Beatrice was among the first to conceive of a "national health plan," the basis for the National Health Service. She also apprenticed with Charles Booth, helping him write the influential study The Life and Labour of the People in London (1902-03). In opposition to Britain's 1934 Poor Law, the Webbs wrote a minority report which helped lay the foundation of Britain's social services system.

After joining the Fabian Society in the 1890s, the Webbs socialized with other freethinkers. Along with George Bernard Shaw and Graham Wallas, the Webbs founded The London School of Economics and Political Science in 1895 to train social scientists to promote "the betterment of society." The Webbs both held government posts throughout their later years. Together, they published around 500 books, articles, pamphlets and edited volumes. They are interred together in the nave of Westminster Abbey. D. 1943.

“That part of the Englishman's nature which has found gratification in religion is now drifting into political life.”