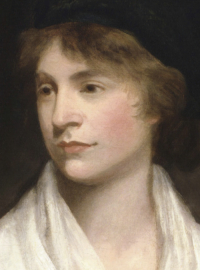 On this date in 1759, feminist author Mary Wollstonecraft was born in London, the second of seven children. An industrious young woman, she worked as a governess and then opened her own school. Her first book, Thoughts on the Education of Daughters, was published in 1786, followed by a novel, a children's book, a translation and The Female Reader (1789).

When Edmund Burke read her review of a sermon by dissenting minister Richard Price, he wrote a famous attack on the American and French revolutions. Wollstonecraft rebutted his polemic in her 1790 pamphlet "A Vindication of the Rights of Men, in a Letter to the Right Honourable Edmund Burke; Occasioned by His Reflections on the Revolution in France," attacking the aristocracy and advocating for republicanism.

Her seminal A Vindication of the Rights of Woman was published in 1792. The first influential book calling for the equality of the sexes, it urged that women be educated and treated as "rational creatures." Wollstonecraft championed dress reform, breast-feeding, early education and a national system of co-educational primary schools. She warned of those who prey "on the credulity of women."

She gave birth to a daughter after a brief liaison with Gilbert Imlay, an American businessman, then married atheist William Godwin in March 1797. After an uneventful pregnancy, 38-year-old Mary gave birth on Aug. 30, 1797 to a second daughter, Mary, then died of an infection 10 days later. Wollstonecraft was an ardent rationalist and deist who adopted an agnostic point of view toward the end of her life. Her daughter Mary ran off as a teenager with poet Percy Bysshe Shelley and wrote Frankenstein at age 19.

"Besides, in great schools, what can be more prejudicial to the moral character than the system of tyranny and abject slavery which is established amongst the boys ... which makes religion worse than a farce."

—Wollstonecraft, "A Vindication of the Rights of Woman" (1792) 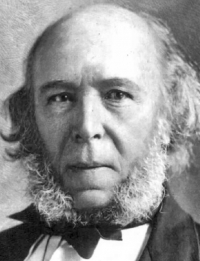 On this date in 1820, Herbert Spencer was born in England. The agnostic philosopher was educated in engineering but worked as a journalist and writer. Spencer became good friends with leading thinkers and writers, such as Thomas Huxley and novelist George Eliot. His Principles of Psychology was published in 1855, followed by a series of major works on the principles of biology, sociology, education and ethics.

“Religion has been compelled by science to give up one after another of its dogmas, of those assumed cognitions which it could not substantiate.” 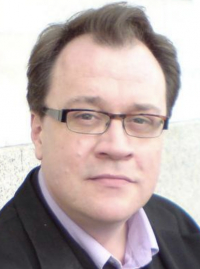 On this date in 1963, Stephen Russell Davies was born in Swansea, Wales. As a child he was called by his middle name, and he later adopted the professional name “Russell T Davies” in order to avoid confusion with a BBC Radio 4 presenter also named “Russell Davies.” As a child, Davies studied and acted with the West Glamorgan Youth Theatre in Swansea, where he also learned playwriting.

In 1984 he graduated from Oxford with a degree in English, then studied television direction at the BBC. He began to write and direct for television soon after, with his first big break in 1999, “Queer as Folk,” a drama about gay men living in Manchester that he created for Channel 4.

Davies was the showrunner and executive producer for the first four seasons of the revived “Doctor Who” on the BBC (2005-09), a family science fiction action-adventure show which he enlivened with deep characterization and occasional irreligious themes. He produced two "Doctor Who" spinoffs, “The Sarah Jane Adventures” (started in 2007), a children's adventure show, and the more adult “Torchwood,” an international co-production between BBC Worldwide, BBC Cymru Wales and Starz.

Davies, an "out" gay and atheist, often inserts atheist and homosexual themes into his work. “The only way I can write — whether that's good or bad — is to put my worldview into everything. I have to challenge that worldview from time to time, but in terms of the atheism of the show, I find that very powerful.” (The Boston Phoenix, July 24, 2009) He frequently depicts religion as nonexistent or very different in the future. In a nod to contemporary atheism, Richard Dawkins appears as himself as a talking head in the "Doctor Who" episode “The Stolen Earth.”

"Yes, I'm deeply atheist. If they haven't reached that point by the Year Five Billion, then I give up! When did the Doctor do that speech about believing in things that are invisible? It's Episode 5, isn't it? That's another bit of atheism chucked in. That's what I believe, so that's what you're going to get." 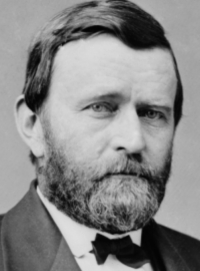 On this date in 1822, Ulysses S. Grant, né Hiram Ulysses Grant, 18th U.S. president, was born in Point Pleasant, Ohio. The Union victory at the end of the Civil War was credited to Grant, who became General of the Army. Grant was U.S. president from 1869 to 1877.

He was a favorite of irreverent author Mark Twain, who gave the keynote at a toast for Grant at the Palmer House in Chicago in 1879 as part of an illustrious lineup of speakers that included agnostic Robert G. Ingersoll. Twain was entrusted to publish Grant's Memoirs. He was not a member of any church and was never baptized.

After receiving eight demerits as a cadet at West Point for failure to attend chapel, he protested in a letter that it was "not republican" to be forced to go to church. (Brown's Life of Grant, cited by Franklin Steiner in The Religious Beliefs of Our Presidents.)

Grant was on record in favor of taxation of church property. In an annual address to Congress in 1875, he warned of "the importance of correcting an evil that if permitted to continue, will probably lead to great trouble in our land. ... It is the acquisition of vast amounts of untaxed Church property. ... I would suggest the taxation of all property equally." (D. 1885)

“Leave the matter of religion to the family altar, the Church, and the private schools, supported entirely by private contributions. Keep the church and state forever separate.” 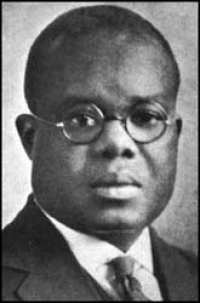 On this date in 1883, Hubert Henry Harrison was born in St. Croix, in the Danish West Indies (now the U.S. Virgin Islands). After his mother's death, Harrison left the West Indies for New York in 1900, where he earned a high school degree. From 1911 to 1914, he was active in the Socialist Party and, as perhaps its most prominent black member, he founded the Colored Socialist Club. Harrison was active in radical causes, as well as the fight for racial equality.

He eventually left the Socialists due to the movement's support of segregated local chapters in the South. He formed several black radical groups, the Liberty League in 1917 and the International Colored Unity League in 1924. Harrison's intellectual influence was widely felt in the Harlem Renaissance in the 1920s, where he was known as the Black Socrates, as well as the father of Harlem radicalism.

Harrison stated that his own doubts about religion were prompted by a reading of Thomas Paine. After he stopped believing in the bible, he was briefly a deist, before finally becoming an agnostic. Though he found Catholic ceremonies attractive and believed in the spiritual part of the human experience, he said in his essay “Paine's Place" (1911): “I doubt whether I will ever be anything but an honest Agnostic, because I prefer, as I once told you, to go to the grave with my eyes open.” (Quoted in Doubt: A History by Jennifer Michael Hecht, 2003)

“The Negro Conservative: Christianity Still Enslaves the Minds of Those Whose Bodies It Has Long Held Bound,” a 1914 article on atheism, discussed the paradox that African-Americans were largely religious despite the American church's support for slavery and, later, institutionalized racism. According to Harrison, at the start of the Harlem Renaissance in the early 1920s, atheism, agnosticism and other forms of radicalism were becoming more common in black Harlem.

He died at age 44 in Bellevue Hospital in New York of complications from an appendectomy. (D. 1927)

“It should seem that Negroes, of all Americans, would be found in the Free-thought fold, since they have suffered more than any other class of Americans from the dubious blessings of Christianity.” 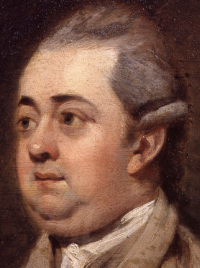 On this date in 1737, Edward Gibbon was born in England. The historian's most famous work is The Decline and Fall of the Roman Empire, which appeared originally in six volumes from 1776-88. Oxford-educated, Gibbon represented Lymington in Parliament for many years. He was a highly skeptical and unreligious Deist who was particularly critical of the Catholic Church.

In Volume V of The Decline and Fall, commenting on John XII, Gibbon wrote that the 10th century pope "lived in public adultery with the matrons of Rome; that the Lateran palace was turned into a school for prostitution, and that his rapes of virgins and widows had deterred the female pilgrims from visiting the tomb of St. Peter, lest, in the devout act, they should be violated by his successor. The Protestants have dwelt with malicious pleasure on these characters of Antichrist; but to a philosophic eye, the vices of the clergy are far less dangerous than their virtues."

The "melancholy duty" of the historian, Gibbon wrote, was to discover "the inevitable mixture of error and corruption" of religion.

Volume I of The Decline and Fall contains Gibbon's explication of early Christianity. He observed, "it was not in this world that the primitive Christians were desirous of making themselves either agreeable or useful." Gibbon took a pessimistic view over awakening the masses to the falsity of religion, writing in the same book: “A state of scepticism and suspense may amuse a few inquisitive minds. But the practice of superstition is so congenial to the multitude that, if they are forcibly awakened, they still regret the loss of their pleasing vision.”

Gibbon believed that Christianity introduced a new and negative element into religion in damning those who would not accept its teachings. "These rigid sentiments, which had been unknown to the ancient world, appear to have infused a spirit of bitterness into a system of love and harmony. The ties of blood and friendship were frequently torn asunder by the difference of religious faith; and the Christians, who, in this world, found themselves oppressed by the power of the Pagans, were sometimes seduced by resentment and spiritual pride to delight in the prospect of their future triumph."

Gibbon wrote several other major histories. He died of peritonitis at age 56. (D. 1794)

"The various modes of worship, which prevailed in the Roman world, were all considered by the people, as equally true; by the philosopher, as equally false; and by the magistrate, as equally useful."