There are 3 entries for this date: Ted Williams , Mary Godwin Shelley and Warren Buffett 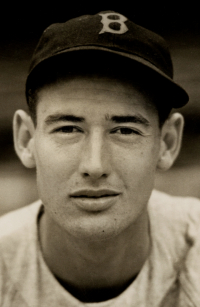 On this date in 1918, baseball's Hitter of the 20th Century, Ted Williams, was born in San Diego. The street evangelism of his mother, who worked for the Salvation Army and was known as "Salvation May," embarrassed him as he was growing up. He was dubbed "The Kid" when he started with the Red Sox as a 20-year-old rookie in 1939. His record-breaking career was interrupted twice by service in World War II and the Korean War, during which he safely crash-landed a burning plane in 1953. He was a decorated fighter pilot who received the Medal of Freedom in 1991.

"The Splendid Splinter" won the American League's Most Valuable Player Award in 1946 and 1949. Williams' career accomplishments include a .406 season in 1941, two Triple Crowns, two MVPs, six American League batting championships, 521 home runs, a lifetime average of .344 and 17 All-Star Game selections. Williams ended his career at age 42 by hitting a home run at Fenway Park. Williams had the record for career on-base percentage (.483). He was the last major league baseball player to hit .400.

After enduring a series of strokes, congestive heart failure and a nine-hour heart surgery in 2001, Williams died the next year at age 83. After the laudatory sports tributes came news stories in which two of his children disclosed Williams' nonreligious views, also revealing that their father had signed a pact with them to be frozen after death and kept in "biostasis." Williams' children told Reuters on July 25, 2002: “Our father was not a religious man. The faith that many people place in God, we place in science and other human endeavors."

"Johnny Pesky, his best friend on the Red Sox, said Williams was an atheist. Nobody has disputed that assessment, and the lack of a funeral or any other religious commemoration for the Splendid Splinter would seem to confirm it." 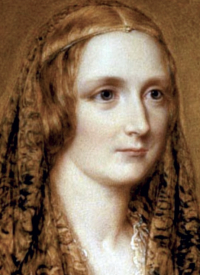 On this date in 1797, Mary Godwin (later Shelley) was born in London to Mary Wollstonecraft and William Godwin. Her mother, the famed champion of reason and author of the seminal feminist treatise A Vindication of the Rights of Women, died 10 days after her birth. Her father, a well-known atheist and radical, had attracted the admiration of atheist and poet Percy Bysshe Shelley.

Shelley, also an admirer of Mary Wollstonecraft's writings, met Mary in 1814. At 16 she ran away with the romantic poet, who was unhappily married to another woman and was the father of two children. His first wife's suicide made it possible for the couple to marry in 1816. Their first two children died and their only surviving son, Percy, was born in 1819 upon their return to England. At age 19, while living in Switzerland, Mary wrote the classic horror story Frankenstein, published in 1818, in a contest between herself, Percy and Lord Byron to write a "ghost story."

The book was immediately successful and has inspired more than 50 film adaptations. After her husband tragically drowned in 1822 in Italy, Mary returned to England, where she courted respectability on behalf of their son. She worked as a professional writer, penning short stories, travel books, essays and several other novels, including The Last Man (1826) about the gradual demise of the human race during a plague.

She died at age 53 in 1851 from what her physician suspected was a brain tumor. 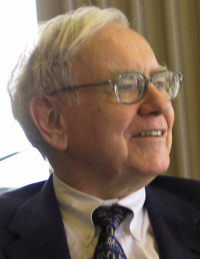 On this date in 1930, Warren Edward Buffett was born in Omaha, Neb., which is part of the reason he's called the "Oracle of Omaha." The other part is that he used savvy investment strategy to become a multibillionaire. His net worth in March 2011, according to Forbes magazine, was more than $50 billion, making him the world's third-richest person. Buffett's father, Harold, was a politician and businessman who had his own brokerage company.

Buffett was baptized as a Presbyterian, but religion didn't take with him, according to biographer Roger Lowenstein in Buffett: The Making of an American Capitalist (Doubleday, 1995): "Warren's exploits were always based on numbers, which he trusted above all else. In contrast, he did not subscribe to his family's religion. Even at a young age, he was too mathematical, and too logical, to make the leap of faith. He adopted his father's ethical underpinnings, but not his belief in an unseen divinity.” According to philosopedia.org, "Asked in 1997 if he was a supernaturalist or a naturalist, a believer or a nonbeliever, Buffett responded to Warren Allen Smith on a postcard, 'Agnostic.' "

Buffett attended the University of Pennsylvania's Wharton School of Business for two years and graduated at age 19 from the University of Nebraska–Lincoln with a B.S. in business administration. He then enrolled in the Columbia Business School in New York City and earned an M.S. in economics. In 1952, he married Susan Thompson. They had three children, Susie, Howard and Peter. (They lived separately from 1977 when she moved to San Francisco to pursue a singing career until her death in 2004. She introduced him to Astrid Menks, his longtime domestic partner whom he married in 2006.)

One of the reasons Buffett went to Columbia was because Benjamin Graham, author of The Intelligent Investor, one of his favorite books on securities markets, taught there. Buffett would make good use of Graham's principles of value investing to build his fortune and for a time worked for Graham. By 1962 he was a millionaire and started merging his partnerships and investing in Berkshire Hathaway, a textile manufacturing firm, buying shares for $7.60. He became a billionaire on paper in 1990, when Berkshire shares were $7,000. In July 2019, shares were worth $323,000 each. (That is not a typo.)

Though frugal in his personal life, Buffett has given away many millions, and in 2006 famously pledged to donate most of his wealth to five foundations, with 83 percent of it going to the Bill and Melinda Gates Foundation. Along with Bill Gates, he's the driving force behind The Giving Pledge, a campaign to get the rich to donate to charity. For many years, he's donated eBay auction proceeds from a lunch meeting. The 2010 winner, who stayed anonymous, paid $2.6 million to dine with Buffett.

Buffett speaking at the Kansas University School of Business in 2011; Mark Hirschey photo (cropped). CC BY 2.0

"Mr. Buffett's parents were observant Presbyterians and he, too, sang in the choir. Early on, though, he became an agnostic. He avoids houses of worship. His concerns are entirely secular. 'The nice thing about an agnostic is you don't think anybody is wrong,' Mr. Buffett said."