There are 2 entries for this date: George Will and Thomas Huxley 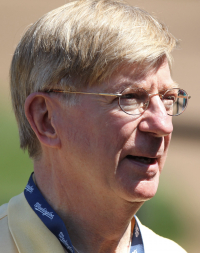 On this date in 1941, journalist and author George Frederick Will was born in Champaign, Ill. His father was a philosophy professor, specializing in epistemology, at the University of Illinois. Will has a bachelor's degree from Trinity College in Hartford, Conn. (1962), a master's in politics from Oxford University (1964) and a Ph.D. in politics from Princeton University (1968).

Will taught political philosophy at Michigan State University, the University of Toronto and then at Harvard. He served on the staff of U.S. Sen. Gordon Allott (R-Colo.) from 1970-1972. He edited National Review from 1972 to 1978. He's generally regarded as a libertarian-style conservative. In 1974 he started writing a twice-weekly column for the Washington Post and by 1976 was a contributing editor and columnist for Newsweek. He joined ABC as a news analyst in the early 1980s and has since been a contributor to Fox News, MSNBC and NBC.

Will won a Pulitzer Prize for Commentary in 1977. His Newsweek and newspaper columns have been published in five books and he has authored books on other subjects such as political philosophy and baseball. His book Men at Work: The Craft of Baseball (1989) was the top national best-seller for over two months. Will has three children from his first marriage with Madeline Marion (divorced 1991). He married Mari Maseng in 1991. They have a son together.

Will taught a freshman seminar titled "Varieties of American Conservatism" at Princeton during the 2018-19 academic year.

PHOTO: Will at a Nationals-Orioles baseball game in 2011; photo by Keith Allison under CC 2.0. 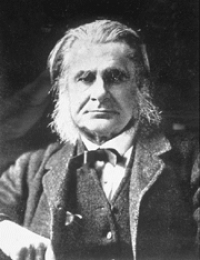 On this date in 1825, Thomas Henry Huxley was born in England. Huxley coined the term "agnostic" (although George Jacob Holyoake also claimed that honor). Huxley defined agnosticism as a method, "the essence of which lies in the rigorous application of a single principle ... the axiom that every man should be able to give a reason for the faith that is in him." Huxley elaborated: "In matters of the intellect, follow your reason as far as it will take you, without any other consideration. And negatively, in matters of the intellect do not pretend that conclusions are certain which are not demonstrated or demonstrable." (From his essay "Agnosticism.")

Huxley received his medical degree from Charing Cross School of Medicine, becoming a physiologist. He had spent his youth exploring science, especially zoology and anatomy, lecturing on natural history and writing for scientific publications. He was president of the Royal Society and was elected to the London School Board in 1870, where he championed a number of common-sense reforms.

Huxley earned the nickname "Darwin's Bulldog" when he debated Darwin's On the Origin of Species with Bishop Samuel Wilberforce in Oxford in 1860. When Wilberforce asked him which side of his family contained the ape, Huxley famously replied that he would prefer to descend from an ape than a human being who used his intellect "for the mere purpose of introducing ridicule into grave scientific discussion."

“Skepticism is the highest duty and blind faith the one unpardonable sin.”