There are 1 entries for this date: Charles Booth 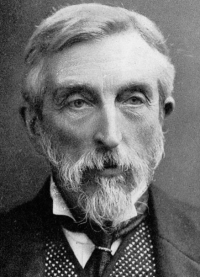 On this date in 1840, English entrepreneur, social researcher and philanthropist Charles Booth was born in Liverpool to Unitarians. Booth became a shipping company apprentice at age 16, and, after being orphaned in 1862, he and his brother Alfred started a skins and leather trade business, with offices in New York and Liverpool. Booth launched the Booth Steamship Company in 1866. He had campaigned in the slums of Toxteth in Liverpool for Liberal parliamentary candidacy in the 1865 election, which he lost, but witnessing the intense poverty of the slums changed the course of his life.

According to his personal writings and correspondence, this experience eventually caused him to abandon his religious faith. Instead of faith, Booth developed a strong sense of social responsibility and worked the rest of his life to improve conditions for the poor. Booth believed that party politics could not solve social problems, but, in his view, educating the electorate would. This idea motivated him to join Joseph Chamberlain's Birmingham Education League and participate in a survey, which concluded that 25,000 Liverpool children were not in school or working.

In 1871, Booth married Mary Macaulay, cousin of Beatrice Potter (later Webb). The Booths moved to London, and socialized with others (including the Webbs) who shared their deep concern for England's poor. Booth, a member of the Fabian Society, had also served on the Royal Commission on the Aged Poor, and served with Beatrice Webb on the Royal Commission on the Poor Law. Booth first began analyzing census figures by assisting the Lord Mayor of London's Relief Fund, in 1884.

Unsatisfied with other surveys of London's poverty, in 1886, Booth began work on his monumental work, Life and Labour of the People in London, which eventually totaled 17 volumes. Beatrice Webb, Mary Booth and other social reformers worked on this project at various times. While previous studies estimated that 25 percent of Londoners were in poverty, Booth's study showed the number to be at about 35 percent. It is believed that his studies on the poor helped result, at least in part, in the Old Age Pensions Act of 1908.

By the time of his death by stroke at age 76, Booth had been made a fellow of the Royal Society and received honorary degrees from Oxford, Cambridge and Liverpool Universities. (D. 1916)

"Comparatively few go to church, but they strike me as very earnest-minded, and not without a religious feeling even when they say, as I have heard a man say (thinking of the evils which surrounded him), 'If there is a God, he must be a bad one.' "

—Charles Booth, "Life and Labour of the People in London: East, Central and South London" (1904)