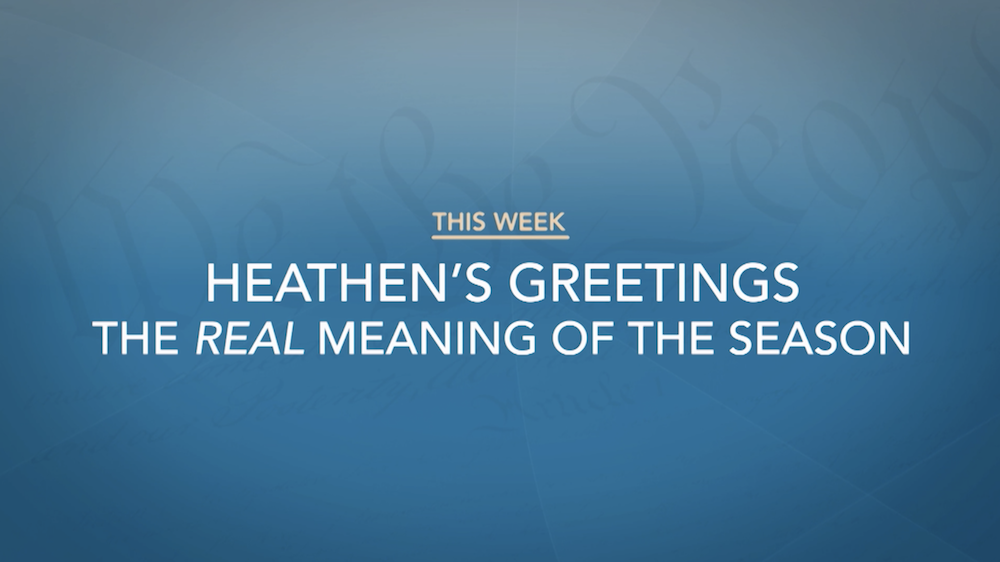 The Freedom From Religion Foundation is celebrating Winter Solstice — the real reason for the season — on its “Freethought Matters” television show this Sunday, and we’d like you to be a part of it.

Co-hosts Dan Barker and Annie Laurie Gaylor guide us on a warm personal and historical tour of the Solstice, which heralds the symbolic rebirth of the sun and the natural New Year. FFRF Senior Counsel Patrick Elliott goes on the road to explain constitutional versus unconstitutional Christmas displays. And we get a musical treat, with Barker and guest vocalist Susan Hofer performing freethinking tunes.

The show launched its fall season in early September with clips from the best past interviews on the program. Subsequently, it featured an interview with famed evolutionary biologist Richard Dawkins. The program has focused on a landmark Supreme Court case against religious indoctrination in public schools, has offered answers on how nonreligious people should deal with death, has spotlighted the secular lobby in Washington, D.C,  has argued for the expansion of the U.S. Supreme Court, has chronicled how Ireland is breaking free from Catholicism’s shackles and has shed light on the crucial but little-discussed subject of religious child abuse. A few weeks ago, the interview was with FFRF Honorary Director Katha Pollitt, the noted writer, freethinker and feminist. After that, the show interviewed distinguished evolutionary psychologist and renowned author Harvard Professor Steven Pinker. Recently, the show paid homage to the departed acting legend Ed “Lou Grant” Asner. And the only openly nonbelieving member of Congress, Rep. Jared Huffman, has honored the show with a return visit.