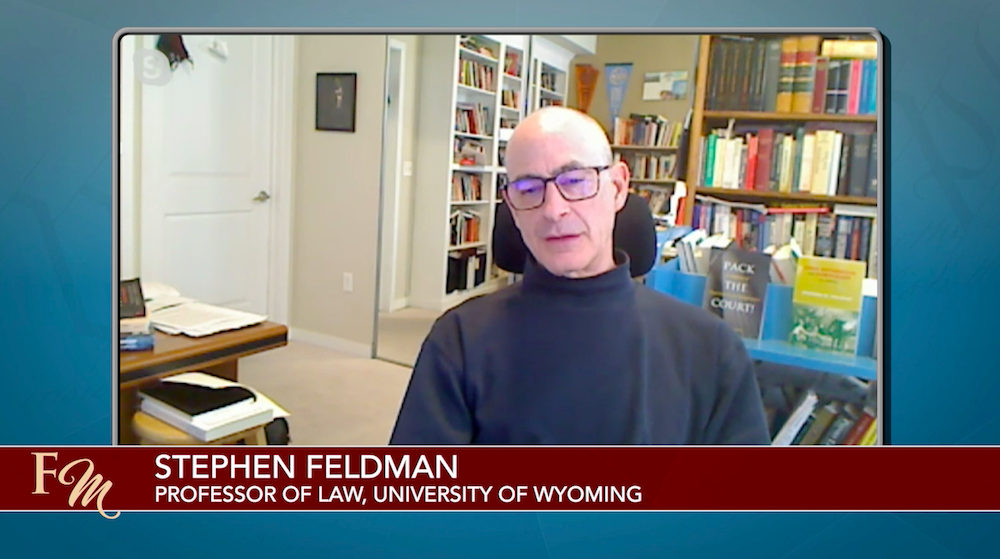 The guest this Sunday on the Freedom From Religion Foundation’s TV show, “Freethought Matters,” is full-throatedly insisting that the U.S. Supreme Court must be expanded.

Stephen M. Feldman is a professor of law and adjunct professor of political science at the University of Wyoming. His books include The New Roberts Court, Donald Trump and Our Failing Constitution, Free Expressions and Democracy in America: A History and Please Don’t Wish Me a Merry Christmas: A Critical History of the Separation of Church and State. Professor Feldman’s newest work is Pack The Court! A Defense of Supreme Court Expansion, in which he persuasively argues that the current Supreme Court is a serious threat to equality, fairness and the rights of women, LGBTQ and non-Christians and that the court denigrates democratic government while shielding wealth.

“The Supreme Court is politically insulated because justices are appointed for life and their salaries cannot be diminished,” Feldman summarizes the thesis of his book for “Freethought Matters” co-hosts Dan Barker and Annie Laurie Gaylor. “But to offset that political insulation, the Constitution does give Congress and the president the power to change the size of the court, and it has happened repeatedly throughout American history.”

Upcoming guests on the show include Atheist Ireland founder Michael Nugent and joint guests Breaking Their Will author Janet Heimlich and nonreligious hospital chaplain Terri Daniel talking about the religious maltreatment of children.

The show launched its fall season in early September with clips from the best past interviews on the program. Subsequently, it featured an interview with famed evolutionary biologist Richard Dawkins. The program has focused on a landmark Supreme Court case against religious indoctrination in public schools, has offered answers on how nonreligious people should deal with death and has spotlighted the secular lobby in Washington, D.C. A few weeks ago, the interview was with FFRF Honorary Director Katha Pollitt, the noted writer, freethinker and feminist. After that, the show interviewed distinguished evolutionary psychologist and renowned author Harvard Professor Steven Pinker. Recently, the show paid homage to the departed acting legend Ed “Lou Grant” Asner. And the only openly nonbelieving member of Congress, Rep. Jared Huffman, honored the show with a return visit last Sunday.