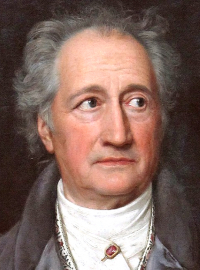 On this date in 1749, Germany's most famous poet, Johann Wolfgang von Goethe, was born in Frankfurt am Main, to a comfortable bourgeois family. He began studying law at Leipzig University at the age of 16 and practiced law briefly before devoting most of his life to writing poetry, plays and novels. In 1773, Goethe wrote the powerful poem "Prometheus," which urged human beings to believe in themselves more than in gods.

His first novel was The Sorrows of Young Werther (1774), a semi-autobiographical tragedy about a doomed love affair. A line from that novel: "We are so constituted that we believe the most incredible things: and, once they are engraved upon the memory, woe to him who would endeavor to erase them." In his 1797 Hermann and Dorothea, Goethe observed: "The happy do not believe in miracles." Goethe typified the Sturm und Drang romantic movement, celebrating the individual. The Grand Duke of Weimar appointed him an administrator in 1775, where, according to some historians, Goethe turned Weimar into "the Athens of Germany."

Goethe was keenly interested in the natural sciences and in his studies discovered the human intermaxillary bone (also known as the Goethe bone, adjacent to the incisors). After a sojourn in Italy from 1786 to 1788 he returned to his art, starting a journal inspired by Christopher Marlowe's play "Faust," Goethe wrote part 1 of his most famous play, published in 1808. Part 2 was published in 1832. From Part 1, Scene 9: "The church alone beyond all question / Has for ill-gotten gains the right digestion."

Goethe's religious beliefs were complicated and changed at various periods in his long life. He was raised Lutheran and was quite devout when young but grew to have problems with Christianity's dogma, hierarchy and superstitious aspects. He revered Spinoza, whom Nietzsche often paired with Goethe. His later spiritual perspective incorporated pantheism (heavily influenced by Spinoza), humanism and elements of Western esotericism, as seen most vividly in part 2 of "Faust."

"Goethe was a freethinker who believed that one could be inwardly Christian without following any of the Christian churches, many of whose central teachings he firmly opposed, sharply distinguishing between Christ and the tenets of Christian theology, and criticizing its history as a 'mishmash of fallacy and violence,' " states the 1982 German publication Goethe's Poems in Chronological Order. D. 1832.

In the wilderness a holy man
To his surprise met a servant of Pan,
A goat-footed faun, who spoke with grace;
"Lord, pray for me and for my race,
That we in heaven find a place:
We thirst for God's eternal bliss."
The holy man made answer to this:
"How can I grant thy bold petition,
For thou canst hardly gain admission
In heaven yonder where angels salute:
For lo! thou hast a cloven foot."
Undaunted the wild man made the plea
"Why should my hoof offensive be?
I've seen great numbers that went straight
With asses' heads through heaven's gate."

—Goethe poking fun at pietists claiming his cloven-hoofed paganism would bar him from heaven. "Goethe: With Special Consideration of His Philosophy" by Paul Carus (1915) 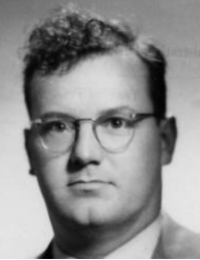 On this date in 1916, Charles Wright Mills was born in Waco, Texas. Mills grew up without friends, books or music and, at the behest of his insurance broker father, initially planned for a career in engineering. Enrolled at Texas Agricultural and Mechanical College in the mid-1930s, Mills frequently wrote for the student newspaper, often about his anger at upperclassmen taunting freshman.

These were less the words of an engineer and more the early musings of one of the 20th century's great sociologists. After one year at Texas A & M, Mills transferred to the University of Texas-Austin, where he excelled in philosophy, sociology, cultural anthropology, economics and social psychology. At UT-Austin, Mills received a bachelor's in sociology and a master's in philosophy, while developing interest in the theories and writings of Karl Marx, Thorstein Veblen and John Dewey.

Mills involved himself in public affairs in Washington, D.C., and began writing for progressive magazines like The New Republic. In 1945 he joined Columbia University's Bureau of Applied Social Research, where he attempted to combine his progressive political passions with empirical research. Mills wrote some of the most radical books of the 20th century, including New Men of Power (1948), White Collar (1951) and The Power Elite (1956), all published when the FBI and the attorney general were compiling lists of "subversives," which put Mills in great personal and professional danger. Interested in the Cuban revolution under Fidel Castro, he visited Cuba in 1960.

Mills, who refused to identify with any political party, movement or religion, adamantly criticized what he called "cheerful robots," or those who happily follow without questioning authority. He said, "If there is one safe prediction about religion in this society, it would seem to be that if tomorrow official spokesmen were to proclaim XYZism, next week 90 percent of religious declaration would be XYZist." ("A Pagan Sermon to the Christian Clergy," 1958.)

The Sociological Imagination (1959), Mills' most lasting legacy, helped found the subfields of public and critical sociology. It called on sociologists to communicate with the general public instead of just one another and to connect people to public issues. At age 45 he suffered a fatal heart attack. D. 1962.

“[A]re not all the television Christians in reality armchair atheists? In value and in reality they live without the God they profess; despite ten million Bibles sold each year, they are religiously illiterate.”

“According to your belief [Christian clergy], my kind of man — secular, prideful, agnostic and all the rest of it — is among the damned. I'm on my own. You've got your God.”

—Mills, "A Pagan Sermon to the Christian Clergy," remarks to the Board of Evangelical and Social Service, United Church of Canada (Feb. 27, 1958) 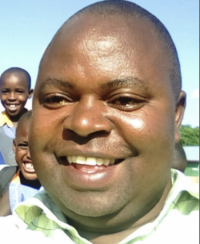 On this date in 1979, humanist activist and educator Bwambale Robert Musubaho was born in Kasese, Uganda. Orphaned at age 5 and baptized and confirmed in the Anglican Church, he was raised by his grandmother and worked during high school as a barber before receiving a scholarship to attend Kyambogo University in Kampala. He graduated in 1998 with a biology degree.

In a 2017 interview with Phil Zuckerman, Bwambale said he lost his religious faith in the early 2000s when he "started being skeptical about the natural world and things in it," eventually embracing humanism. He's the author of the book Orphans of Rwenzori: A Humanist Perspective.

In 2011 he founded the Kasese Humanist School for boys and girls ages 3-14. It welcomes children from all belief and nonbelief systems but is secular in nature and stresses reliance on the sciences and avoidance of "dogmas and indoctrinations which are prevalent in the majority of Ugandan communities. We embrace REASON and belief in things backed by empirical evidence, not myths, fairy tales and allegories." The school has three very modest campuses and about 700 students.

In 2015, working with the Brighter Brains Institute in the U.S., Bwambale started what was said to be the world's first atheist orphanage. BiZoHa Orphanage includes one of the humanist school's campuses and a small acreage on which food crops are grown. An affiliated humanist center offers educational DVDs, documentary films and books and woman empowerment initiatives in tailoring, gardening and craft making.

Bwambale is married and has a son and daughter. He speaks English, Swahili and Luganda.

"I think humanism is within us and it’s inborn, nobody under the sun is born with religion. I think religion is something that is imposed on humanity by people who have hidden agendas."