Emperor Has No Clothes Award 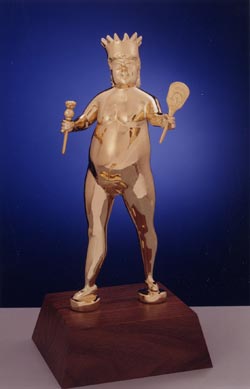 The award is based on the folk tale, "The Emperor Has No Clothes," by Hans Christian Andersen. In the story two weavers con a gullible emperor by selling him expensive cloth they claim is so exquisite only the very wise can see it. The emperor parades before his cowed subjects in his imaginary finery, until an astute child calls out:

"But the emperor has no clothes!"

Religion, the Foundation contends, has a similar imaginary base.

The award is reserved for public figures who take on the fabled role of the little child in the Hans Christian Andersen fairy tale and "tell it like it is"—about religion. The premiere award went to Nobel Laureate and plain-spoken physicist Steven Weinberg in 1999.

The Emperor statue, an engaging, golden figure clad only in shoes and a fig leaf, and carrying a mirror and sceptre, was produced for the Foundation by the same firm that does the Oscars.