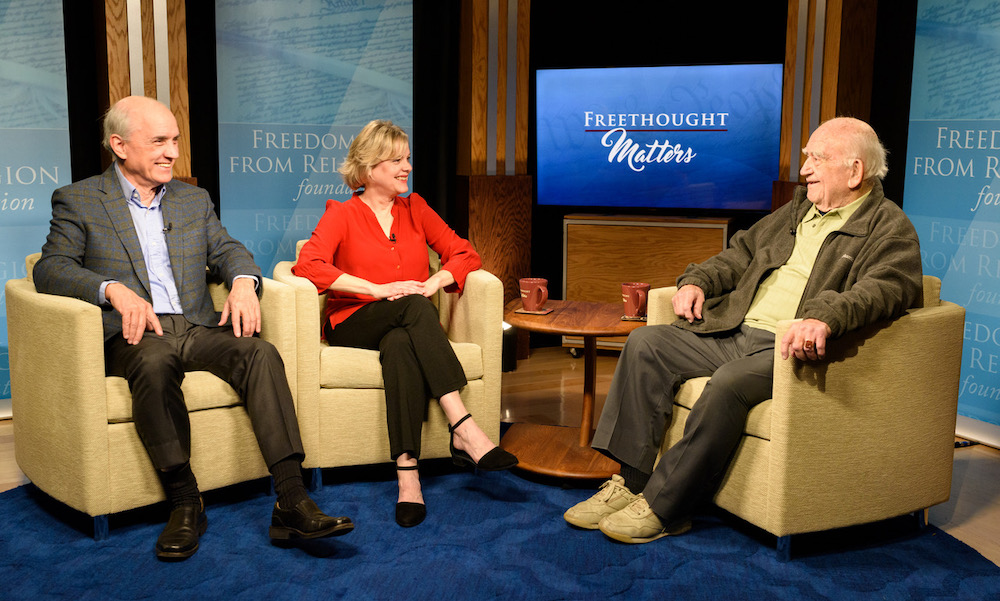 Asner has won more primetime Emmys than any other male actor. In addition to his iconic Lou Grant character, among his nearly 400 credits on TV and on the stage and in movies are the beloved lead part in the cartoon feature “Up,” Santa in the movie “Elf” and a recent guest spot in the Netflix series “Dead To Me.” Asner has also made a name for himself as a political activist. Asner was in Madison, Wis., to fundraise for The Progressive magazine and graciously agreed to come by Freethought Hall and sit down for a chat with FFRF Co-Presidents Dan Barker and Annie Laurie Gaylor.

“It’s all so blatantly plain: How people can follow a God and turn it into a false idol,” says Asner during the fun interview. Tune in to find out whether Asner preferred portraying God or Santa.

The first guest in the new season was U.S. Rep. Jared Huffman, founder of the Congressional Freethought Caucus. Huffman’s appearance on the show made media waves due to his remarks about his colleague Rep. Liz Cheney’s dogmatic stance on the religious oath. World-renowned philosopher Daniel Dennett and U.S. Reps. Jamie Raskin and Mark Pocan have recently appeared on the show.