Freethinker of the Year Award 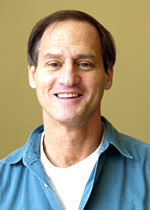 The Foundation’s inaugural awardee was attorney Ishmael Jaffree, who demonstrated great courage in challenging an Alabama law encouraging religious meditation in public schools with himself as plaintiff. The challenge brought his family great notoriety and harassment, but ended with a strong decision by the U.S. Supreme Court overturning the law.

Pictured: 2002 Freethinker of the Year Michael Newdow, M.D., who received the award after his nationally-significant victory in which the 9th U.S. Circuit Court of Appeals ruled the words “under God” unconstitutional in the Pledge of Allegiance.