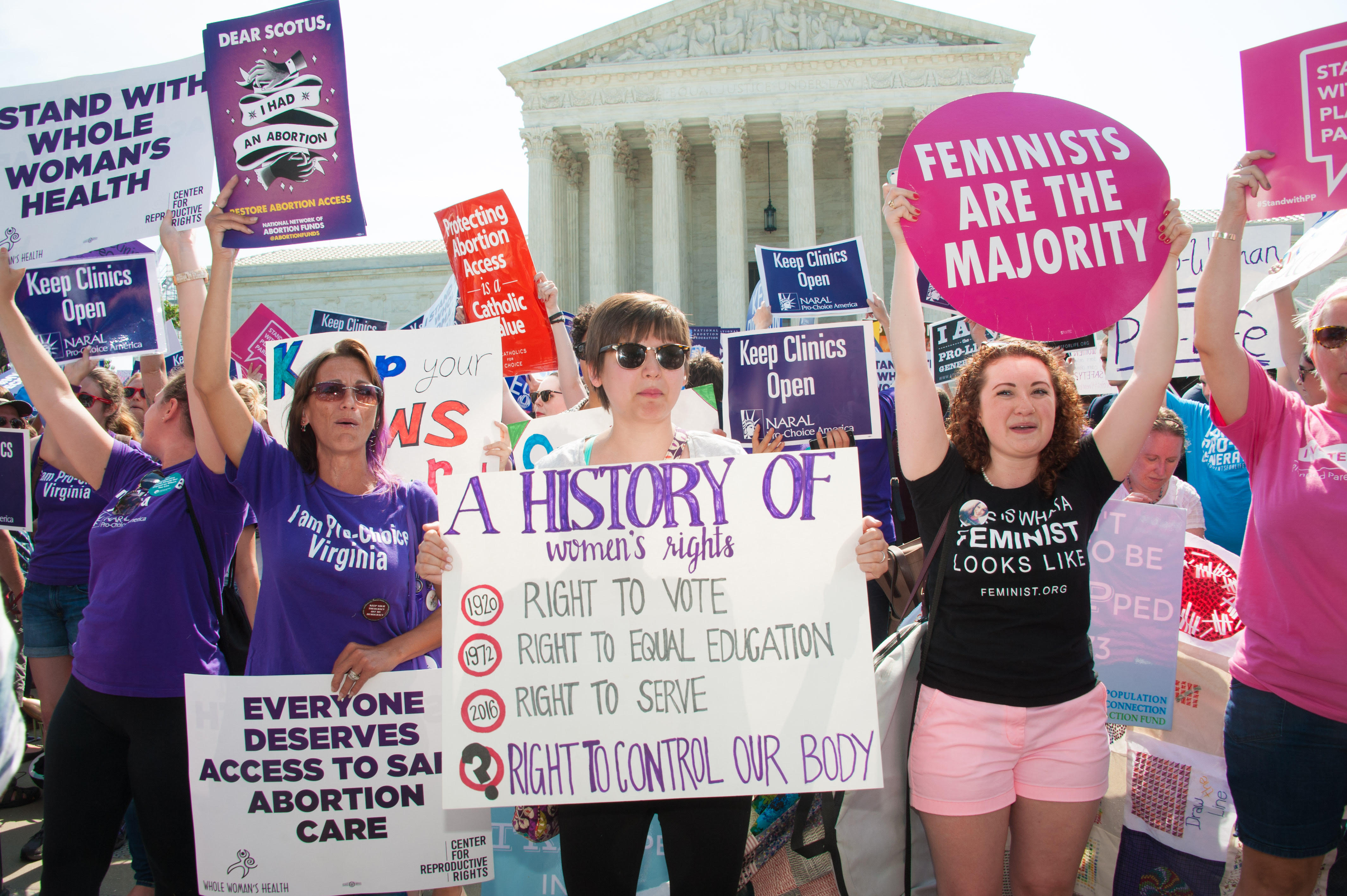 In light of the leaked draft of an expected Supreme Court decision that appears to overrule Roe v. Wade, and the widespread panic it has sparked, the Freedom From Religion Foundation urges five constructive acts of resistance.

The first: to demand that the U.S. Senate finally pass the Women’s Health Protection Act, which would codify and protect the rights in Roe v. Wade no matter what the high court does. The second: to vote and collectively to mobilize the secular vote. The third: to demonstrate in the streets (peacefully), via social media and otherwise make the biggest, loudest fuss so that the courts, candidates and public officials know we won’t tolerate this fundamental right being revoked. We cannot tolerate American women (and teenagers) being forced to undergo compulsory pregnancy in our supposedly free nation. The fourth: to support critically needed abortion funds, as FFRF itself does, such as the all-volunteer Wisconsin Women’s Medical Fund. Finally, we must demand court reform, as our extremist-captured Supreme Court has lost its legitimacy.

Justice Samuel Alito, according to the leaked opinion, claims abortion isn’t among the enumerated rights in the U.S. Constitution, therefore it’s not a right at all — it’s to be left to the whim of whatever legislature happens to run your state (and two-thirds of those legislators, by the way, are men voting on women’s rights). Alito argues paternalistically that the right to abortion must be returned to the “elected officials” at the state level. The idea of putting reproductive rights, or any civil right or individual liberty, up for a vote is anathema to America’s founding principles. A right as basic as deciding when or whether to continue a pregnancy and become a parent cannot and should not be dependent on your zipcode. Such reproductive tyranny is suitable for a totalitarian state — or a theocracy.

But we mustn’t take Alito at his word when he claims that the Constitution does not encompass reproductive liberty. Seven justices who voted for Roe v. Wade back in 1973 noted that the Constitution grants a right to privacy via the Due Process Clause of the 14th Amendment. Sadly, the authors of Roe v. Wade ignored the Establishment Clause and its protection of freedom of conscience — an unfortunate oversight. The only organized opposition to abortion rights is religious in nature. Clearly, individuals who believe their god imbues a conceptus with a soul should not, in a free and secular country, have the right to force their dogma or reproductive servitude upon other individuals who do not believe such an article of faith.

And speaking of faith, Alito is one of six justices on the nine-member high court who are Roman Catholic. Five of them typically vote in lockstep, with only Justice Sonia Sotomayor deviating. Apparently in this instance, Justice John Roberts, who typically votes with his four ultraconservative Catholic peers, seems to be striving for a more moderate pace to outlaw abortion rights. That still makes a 5–4 arch-Roman Catholic majority apparently signing onto the leaked brief to overrule Roe. Religion, as always, is at the heart of this attack against a fundamental right.

With precedent and the broad rights of our Constitution meaning nothing to the extremist Supreme Court majority, many other constitutional rights will be up for grabs, including the right to contraception, marriage equality and LGBTQ rights, the Civil Rights Act and, of course, what’s left of the eviscerated Voting Rights Act. Needless to say, the constitutional principle of separation between state and church, which Justice Brett Kavanaugh called a “mistaken understanding of the Establishment Clause” in yesterday’s decision on the Boston Christian flag, is also going to be found, along with abortion rights, not to be in the Constitution.

FFRF has been forthright in demanding court reform in light of Donald Trump’s takeover as president of the federal judiciary — he appointed a third of it, including the same proportion of the U.S. Supreme Court. FFRF has supported various congressional measures, such as the first bill calling for court reform, introduced by Rep. Mondaire Jones. We pointed out that the commission to investigate court reform that President Biden appointed released a meaningless, anodyne report. Where are other organizations and progressive members of Congress on this issue and why are they sitting on their hands? FFRF knew abortion rights could not survive the Trump-captured high court, and now we have the proof.

At least one extremist occupies a stolen seat on the high court, thanks to then-Senate Majority Leader Mitch McConnell’s refusal to hold a hearing for President Obama’s nominee. The man who sits on that stolen seat, Neil Gorsuch, has joined Alito’s 5–4 majority opinion in the leaked decision. That stolen seat is stealing reproductive rights in front of our eyes.

Even this catastrophic decision, presuming the leak is as legitimate as it appears, is not the end of it. Abortion rights will continue to be battled at the local level, with more and more draconian bans being implemented in many states. Current Senate Minority Leader Mitch McConnell is quashing the Women’s Health Protection Act, with sponsor Sen. Tammy Baldwin noting that the answer is to eliminate the filibuster. Meanwhile, anti-abortionists are already gleefully drafting a national law to outlaw almost all abortion care. While state bans being enacted right now exempt women from prosecution, we know that prosecution of abortion patients is next. We need only look at the pre-Roe days, when women could be arrested and imprisoned for undergoing abortions. Women bled to death or died of sepsis, fearing being turned in if they sought medical care. Cases of fetal abnormalities, rape, incest and maternal illness will not be met with compassion. Even women who tragically endure stillbirths will not be safe from these cruel and punitive laws, as we already see occurring under the current anti-abortion hysteria.

The clock is being turned back in front of our eyes to the bad old days. And it isn’t just reproductive rights at stake. It’s no coincidence that the second wave of feminism corresponded with Supreme Court decisions legalizing contraception and abortion care. If you cannot control and determine if and when you become a parent, you cannot control any other major aspect of your life, including education and work. As always, women with means and knowledge will be able to end unwanted pregnancies, although criminal laws will still create fear, shame and unnecessary hardship and travel. The young, low-income, those without connections or health care, especially in rural areas and, disproportionately, women of color, will suffer the most.

Our nation will suffer from a massive judicial betrayal if Roe is indeed overturned. As Sotomayor asked in decrying the court’s refusal to overturn the Texas abortion ban (SB 8): “Will this institution survive the stench that this creates in the public perception that the Constitution and its reading are just political acts? I don’t see how it is possible.”

FFRF Co-President Annie Laurie Gaylor urges, “We who care about the welfare of women, families, our country and liberty — and the integrity of the judicial branch — must vote, organize, lobby and persevere by resisting as publicly as we can. Our country is being pummeled because religion is calling the shots, instead of reason, science and our secular Constitution.”