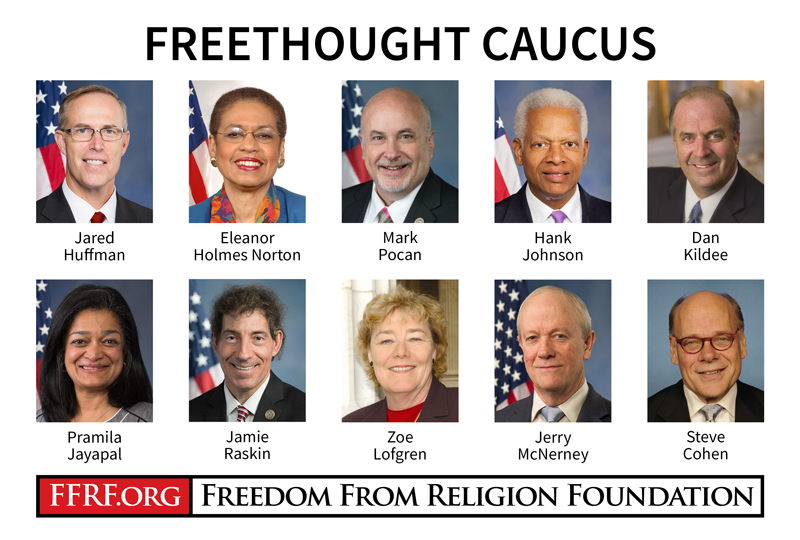 A uniquely freethinking caucus in Congress created a short while ago is growing by leaps and bounds.

In April, Rep. Jared Huffman, D-Calif., the only openly nontheistic member of Congress, announced the formation of the Congressional Freethought Caucus to focus on promoting secular values and give a voice to freethinking voters. Other founding members of the Congressional Freethought Caucus include Reps. Dan Kildee, D-Mich., Jerry McNerney, D-Calif., Mark Pocan, D-Wis., and Jamie Raskin, D-Md.

The mission statement of the Congressional Freethought Caucus is “to promote public policy formed on the basis of reason, science, and moral values; to protect the secular character of our government by adhering to the strict constitutional principle of the separation of church and state;  to oppose discrimination against atheists, agnostics, humanists, seekers, religious and nonreligious persons, and to champion the value of freedom of thought and conscience worldwide; and to provide a forum for members of Congress to discuss their moral frameworks, ethical values, and personal religious journeys.”

Nonreligious Americans — the so-called “Nones” — make up about one-quarter of the country but are massively underrepresented in legislative chambers. FFRF lauds members of the Freethought Caucus for not being afraid of standing up for their values.

The group has already proven its worthiness. In early September, members of the Congressional Freethought Caucus, along with other House Democrats, penned a statement to the Senate Judiciary Committee warning against Judge Brett Kavanaugh’s confirmation to the U.S. Supreme Court.

The letter outlined six main areas of concerns the group recognized as disqualifying factors for Kavanaugh to serve a lifetime appointment on the nation’s highest court. Chief among these was Kavanaugh referring to the “wall of separation” between church and state as a metaphor “wrong as a matter of law and history.” Additionally, the letter called attention to Kavanaugh’s history of hypersensitivity to burdens on religion. And the letter noted the threat Kavanaugh posed to 70 years of Establishment Clause jurisprudence, the danger he poses to our secular public schools, and his history of hostility towards secular Americans and state-church plaintiffs.

“The Congressional Freethought Caucus is fast proving to be the most invaluable caucus in Congress,” says FFRF Co-President Dan Barker. “With its membership quickly increasing, it’ll become an even more effective group advocating for freethinkers and secular folks around the country.”

The Freedom From Religion Foundation is a national nonprofit organization with more than 32,000 members across the country. FFRF’s purposes are to protect the constitutional principle of separation between church and state, and to educate the public on matters relating to nontheism.