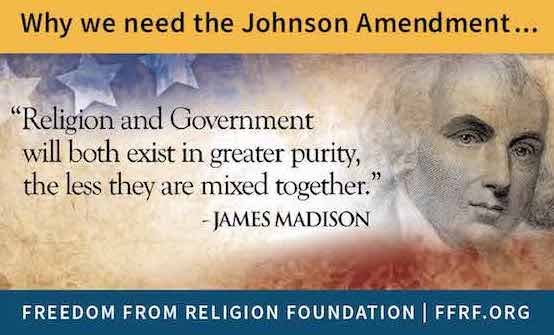 President Trump has failed to fulfil his misguided promise to “get rid of and totally destroy the Johnson Amendment,” according to documents filed in court by his own lawyers.

The Department of Justice filed two motions in response to the Freedom From Religion Foundation’s lawsuit challenging Trump’s executive order on religious freedom that torpedo the president’s claims. As The Washington Post, Politico, and others reported, Trump’s attorneys admitted that, despite Trump’s assertion that churches could ignore the Johnson Amendment, “The order does not exempt religious organization from the restrictions on political campaign activity applicable to all tax-exempt organizations.”

FFRF sued Trump and the IRS on May 4, the day he signed the high-profile order announced from the Rose Garden with nuns and other religious figures looking on. FFRF pointed out the disconnect between the impotent language in the order regarding the Johnson Amendment and Trump’s inflated claims about the order’s effect. Trump repeatedly boasted that he was getting rid of the Johnson Amendment and that doing so would be his “greatest contribution to Christianity.”

Trump claimed continually that his executive order invalidated the Johnson Amendment as it applies to church politicking. As FFRF’s amended complaint filed on Sept. 19 documented, one such instance occurred on June 8, when Trump told the evangelicals in the crowd at the Faith and Freedom Coalition:

"That executive order also followed on one of my campaign promises to so many of you, to stop the Johnson Amendment from interfering with your First Amendment Rights. … So, I just want to congratulate everybody in this room, because that was a big deal and it was a very important thing for me to do for you."

But according to his own lawyers, the order was a whole lot of nothing. FFRF Co-President Dan Barker points out that “essentially, the Department of Justice called the president a liar and explained to the court that everything the president has said about the Johnson Amendment is nonsense. His religious freedom order as it related to that safeguard against politicking by 501(c)(3) nonprofits was all pomp and no substance—an admission we now have in multiple court filings.”

The filings by Trump’s DOJ attorneys prove that Trump’s executive order did not deliver on his destructive campaign promise designed to reward white evangelicals, 81 percent of whom voted for Trump. This voting bloc disproportionately approves of ending the Johnson Amendment.

“By filing an amended complaint we were able to get into the record Trump’s continuing and misleading braggadocio over the effect of the order,” says FFRF Co-President Annie Laurie Gaylor. “We did not accept that the government was saying one thing, while Trump was saying another. We’re pleased we got the DOJ to reiterate its position twice in a court of law.” The DOJ argued in its filings that FFRF “misunderstood the executive order,” but, notes Gaylor, “clearly it is Trump who misunderstands both the order and the extent of his power.”

The admission is significant since it means that if churches politick from the pulpit they cannot claim that Trump’s order allows them to do so. FFRF filed a complaint with the IRS last week against the Alabama church that endorsed congressional candidate Roy Moore, who is accused of sexual assault.

The Becket Fund, which has brought a host of bad suits in an attempt to redefine religious liberty to allow discrimination, was miffed at the government’s response to FFRF’s lawsuit. David Lane, a Christian nationalist who runs the American Renewal Project, “said the court filing shows the limitations of Trump’s executive order. ‘In the long run it doesn’t do anything for us,’” according to The Hill.

From the beginning, FFRF predicted that the lawsuit might end once the government admitted the president cannot overturn an act of Congress by fiat: “If Trump’s lawyers want to march into that courtroom and tell the world and President Trump that this order doesn’t do anything, we would consider that a win,” FFRF’s Director of Strategic Response Andrew Seidel, an attorney who worked on the complaint, explained to the Daily Beast shortly after the suit was filed.

There is substantial value in being able to point to DOJ court filings to expose Trump’s lies, says  Gaylor. “FFRF will pocket this victory and remain vigilant as watchers on the wall . . . between state and church.”

The Danger is not over

FFRF’s voluntary dismissal allows the group to refile a challenge to the Trump administration’s nonenforcement of the Johnson Amendment at any time. And the danger is far from over. Currently, there is a budget item that would defund the IRS’s ability to enforce the church politicking rule. FFRF is also working to protect the Johnson Amendment in the tax bill conference committee, mobilizing members to ensure that Section 5201 of HR 1 does not make it into the final bill.