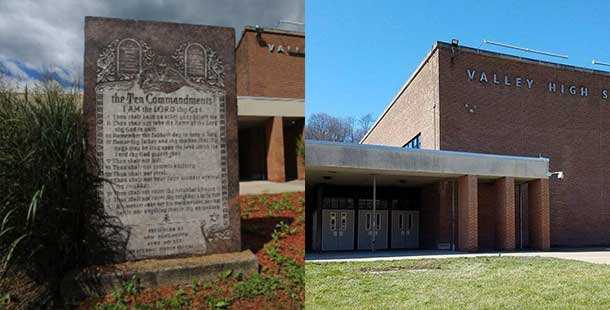 A 6-foot Ten Commandments monument has finally been hauled away from a Pennsylvania public high school due to a Freedom From Religion Foundation lawsuit.

"The Ten Commandments monument no longer is in front of Valley Jr.-Sr. High School in New Kensington," reports the Pittsburgh Tribune-Review. "The monument apparently was removed sometime Tuesday (March 21) afternoon."

FFRF and the New Kensington-Arnold School District signed a formal agreement last month to take out the biblical marker but the district had been dragging its feet. Finally, it has fulfilled its obligation.

The Freedom From Religion Foundation can be said to be "in seventh heaven."

"We've been waiting for five years for reason and the Constitution to prevail, and are pleased that students going to Valley Jr.-Sr. High School will no longer be confronted with biblical edicts," says FFRF Co-President Annie Laurie Gaylor.

FFRF, a national state/church watchdog, along with a student and parent, Marie Schaub, filed the suit in 2012 to get the monument removed. Schaub, an atheist, ultimately withdrew her daughter from the Valley Jr.-Sr. High School because of the marker.

U.S. District Judge Terrence McVerry in July 2015 ruled that Schaub and her child did not have frequent enough contact with the decalog monolith, which meant that they did not have standing to sue over the violation.

But in August 2016, the 3rd U.S. Circuit Court of Appeals upheld Schaub's legal right to challenge the bible monument. The three- judge panel unanimously found that Schaub's removal of her daughter from the school due to the presence of the monument, and prior contact with it, established clear injury to sue.

The district's insurer will pay attorneys' fees of $163,500, of which more than $40,000 will go to FFRF for its attorney fees as well as reimbursement for its costs.

FFRF warmly thanks its two plaintiffs, including the only named plaintiff, Marie Schaub, for demonstrating great commitment and courage despite a hostile community backlash and social media campaign.

"Our plaintiffs demonstrated true patriotism by standing up for the First Amendment," Gaylor adds. Schaub will receive a Freethinker of the Year award at FFRF's 40th annual convention in Madison, Wis., the weekend of Sept. 15-17.

The Freedom From Religion Foundation has 27,000 nonreligious members nationwide and chapters all over the country, including 800-plus and two chapters in Pennsylvania.