Pa. school commandments marker to be removed due to FFRF lawsuit 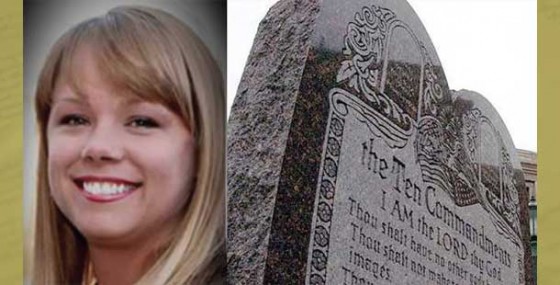 The Freedom From Religion Foundation is delighted to announce the successful settlement of a longstanding federal lawsuit challenging a 6-foot Ten Commandments monument in front of a Pennsylvania public high school.

FFRF, a national state/church watchdog, along with a student and parent, Marie Schaub, filed suit in September 2012. Schaub, an atheist, ultimately withdrew her daughter from Valley High School in the New Kensington-Arnold School District because of the monument.

U.S. District Judge Terrence McVerry dismissed the New Kensington challenge in July 2015, ruling that Schaub and her child did not have frequent enough contact with the decalog monolith, which meant that they did not have standing to sue over the violation.

In August 2016, the 3rd U.S. Circuit Court of Appeals upheld Schaub's legal right to challenge the bible monument. The three- judge panel unanimously found that Schaub's removal of her daughter from the school due to the presence of the monument, and prior contact with it, established their clear injury to sue.

That ruling set in motion negotiations with the school district, which has now agreed to remove the Ten Commandments monument within 30 days. The district's insurer will pay attorneys' fees of $163,500, of which more than $40,000 will go to FFRF for its attorney fees as well as reimbursement for its costs.

"It's been a drawn-out fight but my family and I are grateful to everyone who has helped us finally right a wrong that was committed so long ago," says Schaub, who received FFRF's Atheist in a Foxhole Courage Award at its annual convention last fall in Pittsburgh. "I hope this settlement serves as a lesson and a reminder that the separation of state and church is especially important when in comes to our kids in public schools. The removal of this religious monument will provide a more welcoming environment that will promote equality and neutrality."

FFRF is gratified that reason and our secular Constitution have prevailed.

In August 2015, McVerry had ruled in favor of FFRF's challenge of a similar marker in front of the a junior high school in Connellsville, Pa. That bible monument was removed in October 2015.

FFRF has 27,000 nonreligious members nationwide and chapters all over the country, including 800-plus and two chapters in Pennsylvania.