There are 2 entries for this date: Sir Ian McKellen and Ralph Waldo Emerson 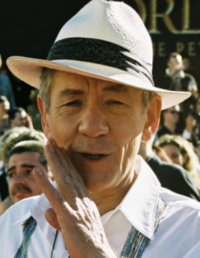 On this date in 1939, Ian Murray McKellen was born in Burnley, Lancashire, England. At 18, McKellen won a scholarship to Cambridge, where he read English and participated in student drama. He graduated in 1961 and began working as an actor. Most of McKellen's early acting career took place on the stage, both in the UK and on Broadway, but he also worked in film and television in the UK.

In 1980 McKellen received the Tony Award for Best Actor for his stage role as Salieri in "Amadeus." In the 1990s he started to work in Hollywood films.

McKellen has been nominated for two Oscars, once for Best Actor in 1999 for his role as film director James Whale in "Gods and Monsters," and once for Best Supporting Actor in 2002 for the role of the wizard Gandalf in "The Fellowship of the Ring," a role for which he won the Screen Actor's Guild Award. McKellen played Gandalf in all three "Lord of the Rings" movies and reprised the role in the "The Hobbit: An Unexpected Journey" (2012).

He has also played the comic-book villain Magneto in the movies "X-Men" (2000), "X2" (2003), and "X-Men: The Last Stand" (2006). McKellen's classical acting career includes playing many Shakespearean leads, both for stage and screen. In 1995 he famously played the lead in the film "Richard III," set in an alternate fascist England, and in 2007, he played King Lear in a stage production that toured the world and was shown on American TV.

McKellen is open about his personal atheism but does not often speak on the subject. He came out as a gay man publicly in 1988 and became a founding member of the UK LGBT advocacy group Stonewall to advocate against discriminatory legislation. McKellen was made a Commander of the Order of the British Empire in 1979 and was knighted in 1991 for his contributions to theater. In 2008 he was made a Companion of Honor for his services to drama and equality.

McKellen at "The Return of the King" premiere in 2003; Stefan Servos photo under CC 3.0.

Matt Lauer: There have been calls from some religious groups. They wanted a disclaimer at the beginning of this movie saying it is fiction because, again, one of the themes in the book really knocks Christianity right on its ear. ... How would you all have felt if there was a disclaimer at the beginning of the movie?
Ian McKellen: Well, I've often thought the bible should have a disclaimer in the front saying this is fiction. I mean, walking on water, it takes an act of faith. And I have faith in this movie. Not that it's true, not that it's factual, but that it's a jolly good story. And I think audiences are clever enough and bright enough to separate out fact and fiction, and discuss the thing after they've seen it. 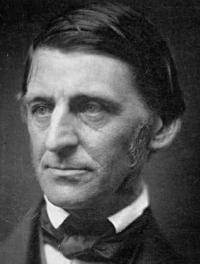 On this date in 1803, Ralph Waldo Emerson was born in Boston. Educated at Harvard and the Cambridge Divinity School, he became a Unitarian minister in 1826 at the Second Church Unitarian. The congregation, with Christian overtones, issued communion, something Emerson refused to do. "Really, it is beyond my comprehension," Emerson once said, when asked by a seminary professor whether he believed in God. (Quoted in 2000 Years of Freethought, ed. James A. Haught)

By 1832, after the untimely death of his first wife, Emerson cut loose from Unitarianism. During a year-long trip to Europe, he became acquainted with such intelligentsia as British writer Thomas Carlyle and the poets Wordsworth and Coleridge.

He returned to America in 1833 to a life as a poet, writer and lecturer. Emerson inspired Transcendentalism, although never adopting the label himself. He rejected traditional ideas of deity in favor of an "Over-Soul" or "Form of Good," ideas which were considered highly heretical. His books include Nature (1836), The American Scholar (1837), Divinity School Address (1838), Essays, 2 vol. (1841, 1844), Nature, Addresses and Lectures (1849) and three volumes of poetry. Margaret Fuller became one of his "disciples," as did Henry David Thoreau.

The best of Emerson's rather wordy writing survives as epigrams, such as the famous: "A foolish consistency is the hobgoblin of little minds, adored by little statesmen and philosophers and divines." Other one- and two-liners include: "As men's prayers are a disease of the will, so are their creeds a disease of the intellect." (Self-Reliance, 1841) "The most tedious of all discourses are on the subject of the Supreme Being." (Journal, 1836) "The first and last lesson of religion is, 'The things that are seen are temporal; the things that are not seen are eternal.' It puts an affront upon nature." (English Traits, 1856) "The god of the cannibals will be a cannibal, of the crusaders a crusader, and of the merchants a merchant." (Civilization, 1862) (D. 1882)

“The dull pray; the geniuses are light mockers.”