There are 3 entries for this date: Victoria Woodhull , Ani DiFranco and Walter Lippmann 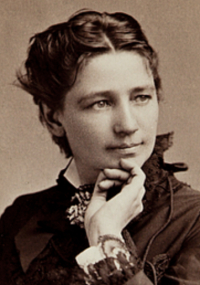 On this date in 1838, Victoria Woodhull was born in Ohio, the sixth of 10 children in an itinerant family. She and her sister Tennessee Claflin first became notorious as "clairvoyants" in a family money-making scheme. She married at 14 or 15 to an alcoholic and gave birth to the first of two children in her mid-teens, an experience that turned her into a challenger of the sexual double standard. Shaking off her marriage and her old life, she and her sister took on Wall Street. Known as "The Bewitching Brokers," the sisters became the first women to open a bank, with the backing of admirer and railroad tycoon Cornelius Vanderbilt.

At the national suffrage association in 1869, Victoria took feminists by storm with her impassioned argument that the 14th and 15th amendments already enfranchised women. She became the second woman in the nation, following Elizabeth Cady Stanton, to address the House Judiciary Committee. In 1872 Woodhull became the first woman to run for president, with Frederick Douglass as her vice president. The Woodhull & Claflin's Weekly, a lively, muckraking, feminist newspaper that she and her sister published for six years, specialized in iconoclasm, publishing the first English translation of Karl Marx's Communist Manifesto.

In 1872 Woodhull exposed a "black collar crime," reporting the common knowledge of the extramarital affair of the Rev. Henry Ward Beecher with Elizabeth Tilton, the wife of his friend Theodore Tilton. Beecher, the brother of Harriet Beecher Stowe and the most influential preacher in the land, got the sisters arrested under the Comstock Act for publishing obscenity. They were jailed for several weeks and forced to post a huge bond. After a long ordeal they were found innocent of obscenity in 1873 and of libel the following year. Stanton stood by Woodhull and condemned the religious hypocrisy but most feminists dropped her.

The sisters moved to England and married well. Although living a quieter life, Woodhull remained a suffragist and published a humanitarian periodical. Although she was a fearless critic of religious hypocrisy, she appeared to be deistic and never fully outgrew her early spiritualism. D. 1927.

“No legal ceremony — no election of the woman — no penalty for the perfidy of the man — no law to compel him to do his duty, no compensation for the poor woman who is turned adrift like the girl of the street, penniless, to sell herself on the best possible terms. This is Divine marriage, or Moses and the Bible lie; and this is Bible divorce — putting away!” 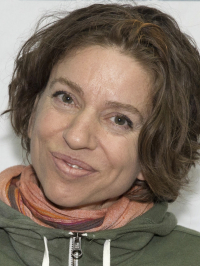 On this date in 1970, punk folksinger Ani DiFranco was born in Buffalo, N.Y. Ani (pronounced AH-nee) started singing Beatles covers in local bars as a youngster. By 15 she had begun writing her own material and was living on her own. She graduated at age 16 from the Visual and Performing Arts High School in Buffalo and moved to New York City at 18.

She has released over 20 albums as of this writing. Sing Out calls her lyrics "jaw-dropping." Spurning offers from indie and major labels alike, DiFranco started her own record company, Righteous Babe Records. She not only writes and publishes her own songs and produces her own recordings, but even creates the artwork. An in-demand artist, she tours acoustic, college and rock club circuits, winning over a diverse audience.

Her freethought views are revealed in such songs as "Animal" from "Educated Guess" (2004), in which she sings about growing up "surrounded by willful ignorance" and "the religions of men." She said in a May 2000 interview with The Progressive: "I'm not a religious person myself. I'm an atheist. I think religion serves a lot of different purposes in people's lives ... but then, of course, institutional religions are so problematic."

DiFranco in 2017 in Napa Valley, Calif. Photo via Shutterstock by Sterling Munksgard.

“I'm an atheist. ... How unfortunate it is to assign responsibility to the higher up for justice amongst people.”

—Ani DiFranco, interview by Matthew Rothschild, The Progressive (May 2000)

On this date in 1889, Walter Lippmann was born in New York City. He graduated from Harvard University in 1909 and went on to become a prominent journalist, editor and author. He became co-founder and editor of The New Republic in 1913, editor of the New York World in 1923 and a columnist for the New York Herald Tribune in 1931. At the Herald Tribune, Lippmann wrote the nationally syndicated column “Today and Tomorrow,” which ran in 250 newspapers for more than 30 years.

Lippmann was also a prolific author whose works include A Preface to Politics (1913), Public Opinion (1922) and The Cold War (1947), which popularized the term “cold war.” He was a U.S. delegate to the Paris Peace Conference of 1919 at the close of World War I, where he helped to write the Covenant of the League of Nations. Lippmann was awarded two Pulitzer Prizes in 1958 and 1962 for his column “Today and Tomorrow,” as well as the Presidential Medal of Freedom in 1964. He married Faye Albertson in 1917. After their divorce in 1937, he married Helen Armstrong in 1938.

In his popular book A Preface to Morals (1929), Lippmann writes about having morality without religion and explains that religion should not be a modern source of morality. “When men can no longer be theists, they must, if they are civilized, become humanists,” he wrote. “Once you weaken the belief that the central facts taught by the churches are facts in the most literal and absolute sense, the disintegration of the popular religion begins.” D. 1974

"The radical novelty of modern science lies precisely in the rejection of the belief, which is at the heart of all popular religion, that the forces which move the stars and atoms are contingent upon the preferences of the human heart.”