There are 3 entries for this date: Teller , Simon Pegg and Frederick Douglass 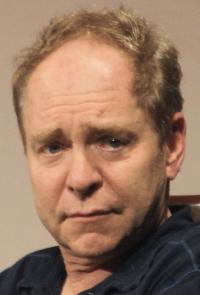 On this date in 1948, Teller was born Raymond Joseph Teller in Philadelphia, Pa. (Teller changed his name legally to his stage moniker, “Teller,” and has a U.S. passport issued with a single name.) Teller graduated Amherst College in 1969 and taught English and Latin in New Jersey before leaving to work as a magician in 1974. Teller and fellow magician Penn Jillette have been collaborators since 1975, at first as two of three members of The Asparagus Valley Cultural Society.

Since 1981, the two have performed exclusively as Penn & Teller. Teller is the “silent” half of the duo, performing stunts and magic tricks while Penn talks. He is so well known for his silence that video of him speaking is considered a novelty. According to an older version of Penn & Teller’s website, Teller began performing silently at fraternity parties because he found it was the best way to get party attendees to actually pay attention to his magic tricks.

Since 2001, Penn & Teller have performed their magic act at the Rio in Las Vegas, although they do occasionally continue to tour. In addition, they have appeared in several television specials as well as having created, produced and starred in two television shows, “Penn & Teller: Bullshit!” which aired on Showtime from 2003 to 2010, and “Penn & Teller Tell A Lie,” which aired on the Discovery Channel beginning in 2011. They started another hit TV contest show for aspiring magicians titled "Fool Us" in 2011 which returned in 2015 and ran for several years.

“Bullshit!” focused on challenging and debunking beliefs that are not questioned by those who hold them, including many religious views. “Penn & Teller Tell A Lie” focuses on portraying several true but astonishing facts as well as one urban legend. (The lies were revealed at the end of the season.) In 2014 he and Aaron Posner adapted and co-directed a critically acclaimed and commercially successful production of Shakespeare's "The Tempest," featuring songs by Tom Waits, at the American Repertory Theatre in Cambridge, Mass. Iterations of the production followed in Chicago, Los Angeles and Las Vegas. They followed that up with a Shakespearean "Macbeth" adaptation in Chicago in 2018.

Teller describes himself as a skeptic and atheist, and is a fellow of the libertarian Cato Institute. He has collaborated with Jillette and others to write books about magic and has written a biography of his father, “When I’m Dead, All This Will Be Yours!” Joe Teller: A Portrait by His Kid (2000). In 2003, Penn & Teller were the recipients of FFRF’s Emperor Has No Clothes Award.

“It's fair to say that the Bible contains equal amounts of fact, history, and pizza.” 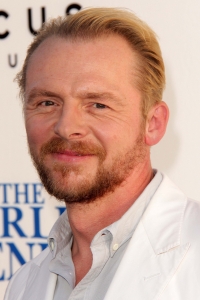 On this date in 1970, actor, screenwriter, comedian and author Simon John Pegg (né Beckingham) was born to parents Gillian Rosemary (née Smith), a civil servant, and John Henry Beckingham, a jazz musician, in Brockworth, England. Following his parents’ divorce when he was seven, Pegg adopted his stepfather’s surname. Showing a penchant for comedy at a young age, Pegg was the drummer of a band called “God’s Third Leg” when he was 16. Pegg studied English literature and performance studies at Stratford-upon-Avon College, later graduating from Bristol University in 1991 with a bachelor’s degree in theater, film and television.

Moving to London, Pegg pursued a career in standup comedy, which soon led to television opportunities. He emerged into the spotlight after co-writing and co-starring in the sitcom “Spaced” (1999-2001), for which he won a British Comedy Award. For the show, Pegg worked with writer and director Edgar Wright and co-star Nick Frost, who also happened to be his best friend and flatmate. Following the success of the show, Pegg continued to work with them, creating his most lauded films in the Three Flavours Cornetto Trilogy — “Shaun of the Dead” (2004), “Hot Fuzz” (2007) and “The World’s End” (2013).

Pegg married Maureen McCann in 2005 and they have one child.

“As an atheist, I'd skip the prayer and go straight to the colonel, who is arguably the god of affordable, bucket housed fried chicken bits.” 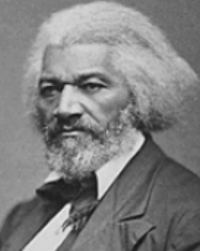 This date is traditionally celebrated as the birthday of Frederick Douglass (né Frederick Augustus Washington Bailey). Born as a slave in Maryland in 1818, he was to become a renowned abolitionist, editor and feminist. Escaping from slavery at age 20, he renamed himself Frederick Douglass and became an abolition agent. Douglass traveled widely, often at personal peril, to lecture against slavery. His first of three autobiographies, The Narrative of the Life of Frederick Douglass: An American Slave, was published in 1845.

In 1847 he moved to Rochester, New York, and began publishing a weekly newspaper, North Star. Douglass was the only man to speak in favor of Elizabeth Cady Stanton's controversial plank of woman suffrage at the first women's rights convention in Seneca Falls, New York, in 1848. As a signer of the Declaration of Sentiments, Douglass also promoted woman suffrage in North Star. Douglass and Stanton remained lifelong friends.

In 1870 Douglass launched The New National Era in Washington, D.C. He was nominated for vice president by the Equal Rights Party to run with Victoria Woodhull as presidential candidate in 1872. He became U.S. marshal of the District of Columbia in 1877 and was later appointed minister resident and consul-general to Haiti. His District of Columbia home is a national historic site. D. 1895.

* Editor's note: Douglass was fairly religious, so the quote below may be interpreted, as it has by numerous religious writers, as prayer is very ineffective without action behind it. A skeptic might paraphrase it as nothing fails like prayer.

“I prayed for twenty years but received no answer until I prayed with my legs.”