There are 1 entries for this date: Giordano Bruno (Executed) 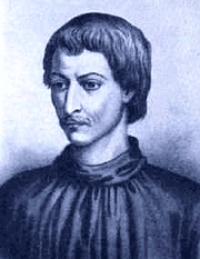 On this date in 1600, Giordano Bruno (né Filippo Bruno) was executed for heresy. The Italian philosopher was burned alive at the stake at age 52 for refusing to recant heretical ideas. Born in 1548, he entered the Dominican Order at Naples at age 15, adopting the name of Giordano. After being accused of heresy, he fled his Italian convent and traveled throughout Europe (1576-92). During two years in England, Bruno wrote and published six dialogues, including "On the Infinite, the Universe, and Worlds" and "The Ash Wednesday Supper."

A Copernican, he rejected Aristotelian dogma and challenged entrenched religious teachings, declaring pantheist views. Some academics today regard him as a path-blazing intellectual, others as a victim of his nonconformity. When Bruno returned to Italy in 1592, he was arrested by the Inquisition. He was imprisoned for seven years in the dungeons of Rome, where he was tortured and isolated before being executed.

Bruno was just one of the more visible martyrs and victims of church persecution. Anonymous are the thousands of women put to death as "witches." Known to us are such martyrs as Vanini, a monk burned as an atheist in 1619; Servetus, a Spanish physician executed under Calvin's orders in 1553 for rejecting the trinity; Scottish student Thomas Aikenhead, hanged in 1697 for saying Christ was merely human; and those persecuted in the New World. Roger Williams and Anne Hutchinson were banished for advocating religious tolerance. Quaker Mary Dyer was hanged in Boston in 1660 for heresy.

A statue to Bruno was erected at the site of his execution, Campo de' Fiori near the Vatican, in 1889 by "Freethinkers of the World." Biographer John Kessler wrote in "Giordano Bruno: The Forgotten Philosopher" (1900): "He is one martyr whose name should lead all the rest. He was not a mere religious sectarian who was caught up in the psychology of some mob hysteria. He was a sensitive, imaginative poet, fired with the enthusiasm of a larger vision of a larger universe."

"Perchance you who pronounce my sentence are in greater fear than I who receive it."

—Bruno's response to his judges upon conviction, quoted in "Giordano Bruno: His Life and Thought" by Dorothea Waley Singer (1950)