There are 2 entries for this date: Annie Besant and Charlie McDonnell 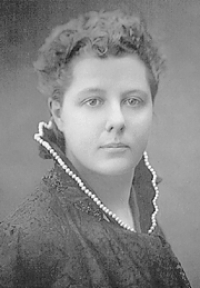 On this date in 1847, Annie Besant (née Wood) was born in London. The sheltered girl married the unpleasant Rev. Frank Besant (rhymes with "pleasant") at 20. The reverend, she later quipped in an early autobiography, had "very high ideas of a husband's authority and a wife's submission." Besant, after a course of reading, gave up Christianity at age 25 and soon after separated from her husband. In 1874 she met Charles Bradlaugh, Britain's most prominent freethought leader and an attorney for the poor, who offered her a position on the weekly National Reformer.

They embarked on a platonic professional partnership of writing, speaking and reform. Besant became a celebrity among reformers, with George Bernard Shaw praising her as "the greatest orator in England, and possibly in Europe." She persuaded Bradlaugh to reprint The Fruits of Philosophy, a book about birth control, to challenge the Obscene Publications Act. They were arrested, tried and narrowly avoided jail. She then rewrote the outdated booklet, but her involvement lost her custody of her 8-year-old daughter.

Annie became a student at London University when it agreed to admit women in 1878, receiving the only honors award in botany in 1881 in professor Thomas Huxley's class. She was the first woman on the London School Board and an advocate for working-class women and woman suffrage. Her enthusiasm for other causes and other men gradually strained her friendship with Bradlaugh. The rudest shock to Bradlaugh, his daughter Hypatia and other admirers came in 1889, when Besant adopted a new religious movement called theosophy.

Although retaining affection for freethought, she became a successor to the mystic founder of theosophy, Helena Blavatsky, and moved to India. A fanatical bent took Besant on a journey to occultism. But even in India, she was a true reformer, never quite losing her practical sensibilities. (D. 1933)

“I rejoice that I played my part in that educating of England which has made impossible for evermore the crude superstitions of the past, and the repetition of the cruelties and injustices under which preceding heretics suffered.” 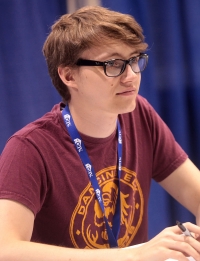 On this date in 1990, Charlie McDonnell was born in Bath, England, where he grew up. In 2007, while bored studying for exams, he started making videos for his YouTube channel, "charlieissocoollike." The channel became incredibly popular and in 2013 reached 2 million subscribers.

As a musician he was a member of the  Doctor Who-themed rock band Chameleon Circuit and of the short-lived project Sons of Admirals. He directed a series of short films in 2013-14 and co-hosted the YouTube breakfast show "Cereal Time" with fellow vlogger Jimmy Hill in 2015-16. In 2016 he published his first book, Fun Science.

McDonnell occasionally performs humorous songs, usually accompanying himself on the ukulele. He addresses scientific themes in songs like “A Song About Monkeys,” about evolution, and “Chemical Love,” on the physical origins of human emotion. In “A Song About Monkeys” he tells a gorilla: “You’re my favorite animal, but I’m biased I guess, because you look quite a bit like me. ... You’re just like me, ’cause I’m an animal. We’re of the same biology.”

McDonnell often addresses scientific ideas from a rational perspective in his videos and calls himself an atheist. In 2017 he moved to Canada, his girlfriend's homeland. He announced on Twitter in March 2019 that he was quitting YouTube posting to pursue screenwriting.

PHOTO: By Gage Skidmore under CC 3.0.