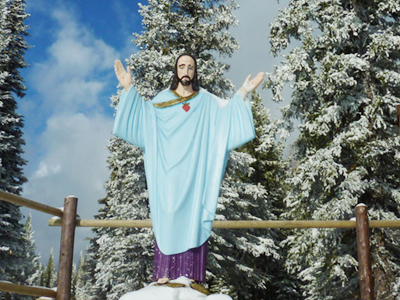 FFRF filed suit in U.S. District Court in Montana, challenging the Forest Service's decision to renew a special permit for a "shrine to our Lord Jesus Christ" on federal property in the Rockies. The Knights of Columbus, a conservative Roman Catholic men's club, placed a devotional shrine on Big Mountain near Whitefish Mountain's Resort Chair Two in Flathead National Forest, in violation of the Establishment Clause of the First Amendment to the Constitution. On June 24, 2013, U.S. District Judge Dana Christensen issued a ruling granting summary judgment for the Defendants.

FFRF filed a notice of appeal on August 22, 2013. The case was heard by the Ninth Circuit Court of Appeals.

Amicus briefs filed in support of the government:

In August 2015, the Ninth Circuit, in a comparatively short 2-1 decision, ruled the Catholic shrine could stay. The blistering dissent noted, ". . . despite arguments to the contrary, a twelve-foot tall statue of Jesus situated on government-leased land cannot realistically be looked upon as 'predominantly secular in nature.'"