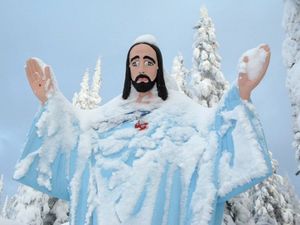 The Freedom From Religion Foundation, a national state/church watchdog representing 23,000 members nationwide, announced it will ask for a review by the entire panel of the Ninth Circuit Court of Appeals of today's 2-1 decision permitting a shrine to Jesus on federal land in Big Mountain, Montana. The case was filed on behalf of FFRF's members, including more than 100 in Montana and those "who have had direct and unwanted exposure to the shrine."

FFRF filed the federal lawsuit in 2012 over the Forest Service's decision to renew a special permit whose stated purpose was to erect a "shrine to our Lord Jesus Christ" on federal property in the Rockies. The Knights of Columbus, a conservative Roman Catholic men's club, has placed a devotional shrine on Big Mountain near Whitefish Mountain's Resort Chair Two in Flathead National Forest, in violation of the Establishment Clause of the First Amendment to the Constitution.

"First, despite arguments to the contrary, a twelve-foot tall statue of Jesus situated on government-leased land cannot realistically be looked upon as 'predominantly secular in nature.'

"Second, to determine the effect of the statue we ask whether 'it would be objectively reasonable for the government action to be construed as sending primarily a message of either endorsement or disapproval of religion.' I submit that a 'reasonable observer would perceive' the statue situated on government land "as projecting a message of religious endorsement." (legal citations removed)

FFRF Co-President Annie Laurie Gaylor called it "phony" and a "sham" to pretend that a "giant Jesus" is secular, thereby ignoring the Knights of Columbus' stated purpose. The Catholic men's club has "leased" at no cost the prominent parcel of land on the federal ski slope to display its Catholic shrine. "That means federal taxpayers are subsidizing religious speech, in this case Catholic," Gaylor said. She added that devout religionists should be offended at a decision that purports that a sacred image of a god is not religious.