The FamilyEllery's Protest
Back to: Books 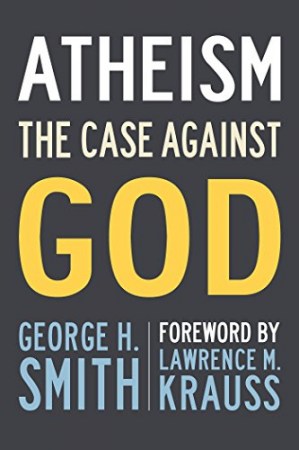 Atheism The Case Against God

Does a god exist... this question has undoubtedly been asked, in one form or another, since man has had the ability to communicate. Thousands of volumes have been written on the subject of a god, and the vast majority have answered the questions with a resounding Yes. You are about to read a minority viewpoint.

With this intriguing introduction, George H. Smith sets out to demolish what he considers the most widespread and destructive of all the myths devised by man - the concept of a supreme being. With painstaking scholarship and rigorous arguments, Mr. Smith examines, dissects, and refutes the myriad proofs offered by theists - the defenses of sophisticated, professional theologians, as well as the average religious layman. He explores the historical and psychological havoc wrought by religion in general - and concludes that religious belief cannot have any place in the life of modern, rational man.

It is not my purpose to convert people to atheism . . . but to demonstrate that the belief in God is irrational to the point of absurdity. If a person wishes to continue believing in a god, that is his prerogative, but he can no longer excuse his belief in the name of reason and moral necessity.