Freethought Radio & Podcast Radio for the Rest of Us! 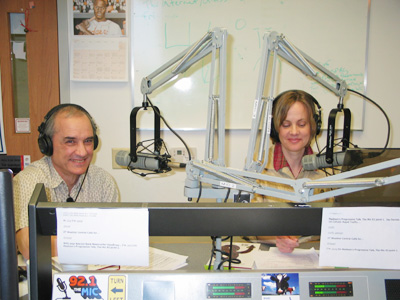 Radio from the Secular Point of View

Freethought Radio, from the secular point of view, broadcasts weekly and is hosted by Dan Barker and Annie Laurie Gaylor, co-presidents of the Freedom From Religion Foundation. The show offers programming for nonreligious listeners, as well as countering the religious-right domination of our public airwaves. Freethought Radio features music and interviews with authors and activists. Check out Freethought Radio's illustrious list of guests, including Richard Dawkins, Julia Sweeney, Janeane Garafalo, Ron Reagan, Betty Rollins, Christopher Hitchens, Steven Pinker, Ursula K. Le Guin and so many other fascinating freethinkers, newsmakers and thinkers.

And on various online stations & podcasts such as tunein.com, stitcher.com, and learnoutloud.com

Listen to podcasts dating from April 2006 (arranged by year) here.

About the Show and Incidental Music

Announcer ("voice deity") is Buzz Kemper, of Audio for the Arts, Madison, Wis., a member of the Foundation. Incidental music is performed on the piano and/or arranged by host Dan Barker. Listen carefully to the "intro" and "outro" music to pick out Dan's arrangements of strains from the ballad "Annie Laurie," from Dan's "Friendly Neighborhood Atheist," "Salt Lake City Blues," Gershwin's "It Ain't Necessarily So," Irving Berlin's "Pack Up Your Sins and Go to the Devil in Hades," Dan's improvised "freethought gospel" music, and the famous 16th century freethought ballad, "Die Gedanken Sind Frei" ("Thoughts Are Free"). Other incidental music was created especially for the show by Dan. You can listen to yourself! Hundreds of freethought members have recorded greetings to air on Freethought Radio at FFRF conventions.

Get Freethought Radio on Your Local Station!

Ask your local radio station to carry Freethought Radio, which is available without cost. Counter the 24/7 domination of our public airwaves by religious proselytizers with some rational radio and blasphemous broadcasting. Phone the Foundation at 608/256-8900 if you have questions.

Find out more about co-hosts Dan Barker and Annie Laurie Gaylor, co-presidents of the Freedom From Religion Foundation.

E-mail a question or comment to This email address is being protected from spambots. You need JavaScript enabled to view it.. 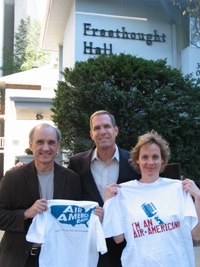 Check this website by Thursdays at 5 p.m. to listen to the new podcast.