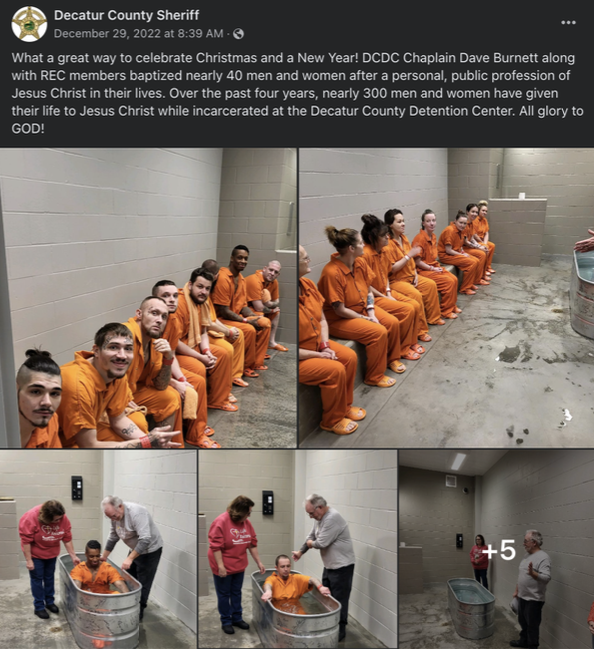 Update: In a previous version of its press release, FFRF stated that Dave Durant was the sitting sheriff. Shortly before it was released, Bill Beyerrose was inaugurated as sheriff. FFRF has sent a fresh letter to the new sheriff.

Immediately cease your unabashed Christian proselytizing, the Freedom From Religion Foundation is insisting to an Indiana sheriff’s department.

On Dec. 29, the Decatur County Sheriff’s Facebook page posted a series of photographs (see FFRF letter) displaying Decatur County Detention Center inmates being baptized. The post shows a clear association with Christianity, reading, “Over the past four years, nearly 300 men and women have given their life to Jesus Christ while incarcerated at the Decatur County Detention Center. All glory to GOD!” The demeaning religious ceremonies take place in an unhygienic shared tub and are led by a Christian evangelizing group.

This egregiously violates the First Amendment, FFRF points out.

By holding sectarian religious events in the Decatur County Detention Center, the sheriff’s department shows a clear allegiance to the Christian religion, putting the department in direct violation of the Establishment Clause. Prisoners will feel pressured to participate in these events when the sheriff himself is organizing them, creating a literal captive audience for Durant.

This is notably not the first time that FFRF has had to write to Durant, since it last reached out in July 2022.

Residents of Decatur County depend on the sheriff’s department during potentially life-threatening situations, FFRF emphasizes, and rely upon the department to act impartially. By repeated promotion of his own personal religion on official social media pages, Durant sends the message that he and the entire sheriff’s department have a preference for Christian community members, expect inmates to kowtow to his religion to the point of undergoing baptisms and would prefer to exclude the approximately 30 percent of Americans who identify as nonreligious.

FFRF warns that if Durant insists on continuing religious proselytization of inmates, he is inviting legal liability, as seen in American Atheists v. Watson, in which the Bradley County Sheriff’s Office in Tennessee agreed to pay over $40,000 in damages and attorney’s fees for promoting religion on social media despite objections. Durant’s First Amendment violations are more invasive and widespread. Participation by inmates in a detention facility cannot be termed “voluntary,” as the sheriff contends.

The state/church watchdog therefore demands Durant and the entire Decatur County Sheriff’s Department immediately stop organizing Christian events in the detention center, including baptisms, and put a halt to the promotion of Christianity on official social media pages.

“This is one of the more serious and offensive First Amendment violations we have encountered in a sheriff’s department,” says FFRF Co-President Annie Laurie Gaylor. “The proselytization needs to stop.”

The Freedom From Religion Foundation is a national nonprofit organization with over 39,000 members and several chapters across the country, including more than 500 members and a local chapter in Indiana. Our purposes are to protect the constitutional principle of separation between state and church, and to educate the public on matters relating to nontheism.