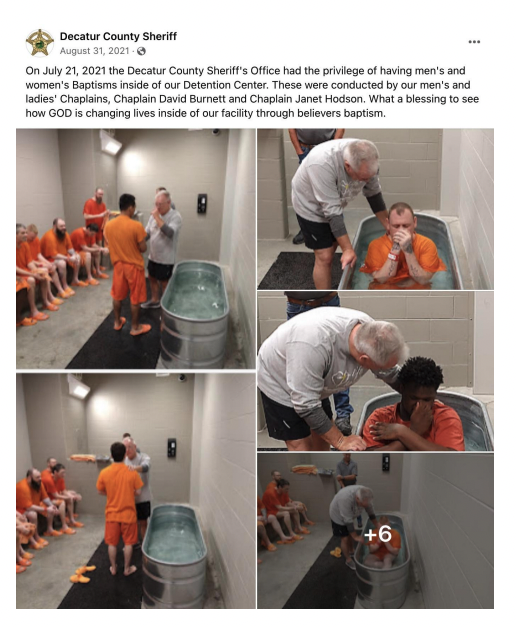 An Indiana sheriff’s department must immediately cease putting together Christian events, including baptismals, inside its detention center, insists the Freedom From Religion Foundation.

Several Decatur County residents have informed the state/church watchdog that the Sheriff’s Department has organized a number of religious functions involving inmates inside the Decatur County Detention Center. Sheriff Dave Durant coordinated a “Residents Encounter Christ” weekend in May 2019. He thanked in a Facebook post two department employees for their “tireless work” in helping arrange the event. There were reportedly separate Residents Encounter Christ events for male and female inmates in September 2019. At the men’s event, 34 inmates were baptized and at the women’s event, “EVERY female inmate volunteered to attend this Christ-centered weekend” with 21 baptisms. The Greensburg Fire Department was enlisted to help “fill the baptismal.”

The Decatur County Detention Center again held Residents Encounter Christ events for its inmates in June 2021. Six different local churches were involved. Durant described the Christian Decatur County Detention Center program as “the launch pad for all other programs offered inside our facility.” There were two more Residents Encounter Christ events this April in which many inmates “professed or rededicated their life to Jesus Christ.”

Most problematically, there have seemingly been a large number of Christian baptisms inside the Decatur County Detention Center. After a round of inmate baptisms, the Sheriff’s Department Facebook page described on Aug. 31 of last year how it was “a blessing to see how GOD is changing lives inside of our facility through believer’s baptism.” The Sheriff’s Department posted on Jan. 7 this year about how “GOD is good!” and celebrated 21 more inmate baptisms. And there were reportedly 36 more baptisms inside the detention center on June 24. The Facebook post noted that this was a “glorious day for Heaven and each of these men and women.”

Citizens interact with and rely on law enforcement officers during some of the most urgent and vulnerable times of their lives, FFRF reminds the sheriff. The promotion of Christianity by his department sends a message that excludes the 37 percent of Americans who are non-Christian, including the nearly one in three Americans who identify as nonreligious.

And the Sheriff Department’s promotion of Christianity needlessly jeopardizes taxpayer dollars by exposing the county to legal liability. Not long ago, the sheriff’s office in Bradley County, Tenn., agreed to pay more than $40,000 in damages and attorneys’ fees after promoting religion on social media and ignoring objections to the practice.

The Decatur County Sheriff’s Department is planning and promoting all these religious programs to advance Christianity and coerce inmates and the broader Decatur County community to adhere to the tenets of Christianity. To avoid further Establishment Clause concerns and to protect the rights of its inmates and the general public, the Sheriff’s Department must stop such activities.

“This is an appalling misuse of official resources,” says FFRF Co-President Annie Laurie Gaylor. “The Decatur County Sheriff’s Department is acting like an arm of the church, instead of an arm of secular law. It must immediately cease promoting religion and baptizing and proselytizing its inmates.”

The Freedom From Religion Foundation is a national nonprofit organization with over 37,000 members and several chapters across the country, including more than 500 members and a local chapter in Indiana. Our purposes are to protect the constitutional principle of separation between state and church, and to educate the public on matters relating to nontheism.