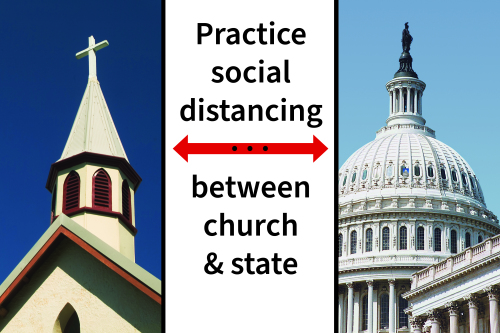 The Freedom From Religion Foundation applauds a major victory for separation of state and church in Arkansas, where voters wisely rejected an attempt to insert religious privilege in the state Constitution.

Issue 3 on the Arkansas ballot, sponsored by Christian nationalist state Sen. Jason Rapert, would have placed the text of the Religious Freedom Reformation Act (RFRA) into the Arkansas Constitution. This would give churches and religious business owners an exemption to any law they didn’t like for religious reasons, forcing the government to overcome a tall legal hurdle to justify the religious “burden.”

In practice, state RFRAs, and their federal predecessor, have legalized discrimination and caused massive harm. Hobby Lobby notoriously denied its employees reproductive health care insurance because of its wealthy owners’ religious objections to contraception, and RFRA allowed them to do it. Women, LGBTQ individuals — and all secular Arkansans — can breathe a sigh of relief that Issue 3 has failed.

FFRF urged its members to show up and vote against Issue 3, and it’s no surprise that they did; a recent internal survey showed that more than 95 percent of FFRF members are registered to vote. Every one of those votes counted, as Issue 3 was rejected very narrowly, by only 7,500 votes.

This is part of a national trend, with a growing portion of the American voting population becoming less religious and more civically engaged. Elected officials would be well advised to heed this trend and listen to their secular constituents. FFRF recently launched a campaign to help educate the public about this quickly emerging voting bloc.

The defeat of Issue 3 in Arkansas is a testament to its growing power.