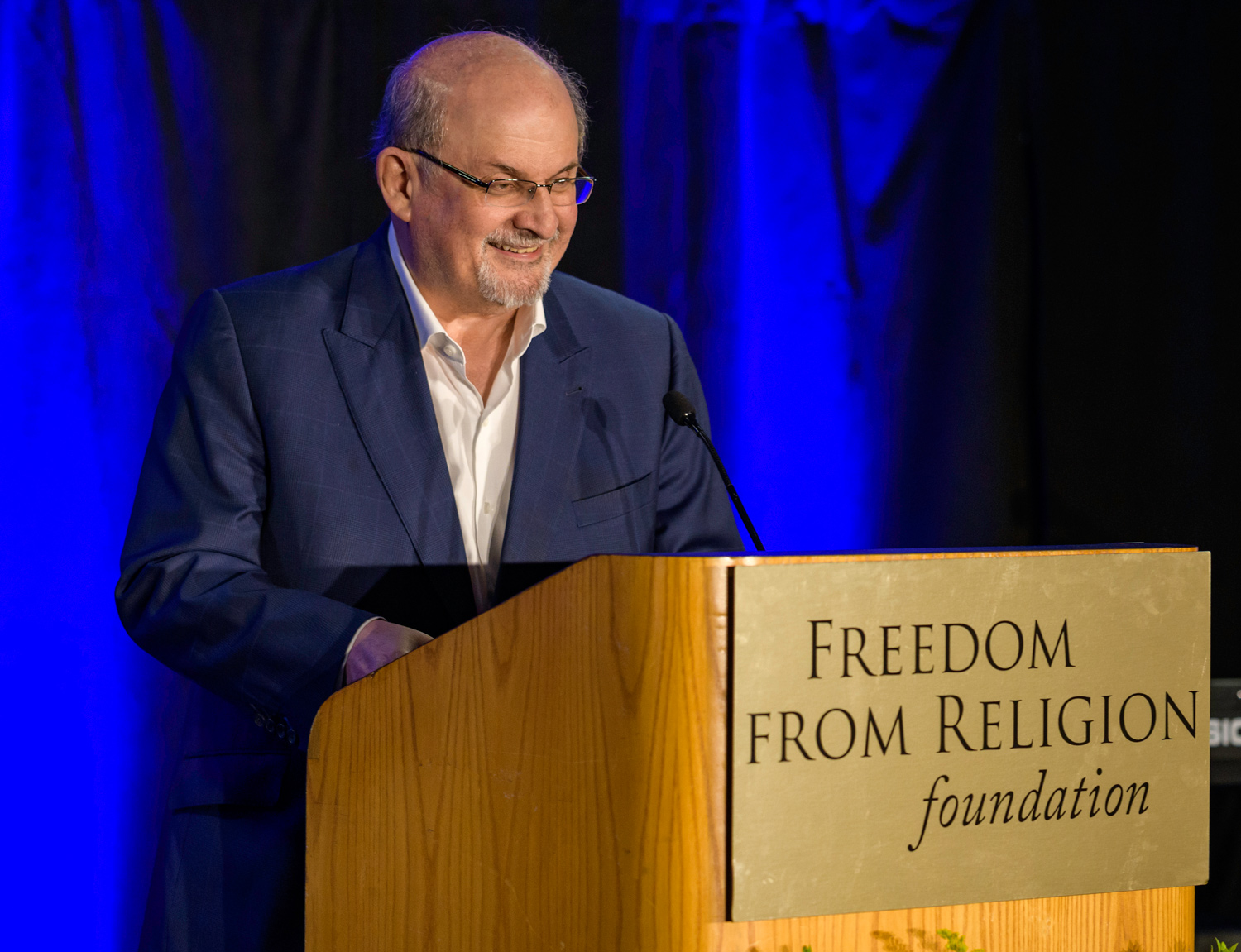 The Freedom From Religion Foundation decries the vicious attack on writer Salman Rushdie.

Rushdie, of course, is perhaps best known for his Satanic Verses, which had Iran’s Ayatollah Khomeini issuing a death sentence on the author for alleged blasphemy. Rushdie was reportedly stabbed while at a public event in New York on Friday morning. While the motives of the assailant are not yet known, any onslaught against free speech — regardless of motivations — is an aggression against the bedrock principles of free society.

“We cannot immediately think of any comparable incident of a public violent attack on a writer during a literary event here in the United States,” the New York Times quotes Suzanne Nossel, the chief executive officer of the nonprofit literary organization PEN America, as saying.

She adds, “Salman Rushdie has been targeted for his words for decades, but has never flinched nor faltered.”

That is indeed quite true. Although Rushdie had to lie low for some years after Khomeini’s edict — understandable considering a translator of Satanic Verses was killed and a publisher seriously injured — he regained his public profile in recent times. This makes the assault on him even more surprising and contemptible.

The root cause of the animus against freethinking writers such as Rushdie stems from the completely absurd notion of blasphemy. FFRF has been in the forefront of pointing out the bizarreness of this whole concept: Blasphemy is a victimless crime but it ironically creates innocent victims — either through blasphemy laws (in place in 80 countries) or through vigilante ventures, such as in the Satanic Verses saga.

Rushdie, incidentally, is a brilliant writer whose oeuvre is incredibly impressive. His Midnight’s Children is considered a landmark of English literature. He is also famously outspoken about a range of issues, such as the current Hindu nationalist government in India and past U.S. presidents.

The Freedom From Religion Foundation was privileged to give Rushdie its Emperor Has No Clothes Award (conferred on personalities who “tell it like it is” about religion) at its 2018 national convention in San Francisco. He delivered a witty, erudite talk at the occasion with a focus on free speech and freethought.

“I think the one thing we can now say with a high degree of certainty is that the answers given by every single one of the world’s great religions, and many of the smaller ones, too, are 100 percent incorrect,” he said. “We are no longer those ignorant people who had to tell ourselves those fables. Science has better stories, and many of them are verifiable. But what is even better is that science is willing to say that it doesn’t know everything.”

A remark that he made then has proven horribly prescient.

“It’s interesting that we live in a time when the Second Amendment is sacrosanct with the First Amendment under attack every day,” he stated.

The Freedom From Religion Foundation wishes Salman Rushdie the speediest of recoveries. The world needs more brave writers such as him to speak up — without the fear of being attacked.