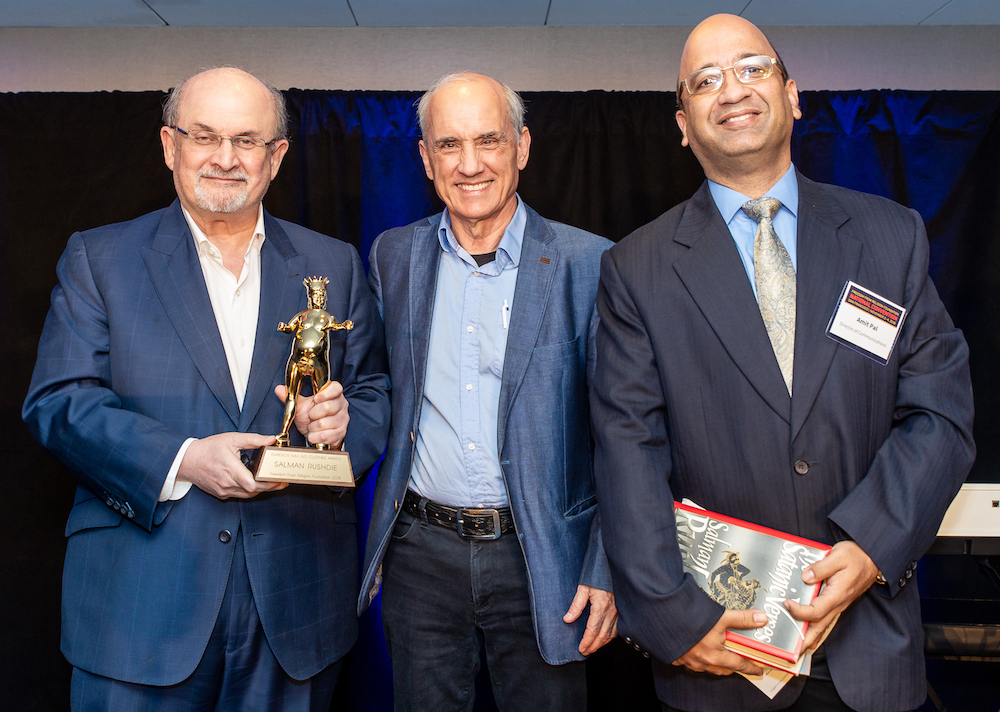 He was introduced at the convention by FFRF’s Communications Director Amit Pal: “Salman Rushdie is one of the most celebrated writers and public intellectuals of our time and the author of a dozen novels, including the Booker Prize-winning Midnight’s Children and The Satanic Verses, and, most recently, The Golden House. He was knighted by Queen Elizabeth in 2007 and has served as president of the PEN American Center.”

Rushdie received FFRF’s Emperor Has No Clothes Award, which is given to public or well-known personalities who “tell it like it is” about religion. As part of Rushdie’s speaking agreement, he would not allow FFRF to reproduce his speech in print, nor would he allow it to be videotaped or audiotaped. (One more reason to attend FFRF’s conventions in person!) But we did take notes, and here are a few of the notable lines and observances from his humorous, informative and interesting talk.

“The magic of the language of truth is the only magic in which I believe. And I have to believe, and I think we must all believe, that, in the end, the truth will set us free.”

“When Christopher [Hitchens] finished his book God Is Not Great, I was one of the people that he sent it to as an early reader. I told him, half-jokingly, that the title was one word too long. He could usefully delete the last word. He ignored my advice.”

“Some religious people can perpetrate attacks on other folks by redefining the word ‘liberty’ to mean something like ‘divinely authorized bigotry.’ Refusing to serve gay people in stores or to certify their weddings is an example of this kind of Bible Belt liberty.”

“We live in this age in which there is an unprecedented attack on truth itself, in which deliberate lies are masked by the accusation that those who would unmask them are indeed the liars. We live in the age of the world turned upside down. The lunatics are running the asylum.”

“I have nothing but admiration these days for the diligence with which the news media, under ferocious attack, have held to their vital ideal that the truth is the truth and lies are lies and has continued to do its work. If these are the enemies of the people, then I am happy to be named among them.”

“It’s interesting that we live in a time when the Second Amendment is sacrosanct with the First Amendment under attack every day.”

“The gods were born because human beings did not understand the world. . . . Let us be clear here. The gods did not create us in their image. We created them in ours.”

“Here’s what happens in human history: Ethics change as societies change. And one definition of a free society is that in such a society, morality advances through discussion and argument and the examination of its own ideas. A society can, at one point, accept slavery and then, at another point, it can decide that it’s a terrible idea. It can at one point deny women the right to vote and then it can change its mind about that or it can be pressured into doing so. The point is that argument, the battle about ideas, is the way in which free societies move forward.”

“I think the one thing we can now say with a high degree of certainty is that the answers given by every single one of the world’s great religions, and many of the smaller ones, too, are 100 percent incorrect. We are no longer those ignorant people who had to tell ourselves those fables. Science has better stories, and many of them are verifiable. But what is even better is that science is willing to say that it doesn’t know everything.”

“The subject of godlessness is still pretty unusual in America. It’s certainly unusual to find oneself in such a sizable gathering of the ungodly [here at FFRF’s convention]. In many halls where one finds oneself at the lecture podium, if you talk about your disbelief in any form of religion, you hear noises of shock in the darkness. Gasps. Sharp intakes of breath. Little nervous giggles. In America, you can’t get elected dog catcher if you can’t prove that you go to church every Sunday.”

“To tell you the truth, I never even thought of myself as a writer who was primarily a writer about religion. I mean, it wasn’t my plan. I wrote one book in which there was something about it and suddenly people began to think that that’s what I was. Actually, I’m really not, because religion, as I’ve been trying to explain, is something I don’t like. Who wants to spend their lives writing about things they don’t like? Well, Kafka.”