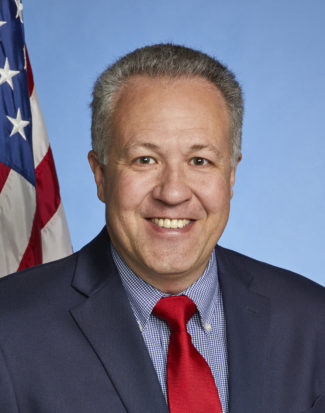 The Freedom From Religion Foundation is condemning Indiana state Sen. Mike Gaskill’s un-American statements during a debate on abortion in which he said our government must “represent Jesus.”

In supporting Amendment 58, which would have removed exceptions for abortions caused by rape and incest from the abortion ban passed recently by the Indiana Senate, Gaskill publicly stated that he thinks he was elected to do what “our lord and savior wants us to do.” Gaskill noted, in defending this cruel amendment, that “senators who vote for the amendment will face consequences, such as not being re-elected,” and piously declared, “I am up here today to represent Jesus. Please don’t villainize those of us that are going to vote for this amendment. … We’re holding to our deeply held beliefs on what we think our lord and savior wants us to do.”

On the contrary, the national state/church watchdog, with members throughout Indiana, tells him: You are here to support and defend the secular U.S. Constitution.

FFRF notes that most Americans, and Hoosiers, do not agree with Gaskill’s radical religious views on abortion rights. More than six-in-10 Americans say abortion should be legal in all or most cases. Gaskill’s remarks are also exclusionary toward non-Christians and nonreligious Americans — the fastest-growing segment of the U.S. population by religious identification. Thirty-five percent of Americans are non-Christians, and this includes nearly 30 percent of adult Americans who now identify as religiously unaffiliated.

“Attempting to impose your personal religious beliefs through your elected position is an insult to those Hoosiers [who are non-Christian], as well as to the core American values of bodily autonomy and separation of state and church,” FFRF Co-Presidents Annie Laurie Gaylor and Dan Barker write in a letter to Gaskill. “If you cannot honor your oath of office to protect and defend America’s secular Constitution, you should resign.”

Gaskill’s duty as an elected official is not to “represent Jesus” or do what he “think(s) our lord and savior wants us to do,” but to the Constitution, FFRF insists.

The Freedom From Religion Foundation is a national nonprofit association with more than 37,000 members across the country, including more than 500 members in Indiana. FFRF protects the constitutional separation between state and church and educates about nontheism.