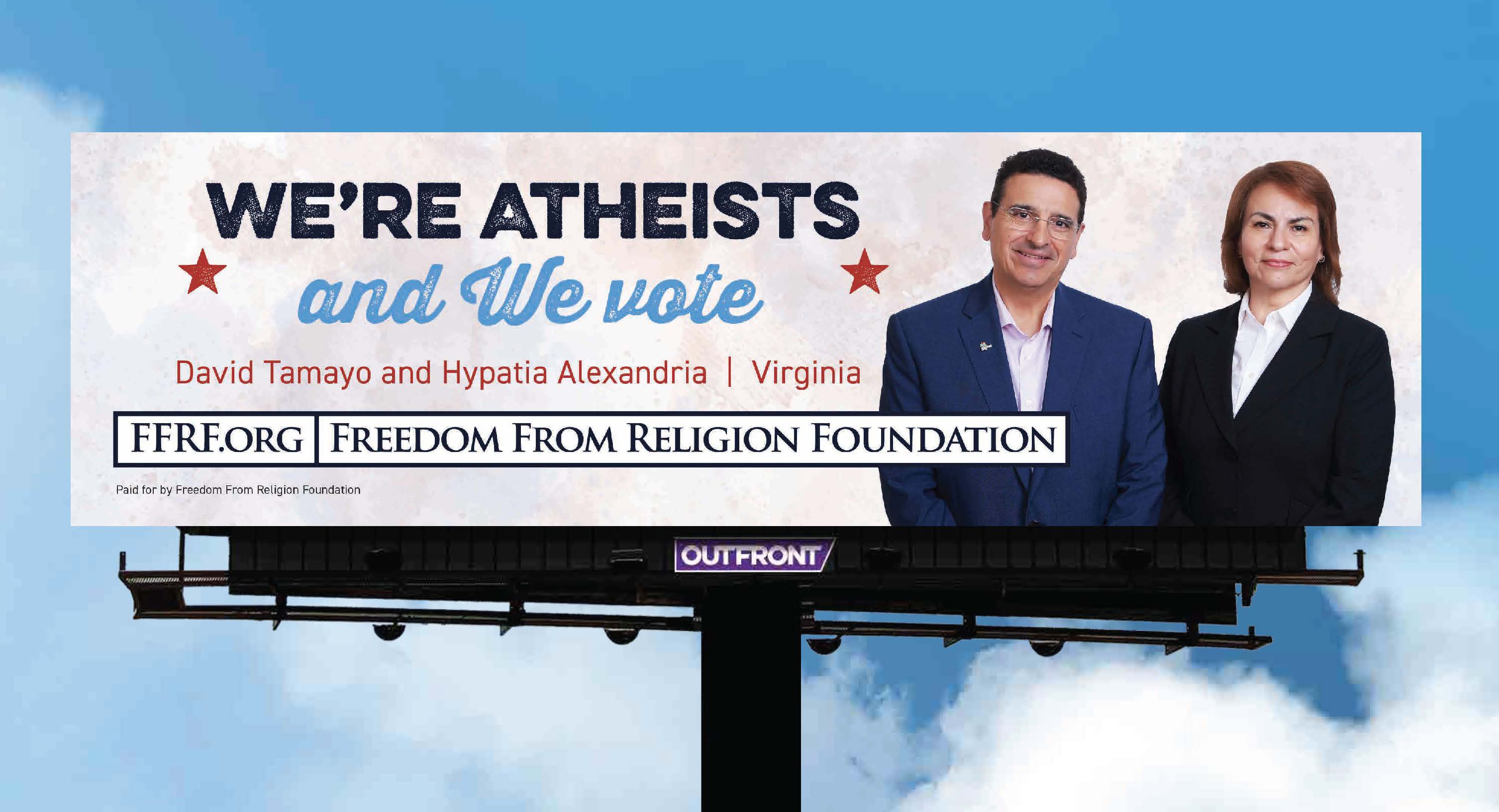 A 14x48-foot billboard featuring a Virginia couple proudly proclaiming “We’re Atheists and We Vote” has just gone up at I-95 and 1401 Commerce Road, Richmond, Va., as part of a national multimedia secular voter campaign launched by the Freedom From Religion Foundation in this critical election year.

The couple, David Tamayo and Hypatia Alexandria, are co-founders of Hispanic American Freethinkers. They will also be featured in a full-page ad, pictured in front of the state Capitol, that will run on Sunday, July 3, in the Richmond News. The ad identifies David as a “husband, father, Hispanic, CIO, Virginian . . . and Atheist” and Hypatia as “a mother, grad student, Virginian . . . and an Atheist.”

FFRF points out that the couple, who live in Sterling, Va., are two of 75 million nonreligious Americans who want Congress, state legislatures, public officials and courts to listen to “secular values voters” by keeping religion out of government and social policy — and that includes on the urgent question of abortion rights.

In the newspaper ads, they note: “The ‘Nones’ (those of us unaffiliated with religion) are now 29 percent of the U.S. population. We are the largest ‘denomination’ by religious identification!”

Hypatia is a Ph.D. student in Planning, Governance and Globalization at Virginia Tech. She works with the Hispanic community in housing and equity issues. She currently serves as a member of the Loudoun County Housing Advisory Board; the Virginia Board for Architects, Professional Engineers, and Land Surveyors; the Access for All, and the Citizen Advisory Committee of the National Capital Region Transportation Planning Board at the Metropolitan Washington Council of Governments.

David is president of Hispanic American Freethinkers, which is the first and only national Latino 501(c)(3) educational organization of its kind. He was vice president of the Reason Rally 2016, former host of the TV Show “Road to Reason — A Skeptic’s Guide to the 21st Century,” founding Board Director of Camp Quest — Chesapeake, and host of Contrapuntos podcast. He is Chief Information Officer for a large aerospace engineering company in Washington, D.C. He holds a bachelor’s degree in Computer Science from George Washington University, and a Master’s in Management in Information Technology from University of Virginia. David joined the FFRF Executive Board as a director at large in the fall of 2020.

Saying they “trust in reason, science and America’s secular Constitution,” the couple lists a compelling number of secular voter demands: To keep religion out of government and social policy, out of public schools, and out of bedrooms, personal lives and health care decisions — including when or whether to have children, and whom to love or marry. “Use my tax dollars only for evidence-based, not faith-based, purposes,” they emphasize.

The Freedom From Religion Foundation serves as the nation’s largest association of freethinkers (atheists and agnostics), with more than 36,000 members, including almost 800 in Virginia, and works as a state/church watchdog to safeguard the constitutional principle of separation between state and church. To learn more, visit: ffrf.org. 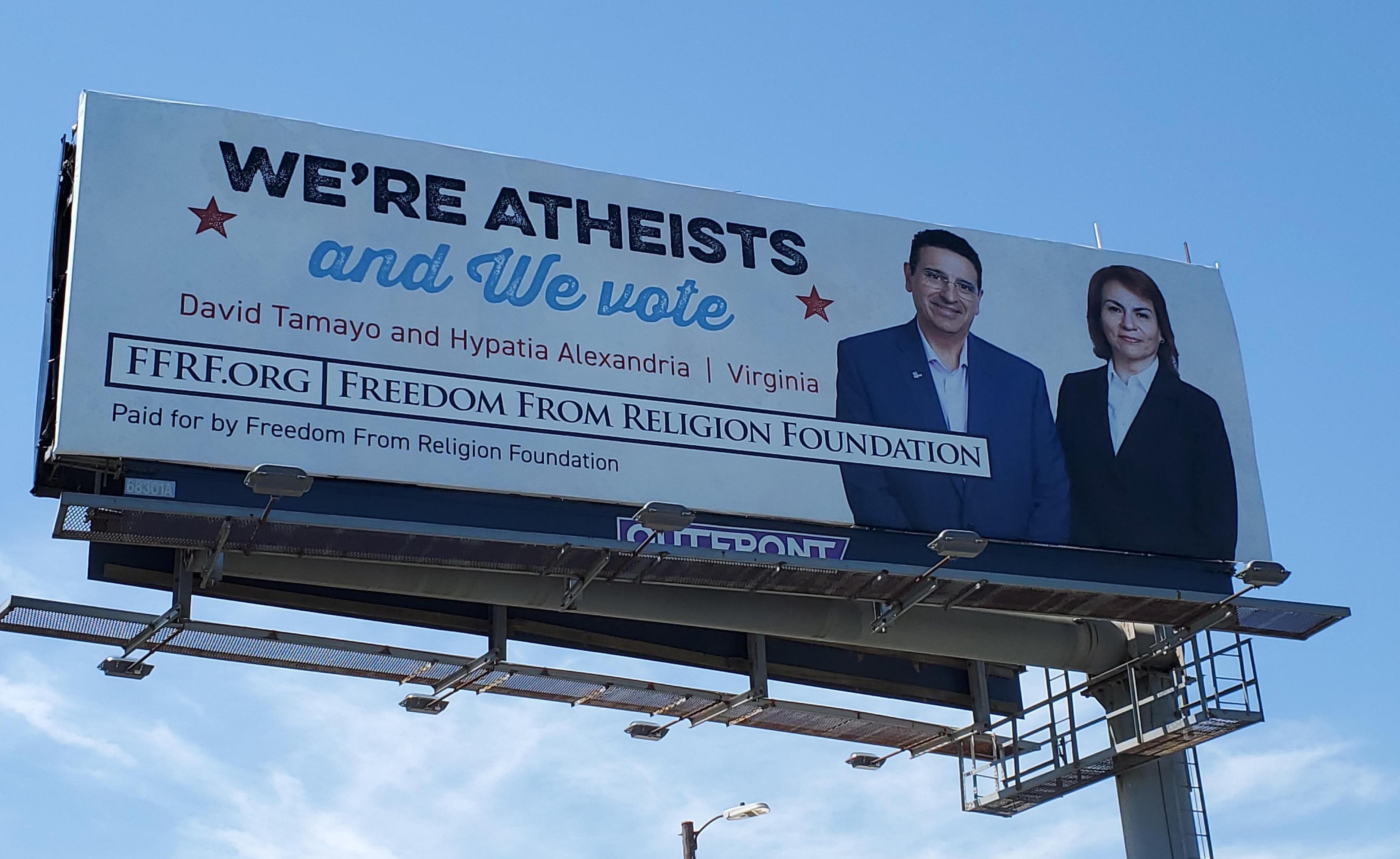