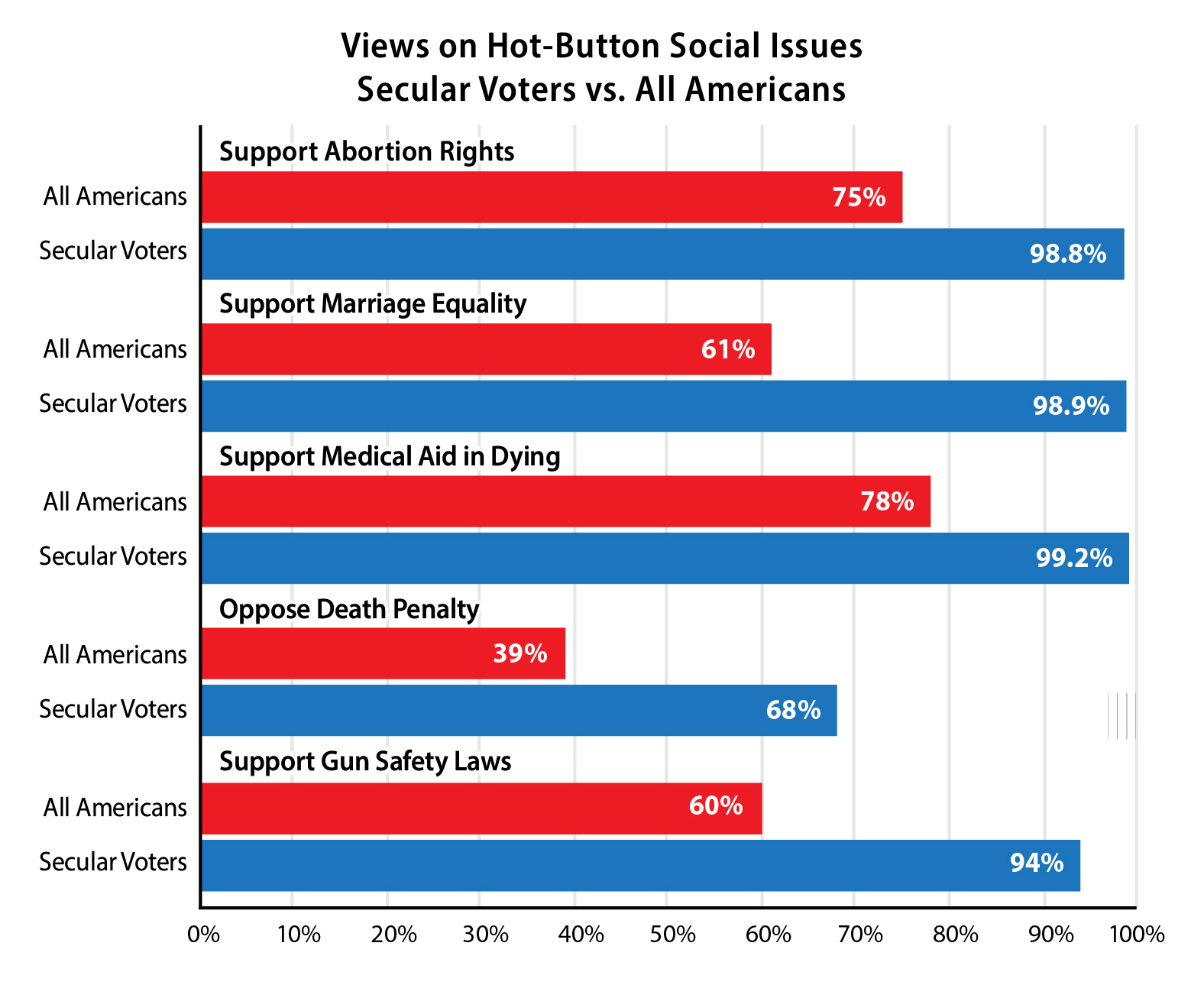 What do nonreligious American voters want?

The Freedom From Religion Foundation has just released a major new secular poll of more than 12,000 registered voters who are atheists or agnostics, providing a fascinating profile of American nonbelievers and their views on the major social issues of the day. All respondents are members of the Freedom From Religion Foundation, a national state/church watchdog that is the largest freethought association in the United States — with more than 32,000 members.

Major surveys consistently show that 26 percent of the adult population are either atheists, agnostics or identify as “Nones,” having no religious identification, a demographic that now outnumbers Catholics (at 20 percent).

“We Nones — religiously unaffiliated adults in America — are now the largest ‘denomination’ by religious identification,” says FFRF Co-President Annie Laurie Gaylor. “Yet most candidates and media outlets focus their time on traditional religious groups, and ignore this major demographic. We’re releasing this voter poll so that our views will be heard, too.”

Fully 98 percent of the respondents are registered voters, 70 percent of whom identify as atheist, 9 percent as humanist or freethinker and 7 percent as agnostic (with 4.5 percent preferring another term). Average age is 64. More than half (56 percent) identify their political voting pattern as Democratic, 17 percent as “progressive” and 16 percent as “independent” (with 1.9 percent Libertarian, 1.4 percent Republican and 3 percent Socialist and a smattering of other).

The data show with startling clarity that nonbelievers embrace a humanistic social policy in vastly higher numbers than the general U.S. population.

Their support for women’s rights, reproductive rights and LGBTQ rights is overwhelming, as well as for medical aid in dying:

Nontheists also show far more support than the general population for some hotly debated reform, such as: 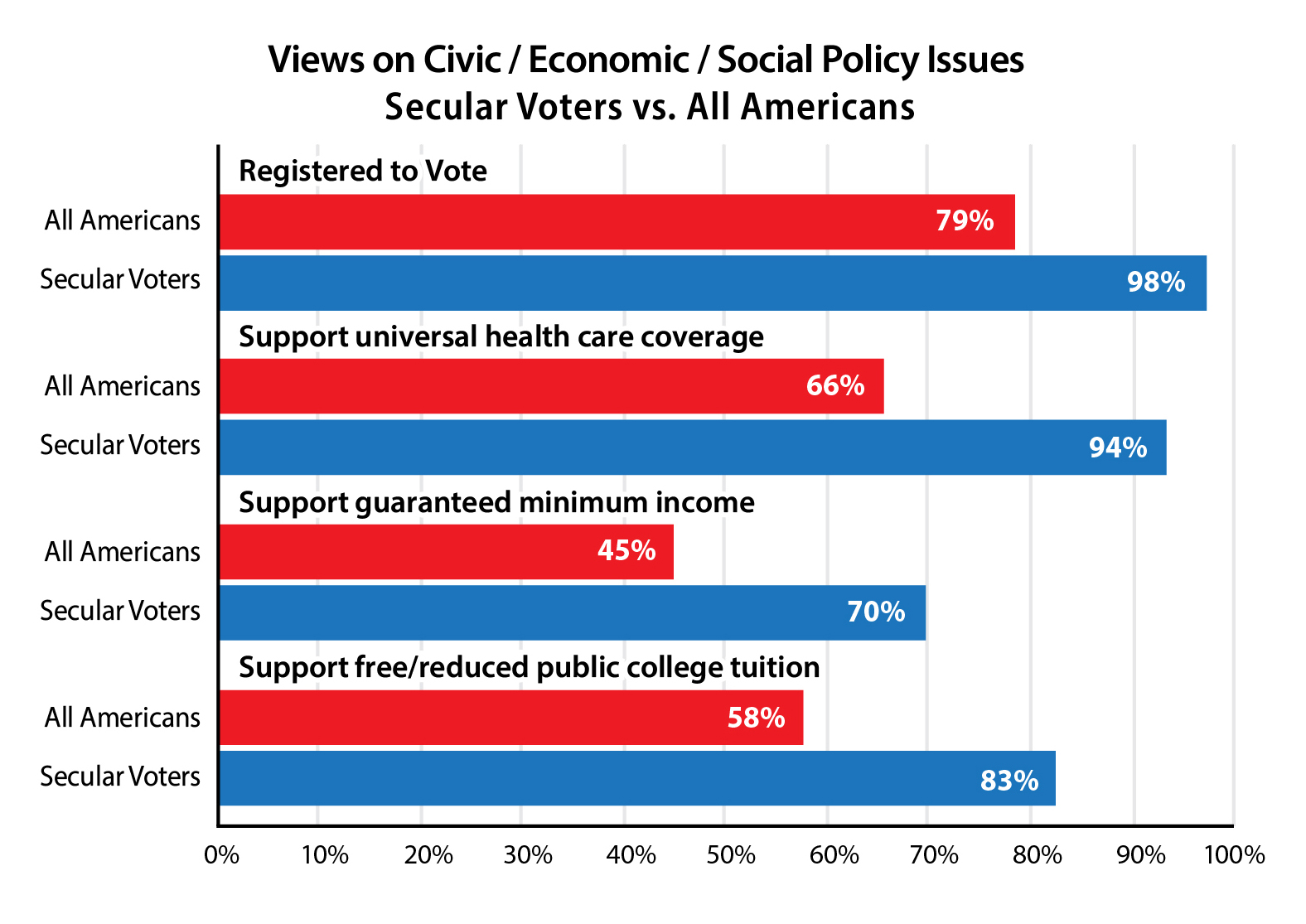 The disparities continue on the hot button topic of racial justice: 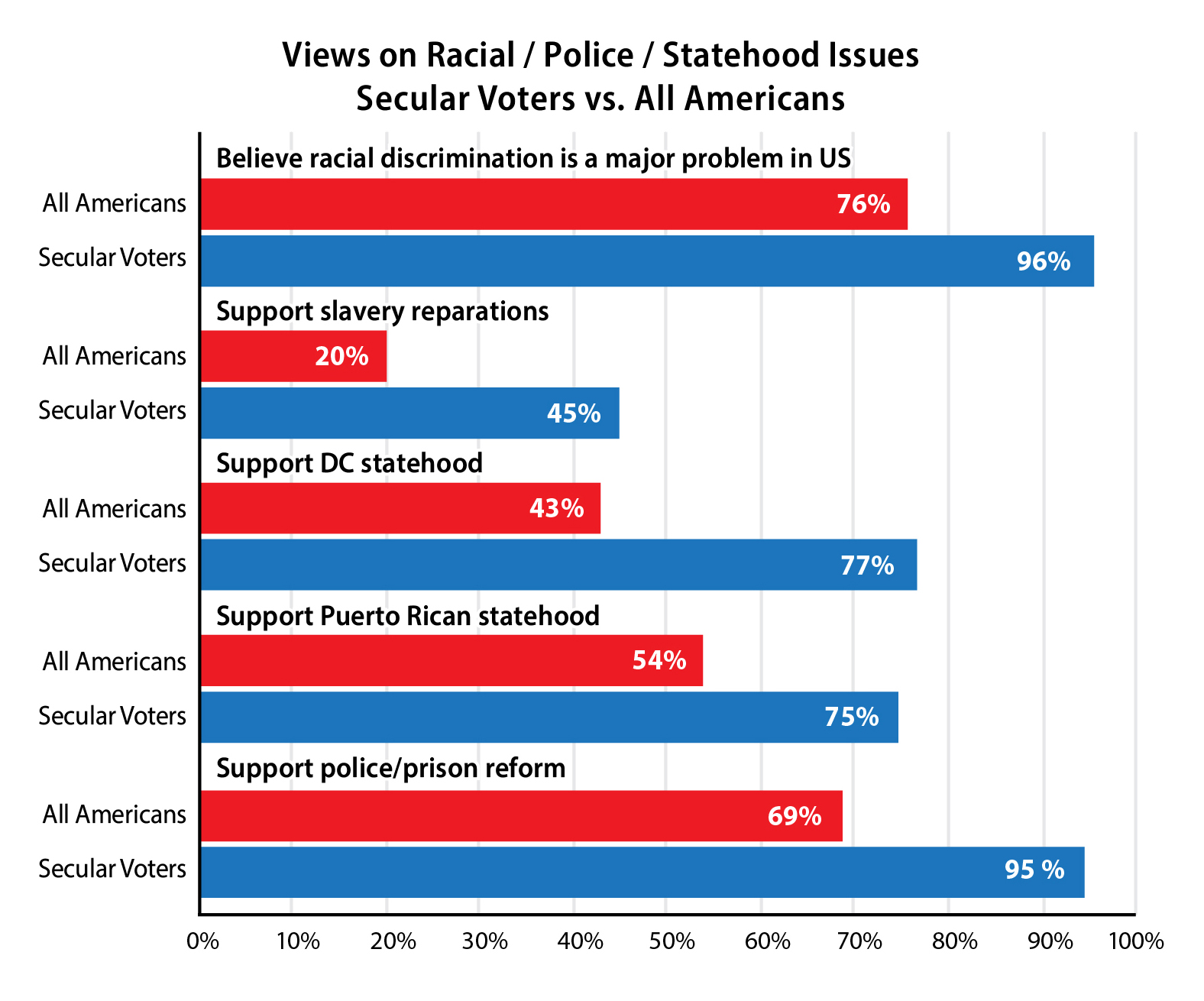 Some other results are not surprising, coming from a minority segment that is particularly supportive of the separation between state and church:

They also overwhelmingly have written and emailed their elected officials (77 percent) and more than a third have protested at a rally or picketed.

“Overall, nonbelievers are obviously caring, compassionate, involved and engaged individuals,” notes Dan Barker, FFRF co-president, “who clearly recognize that this world is what matters. Not believing in a god doesn’t mean you don’t believe in values. We are the real values voters.”

From June through August 2020, FFRF surveyed its 32,000 current members, with more than 12,200 respondents overall participating across the nation. A question on being a registered voter was answered by 12,130 FFRF members, with 98% saying they are registered voters. The social policy questions were answered by 11,904 of the overall respondents. Since the last membership survey in 2015 (with 8,000 responses), FFRF found that the numbers of registered voters in its ranks grew 4 percent, from 96 to 98 percent (which compares to 79 percent of all Americans).

FFRF is a nonpartisan educational nonprofit that does not endorse candidates for office.