A Humanist Air Force veteran and 55-year volunteer firefighter will be featured in a “secular values voter” campaign in Vermont, appearing in full-page ads in the Times Argus and Rutland Herald over the weekend of July 2. 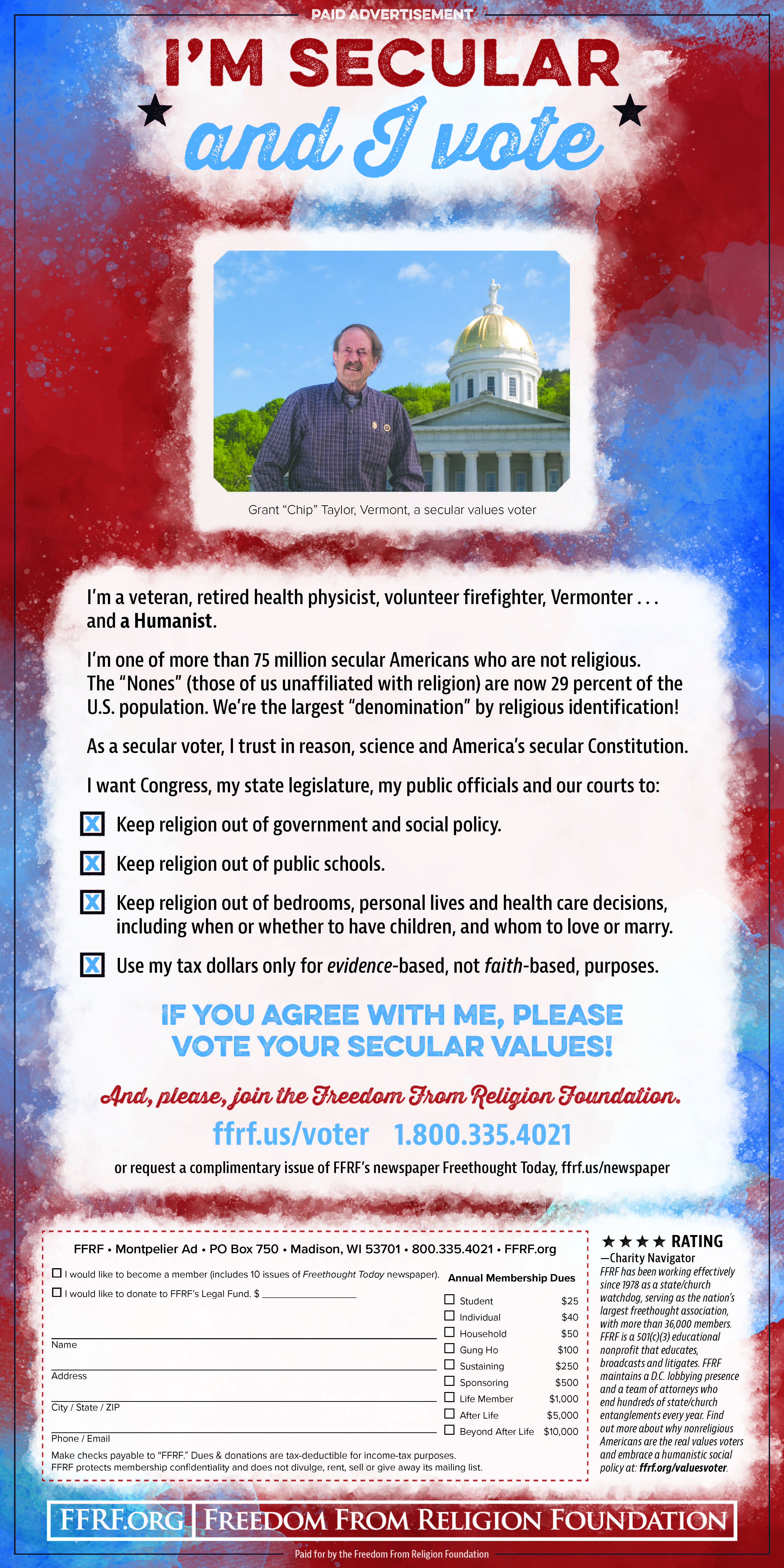 Grant “Chip” Taylor will be featured in a full-page ad headlined “I’m Secular and I Vote,” in which he is pictured in front of his state Capitol. The ad is part of a national multimedia secular voter campaign launched by the Freedom From Religion Foundation in this critical election year.

FFRF points out that Taylor is one of 75 million nonreligious Americans who want Congress, state legislatures, public officials and courts to listen to “secular values voters” by keeping religion out of government and social policy — and that includes on the urgent question of abortion rights.

“Yes,” says Taylor, “I WAS in a foxhole, but only during Officer Training School.” Taylor was in military service as a commissioned officer during the Vietnam War.

After receiving a Master's in political science, he worked in human resources, then did radiological protection for State Emergency Management. He’s been a volunteer firefighter for 55 years on four fire departments and served as chief on two of them. He’s also served on his local school board, on a local health center and various other small volunteer projects.

“Fortunately paid and volunteer service does not require church membership,” he quips.

Taylor notes: “The ‘Nones’ (those of us unaffiliated with religion) are now 29 percent of the U.S. population. We are the largest ‘denomination’ by religious identification!”

The 2020 Census on Religion by PRRI actually shows that the percentage of religiously affiliated in Washington County, Vt., is much higher than the national average at 44 percent.

Adds FFRF Co-President Annie Laurie Gaylor, “FFRF is putting public candidates and officials on notice that the nonreligious now represent nearly a third of all adult Americans. We are the true ‘values voters’ and it’s critical that our secular viewpoint be heard and represented.”

Saying he “trusts in reason, science and America’s secular Constitution,” Taylor lists a compelling number of secular voter demands: To keep religion out of government and social policy, out of public schools, and out of bedrooms, personal lives and health care decisions — including when or whether to have children, and whom to love or marry. “Use my tax dollars only for evidence-based, not faith-based, purposes,” he emphasizes.

The Freedom From Religion Foundation serves as the largest association of freethinkers in North America, with more than 36,000 members including about 100 in Vermont, and works as a state/church watchdog to safeguard the constitutional principle of separation between state and church. To learn more, visit: ffrf.org.