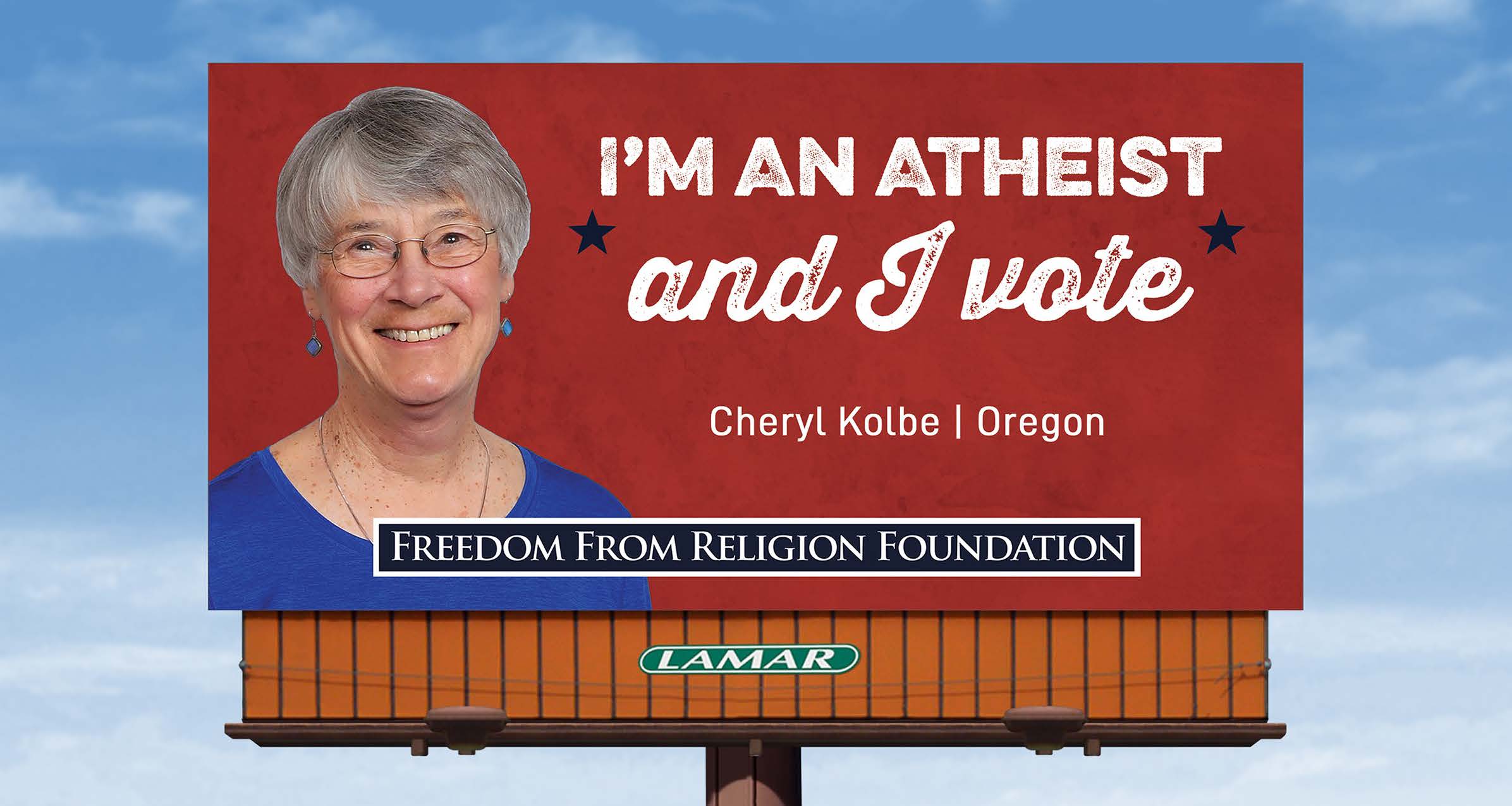 A retired Portlander — mother, grandmother, hiker and kayaker — is featured on a full-size billboard at NE Portland Highway near Simpson Street proclaiming “I’m an Atheist and I vote.” The billboard will be up by the end of the week for a month. 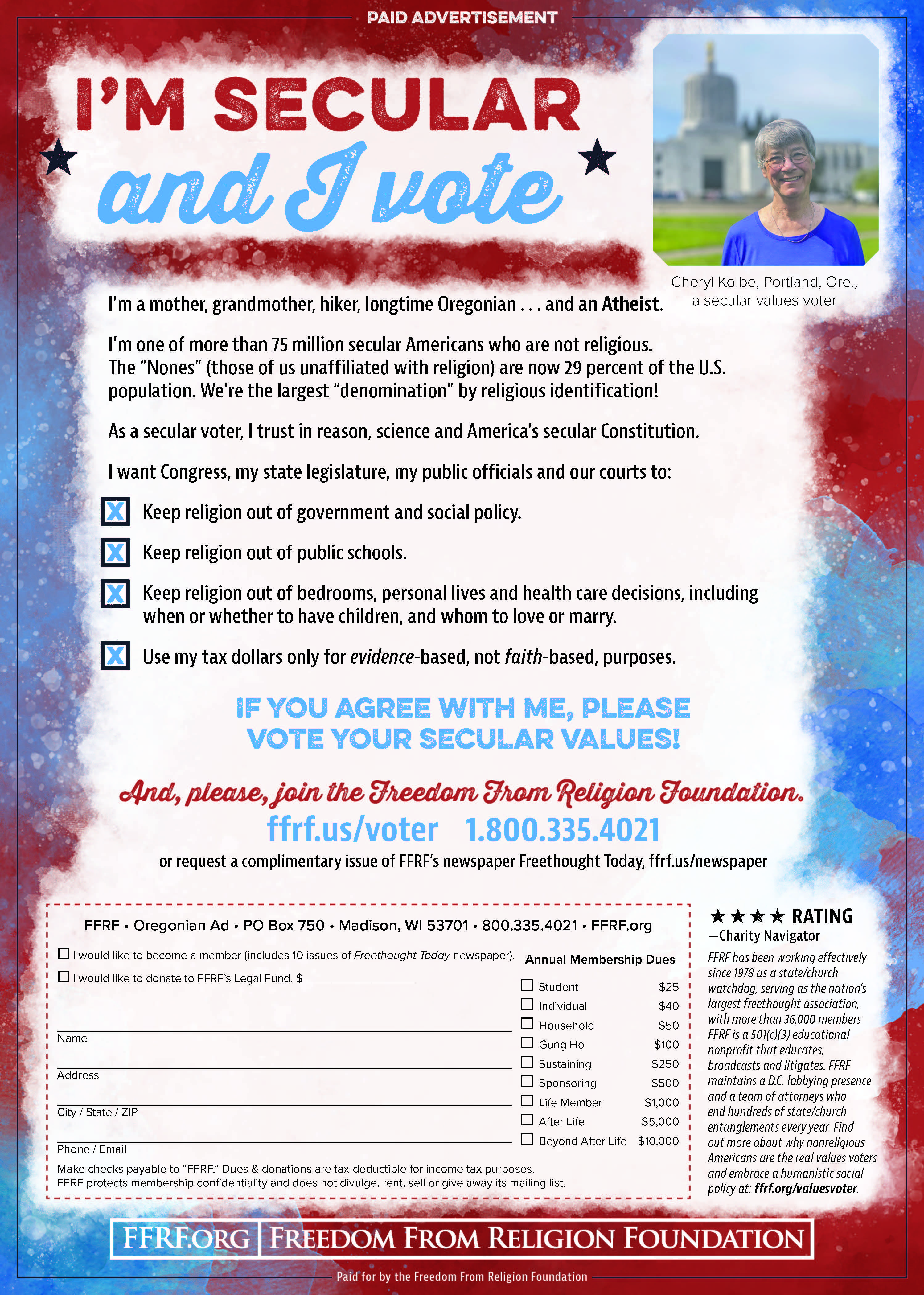 Cheryl Kolbe is not only representing Oregon in a national secular voter campaign launched by the Freedom From Religion Foundation in this critical election year, but is representative of almost half of Multnomah County citizens in having no religion. Forty-eight percent of Multnomah County residents identify as a “None.”

Kolbe will also be featured in a full-page ad headlined “I’m Secular and I Vote,” running in the Oregonian on Sunday, July 3, which pictures her in front of the state Capitol in Salem.

She is one of 75 million nonreligious Americans who want Congress, state legislatures, public officials and courts to listen to “secular values voters” by keeping religion out of government and social policy — and that includes on the question of abortion rights.

In the print ad, Kolbe notes, “The ‘Nones’ (those of us unaffiliated with religion) are now 29 percent of the U.S. population. We are the largest ‘denomination’ by religious identification!” Among Americans under 30, 36 percent identify as religiously unaffiliated.

“We’re putting public candidates and officials on notice that secular voters are here, that WE are the true ‘values voters’ and that it’s time that our secular viewpoint be heard and represented,” says FFRF Co-President Annie Laurie Gaylor.

Saying she “trusts in reason, science and America’s secular Constitution,” Kolbe lists a compelling number of secular voter demands: As a secular American, she wants to keep religion out of government and social policy, out of public schools, and out of bedrooms, personal lives and health care decisions — including when or whether to have children, and whom to love or marry. “Use my tax dollars only for evidence-based, not faith-based, purposes,” she emphasizes.

Kolbe, who retired from Portland Community College in 2004 as Student Systems Support Manager, enjoys the outdoors in the Pacific Northwest. “I share my love of the outdoors in my role as volunteer naturalist for Nature Conservancy,” she says, and adds that her two daughters and two granddaughters “continually enrich my life.” She serves on FFRF’s Executive Board and headed the former Portland FFRF chapter, where she oversaw adoption of an ordinance adding atheist and freethinker to protected classes shielded from discrimination in Portland.

The ad campaign is particularly timely given that the U.S. Supreme Court, at the behest of religiously motivated court challenges, has just overturned Roe v. Wade. Gaylor notes that 98.8 percent of FFRF’s membership supports Roe, which is consistent with a YouGov analysis showing that atheists, at 91 percent overall, are the most likely to identify as pro-choice.

The Freedom From Religion Foundation serves as the largest association of freethinkers in North America, with more than 36,000 members including more than more than 1,650 in Oregon, and works as a state/church watchdog to safeguard the constitutional principle of separation between state and church. To learn more, visit: ffrf.org. 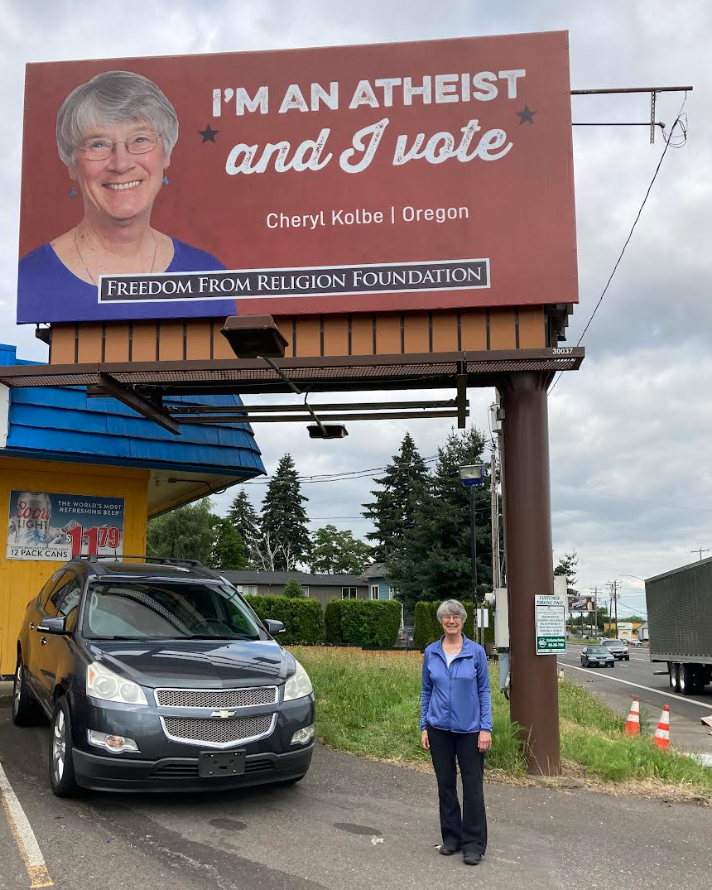