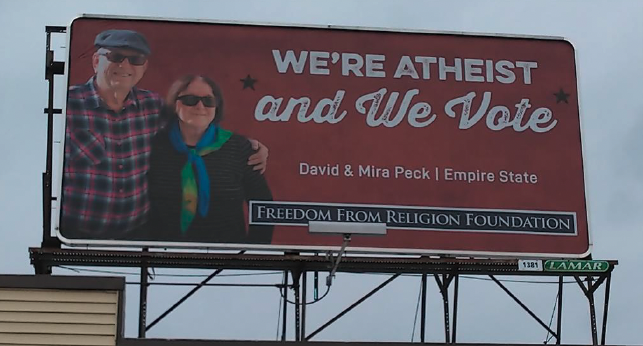 A billboard featuring a distinguished retired couple proudly proclaiming “We’re Atheist and We Vote” has gone up on a rooftop on the corner of NY2 and Second Avenue in Watervliet, in suburban Albany, as part of a national multimedia secular voter campaign launched by the Freedom From Religion Foundation in this critical election year.

Mira and David Peck are representing the state of New York in FFRF’s campaign, and will also appear in a full-page ad in the Albany Times Union running on Sunday, July 3, in which they are pictured in front of their state Capitol building.

Mira, born in the USSR to Polish nationals, one who was Jewish, was raised in Poland in a secular home, and emigrated to Australia at age 16. After graduating from college, Mira hitchhiked to the Great Barrier Reef, where she met her American husband. They trekked through Asia and Europe, then moved back permanently to the United States, where she pursued a Master’s degree and earned a law degree from Rutgers Law School. An American citizen, she had a successful career with BASF Corp. They adopted two children from Russia, who are now grown, and have two grandchildren.

David was born into a Protestant farming family in Upstate New York and after marrying Mira and settling back in the United States, taught high school biology and chemistry. He participated in 10 EarthWatch projects in Inner Mongolia, Costa Rica and Greece, among others. He writes, “Charles Darwin and Thomas Paine are my heroes.”

“We are happy to lend our names to this important cause,” Mira adds.

Mira identifies herself in the newspaper ad as “a retired corporate exec, mother, Empire State citizen . . . and an Atheist.” David is identified as “a retired high school science teacher, father, Empire State citizen . . . and an Atheist” They note: “The ‘Nones’ (those of us unaffiliated with religion) are now 29 percent of the U.S. population. We are the largest ‘denomination’ by religious identification!”

The percentage of religiously unaffiliated is higher than the national average in Albany County, N.Y., at 33 percent.

Explains FFRF Co-President Annie Laurie Gaylor, “FFRF is putting public candidates and officials on notice that the nonreligious now represent nearly a third of all adult Americans. We are the true ‘values voters’ and it’s critical that our secular viewpoint be heard and represented.”

The Freedom From Religion Foundation serves as the largest association of freethinkers in North America, with more than 36,000 members including more than 1,950 in New York State, and works as a state/church watchdog to safeguard the constitutional principle of separation between state and church. To learn more, visit: ffrf.org.