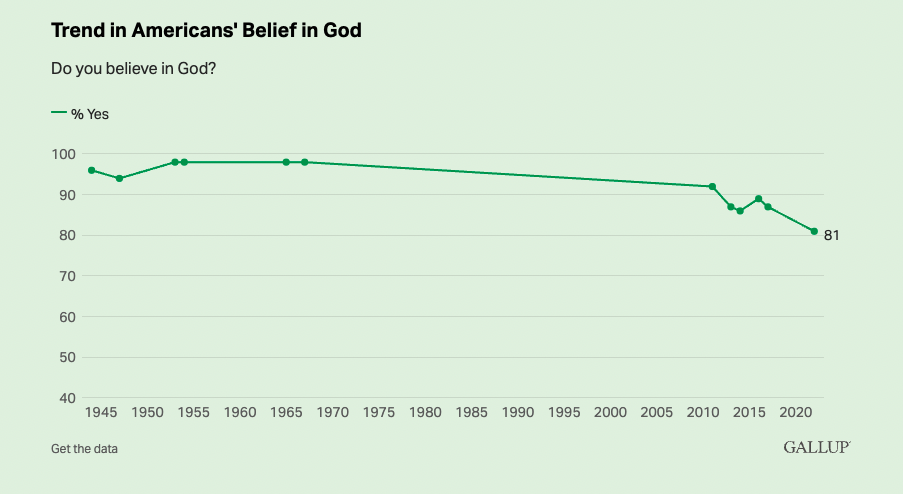 The Freedom From Religion Foundation applauds a new finding by Gallup that shows the percentage of Americans who do not believe in a god is the highest since Gallup began asking the question nearly 80 years ago.

The just-released Values and Belief poll shows 17 percent of individuals polled indicate they don’t believe in God, with 81 percent believing in God, down from 87 percent in 2017.

Gallup first started asking the question “Do you believe in God?” in 1944, periodically repeating the survey. From 1944 through the 1960s, Gallup consistently found 98 percent said they believed in God. By 2011, 92 percent were telling Gallup they believed in God and the numbers continue to drop.

The Gallup poll release follows the good news last week from Pew Research that “the vast majority of adults say religion should be kept separate from government policies.”

Gallup appears to have the most conservative findings, with Pew recently discovering that three-in-ten Americans — almost a third — “describe themselves as atheists, agnostics or ‘nothing in particular’ when asked about their religious identity.” PRRI Research in 2020 found the unaffiliated at 23 percent.

“Not all of the ‘Nones’ identify as atheists or agnostics, of course. But all of these polls and surveys are showing that, for a significant number of Americans, religion is not for them,” comments Annie Laurie Gaylor, FFRF co-president. “When are public officials, candidates and our courts going to start reflecting and representing secular Americans?”

The Freedom From Religion Foundation, founded as an educational nonprophet nonprofit in 1978, has more than 36,000 nonreligious members and works as a state/church watchdog.