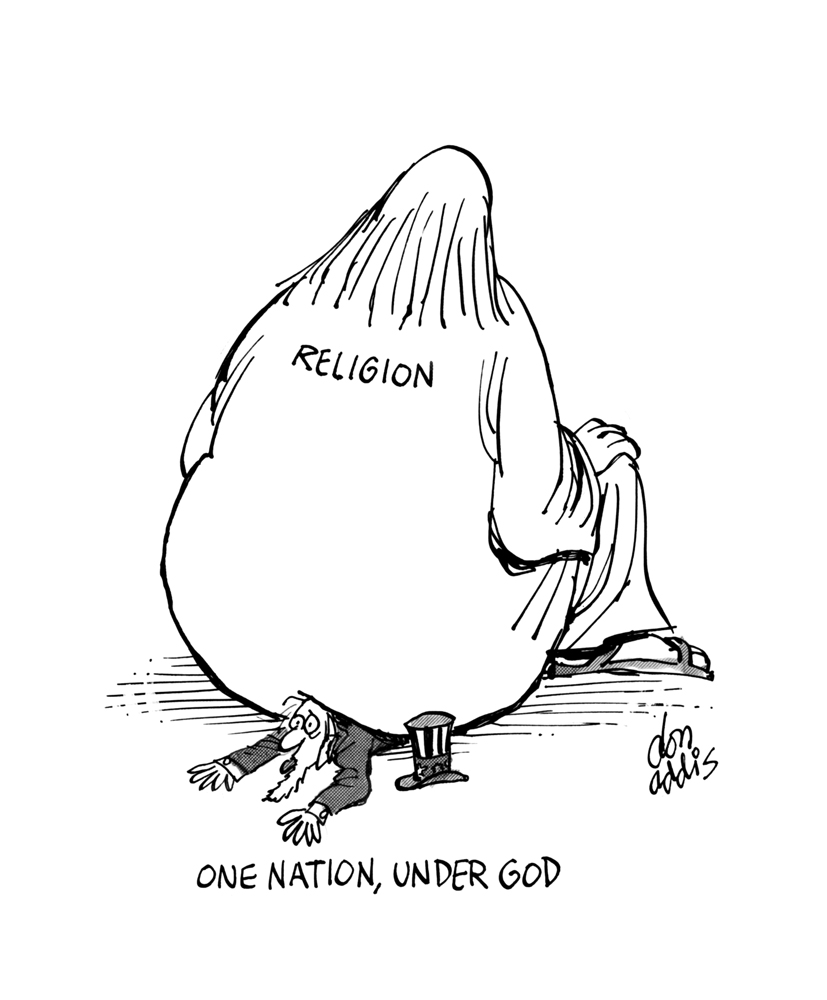 Public officials, take heed: At a time when the nation has never faced greater religious interference with public policies, Pew Research is showing that “the vast majority of adults say religion should be kept separate from government policies.”

The Freedom From Religion Foundation cheers the good news that fully 73 percent of adult Americans support separating religion from government policies. Perhaps not surprising, the survey finds that 91 percent of religiously unaffiliated Americans say the U.S. government should not promote religious values.

“That’s why FFRF’s motto is ‘Freedom depends on freethinkers,’” notes Annie Laurie Gaylor, an FFRF co-founder and co-president. “Those of us who are nonreligious have the most to lose when religion is united with government, and are the most willing to criticize religious influence over our laws and life.”

The findings go beyond mere lip service for the constitutional separation between state and church. Americans specifically were asked if government policies “should support religious values and beliefs” or whether “Religion should be kept separate from government policies.”

The public support for secular government and policies is clearly at odds with major judicial and legislative developments embracing radical conservative Christian agendas. The nation is holding its collective breath on the probable repeal of Roe vs. Wade by a majority of extremely religious justices on the Supreme Court. Our legislatures are clogged with religiously-motivated legislation seeking to ban abortion and even contraception, turn LGBTQ students into pariahs and censor school library collections. Public officials and candidates are increasingly making radical statements in favor of Christian nationalism and proclaiming themselves to be following “God’s law.”

The survey also came down as the House Select Committee hearings began over the Jan. 6 insurrection. FFRF and the Baptist Joint Committee have issued an important report documenting the Christian nationalist role in the attempted coup, and have urged the committee to investigate this aspect of the assault.

“This divide between what most Americans want and what we are getting from public officials shows the urgent need for supporters of secular government to speak up, to vote and to demand accountability,” says Dan Barker, FFRF co-president.

The Pew survey not surprisingly also reveals what it calls “sizable differences in these views by partisanship and religious affiliation.” It found that Republicans are more than twice as likely as Democrats to say government policies should support religious values and beliefs (38 percent to 16 percent).

The partisan divide is revealed by the fact that 84 percent of Democratic or Democratic-leaning adults favor separation, compared to 61 percent of Republican or Republican-leaning. Nevertheless, it is striking that two-thirds of Republicans come down in favor of separation.

Among racial groups, 79 percent of Asians, 76 percent of Hispanics, 74 percent of whites, and 64 percent of Blacks overall affirmed that religion should be kept separate from government policies.

The Freedom From Religion Foundation, founded as an educational nonprophet nonprofit in 1978, has more than 36,000 nonreligious members and works as a state/church watchdog.