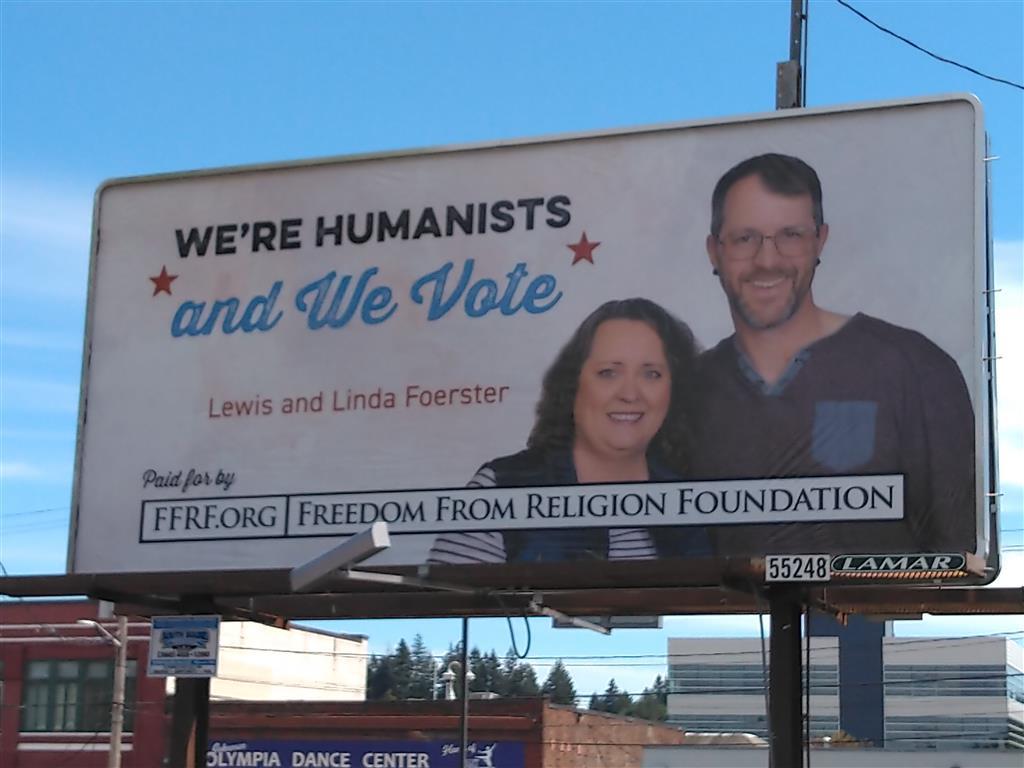 A smiling Chehalis couple appears on a 10.5-by-22.75 billboard proclaiming “We’re Humanists and We Vote” that has recently gone up for a month at East 5th Avenue near Jefferson in Olympia, Wash. The billboard is part of a national secular voter campaign that the Freedom From Religion Foundation is launching first in Washington state.

Lewis and Linda Foerster will also be pictured in front of the state Capitol building in a photo as part of a full-page ad headlined “We’re Secular and We Vote” that runs in The Olympian on Sunday, July 3. The ad describes them as “secular values voters.” Lewis, who is president of Unfettered Freethinkers of South Sound, an area chapter of FFRF, is described in the ad as father, veteran and Humanist, and Linda as a wife, daughter, friend and Freethinker.

“We are a secular freethinking couple,” Lewis explains. “We are concerned about the separation of religion and government.”

“We’re putting public candidates and officials on notice that secular voters are here, that WE are the true ‘values voters’ and that it’s time that our secular viewpoint be heard and represented,” says Annie Laurie Gaylor, FFRF co-president. The campaign includes a compelling list of secular voter demands.

The Foerster billboard is the first in a nationwide campaign that will feature a nonreligious citizen (or couple) representing each state.

“We’re two of more than 75 million secular Americans who are not religious,” Lewis and Linda write in the ad. “The ‘Nones’ (those of us unaffiliated with religion) are now 29 percent of the U.S. population. We’re the largest ‘denomination’ by religious identification!”

In fact, in Thurston County, where Olympia is located, 38 percent of the population identifies as religiously unaffiliated.

As secular voters, the Foersters note that they “trust in reason, science and America’s secular Constitution.” They demand that Congress, their state legislature, public officials and courts keep religion out of government and social policy, out of public schools, and out of bedrooms, personal lives and health care decisions, including when or whether to have children, and whom to love or marry. Tax dollars should be used only for evidence-based, not faith-based, purposes, they emphasize.

The ads are particularly timely given the fact that the U.S. Supreme Court is poised, at the behest of religiously motivated court challenges, to repeal Roe v. Wade and turn abortion rights back to state legislative decree. Gaylor notes that 98.8 percent of FFRF’s membership supports Roe. This is consistent with a YouGov analysis showing that atheists, at 91 percent overall, are the most likely to identify as pro-choice.

FFRF is running the billboards and newspaper ads in time for the July Fourth weekend in about half of the United States, with the rest appearing by Sept. 17, Constitution Day.