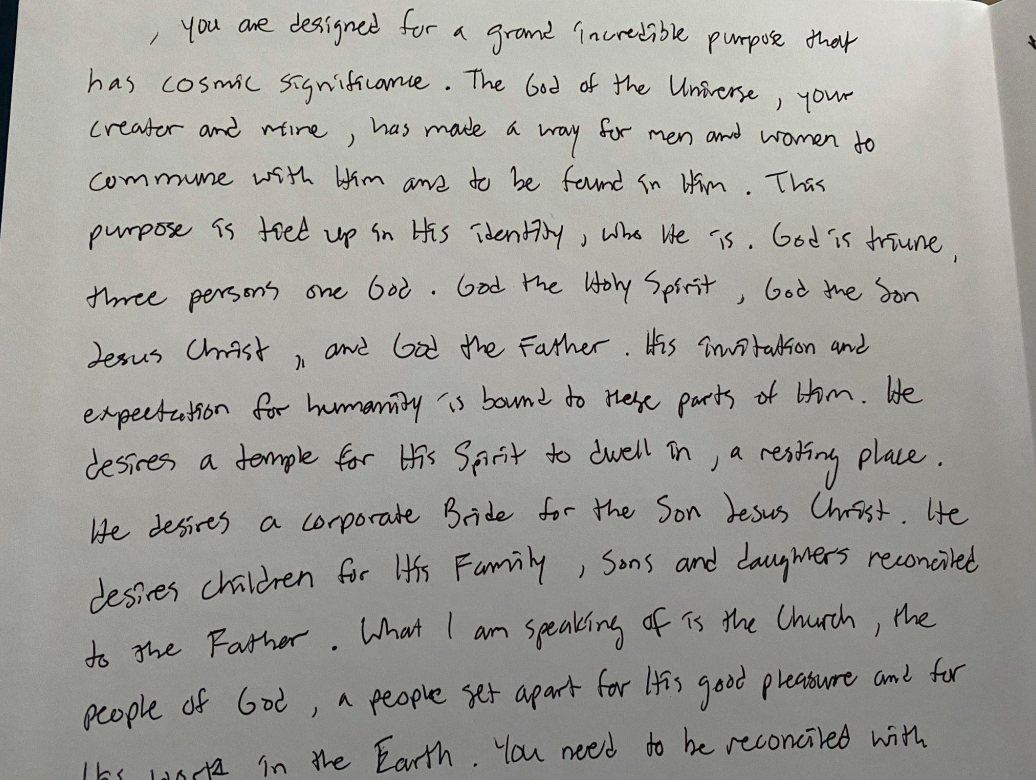 The Freedom From Religion Foundation is insisting that an Alabama school district immediately halt a teacher’s blatant proselytizing.

A concerned Shelby County Schools parent has informed the national state/church watchdog that their child’s teacher has been proselytizing to students and has been exhibiting other concerning behavior. The parent reported that Alan Waring, a biology teacher at Calera High School, sent home religious materials with students and signed a student’s yearbook with a similar religious message.

The handout Waring gave to students was titled, “God loves you and He has a plan for your life.” It is a bizarre religious screed meant to indoctrinate students into Christianity. It reads in part:

The good news is that this perfect, infinite person is real and He has demonstrated His love for you by the work of His Cross. He has humbled himself and, though He had equality with God from the beginning, chose to take on our form, forever. He became a man, He was born, He lived a life on Earth, and He died and because of the nature of His heart and His sacrifice for Sin, God raised Him from the dead. Jesus Christ, the Son of God became a Son of Man, He has entered into our nature, and He has invited us to enter into His.

Regardless of your feelings towards Jesus, how much you agree with Him or disagree with Him, you will bow before The King. You will bend your knee, and you will confess with your mouth that He is the Lord, even if you hate Him.

And Waring put a similar message in a student’s yearbook:

…you are designed for a grand incredible purpose that has cosmic significance. The God of the Universe, your creator and mine, has made a way for men and women to commune with Him and to be found in Him. This purpose is tied up in His identity, who He is, God is triune, three persons one God. God the Holy Spirit, God the Son, Jesus Christ, and God the Father… He desires a corporate Bride for the Son, Jesus Christ. He desires children for His family, Sons and daughters reconciled to the Father.

“If the district continues to turn a blind eye to the overt proselytization occurring in Mr. Waring’s classroom, it becomes complicit in an egregious constitutional violation and breach of trust,” FFRF Staff Attorney Chris Line writes in a letter to the counsel for the school district. “The district must make certain that none of its employees are unlawfully and inappropriately indoctrinating students in religious matters by discussing their personal religious beliefs, preaching, handing out religious materials, or otherwise creating a religious environment in their classrooms.”

And, FFRF emphasizes, that it is not a violation of the free speech rights of teachers when a school district regulates what they teach to students while acting in their official capacities. Teachers have access to a captive audience of students due to their position as public educators. Therefore, the district must regulate religious proselytizing during the school day. Courts have upheld the termination of teachers who violate the principle of separation between church and state.

In Edwards v. Aguillard, the Supreme Court has recognized that “[f]amilies entrust public schools with the education of their children, but condition their trust on the understanding that the classroom will not purposely be used to advance religious views that may conflict with the private beliefs of the student and his or her family.”

It is a fundamental principle of First Amendment jurisprudence that the government cannot in any way promote, advance or otherwise endorse religion, FFRF points out.

“This sort of abusive conduct cannot be tolerated in our public schools,” says FFRF Co-President Annie Laurie Gaylor. “The freedom of conscience of students, especially those belonging to minority religions — and no religion at all — is in grave jeopardy under such teachers.”

The Freedom From Religion Foundation is a national nonprofit organization with more than 36,000 members across the country, including hundreds of members in Alabama. Its purpose is to protect the constitutional principle of separation between state and church.