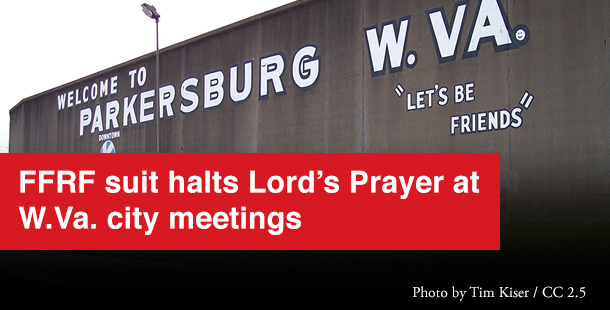 The Freedom From Religion Foundation and two of its members have won a federal court challenge against a West Virginia city that, according to the ruling, “wrapped itself in a single faith” by opening with the Lord’s Prayer.

U.S. District Judge John T. Copenhaver, Jr. issued a 30-page decision today in FFRF’s favor. He permanently enjoins the city of Parkersburg from continuing its practice of reciting the Lord’s Prayer at each city council meeting. The decision declares the practice unconstitutional, awards each plaintiff nominal damages, and allows the plaintiffs to seek attorneys fees.

“The City Council’s prayer practice most clearly runs afoul of the Fourth Circuit’s concern with identifying the government with a single preferred religious sect,” writes Copenhaver.

The 4th Circuit U.S. Court of Appeals, which has jurisdiction over West Virginia, had previously struck down Christian prayers recited by county commissioners. The opinion by Copenhaver concludes under that analysis: “[T]he City Council wrapped itself in a single faith.”

As the ruling explains: “That is exemplified by the unduly heightened risk of coercion by the state by virtue of the governmental identity of the prayer-givers acting in unison, the invariable nature of the sectarian prayer that is associated with and endorses Christianity, and the implicit and sometimes express invitation to the public in attendance to join in, all in the relative intimacy of a local government setting. It is the combination of these factors — the totality of the circumstances — that renders the prayer practice of the City Council impermissible.”

In 2018, FFRF and two of its local members had sued the city of Parkersburg, W.Va., in the U.S. District Court for the Southern District of West Virginia, to challenge the city council’s formal recitation of the Christian “Lord’s Prayer,” which had officially opened every meeting for more than a decade. Council members led the prayer and were joined by city residents at each meeting in reciting it.

In April 2020, FFRF filed a motion for summary judgment asking the court to rule the practice unconstitutional, noting the practice defies well-established law barring legislators from reciting prayers from exclusively one faith in local government meetings. “Through its commitment to this practice and tradition, Parkersburg has essentially adopted the Lord’s Prayer as the official prayer of the city,” FFRF charged. The Lord’s Prayer derives from the gospel of Matthew (also repeated in the gospel of Luke) in the New Testament.

The plaintiffs include Daryl Cobranchi, who in the past had frequently attended meetings and been directed to stand for the Lord’s Prayer, a practice, he notes, that has made him conspicuous by his nonparticipation and which “assigns to second-class status anyone who is not Christian.” Likewise, Eric Engle, a Parkersburg resident, follows city matters and has felt uncomfortable and pressured to participate in the Christian prayer during public meetings.

Engle comments: “In a country currently plagued by Christian nationalism, this decision is an affirmation of our secular constitutional order and a badly-needed patch in the wall of separation between church and state!”

At least one prior member of the City Council has been openly hostile to nonparticipants. Councilman Eric Barber glared at attendees who sat during the prayer at a meeting. At the end of that prayer, Barber positioned himself near his microphone, pressed the button, and shouted, “Amen.” FFRF later called for an investigation into Barber’s participation in the Jan. 6 insurrection at the U.S. Capitol.

“The government shouldn’t be in the business of composing or adopting official prayers, as the court has affirmed. Those prayers turned non-believers into outsiders, now at 29 percent of the population, and non-Christians in general, about 35 percent overall, which is a lot of citizens to exclude,” says FFRF Co-President Annie Laurie Gaylor. “We’re delighted that reason has prevailed, and that our secular Constitution ‘will be done.’”

Gaylor warmly thanks the local plaintiffs for standing up for secular government, a linchpin of U.S. democracy.

The case is No. 2:18-cv-01198. Legal representation was provided by outside counsel Marcus B. Schneider, local counsel Kristina Thomas Whiteaker, and by FFRF Attorneys Patrick C. Elliott and Christopher Line.

The Freedom From Religion Foundation, founded in 1978, has 37,000 members nationwide, including members in West Virginia. FFRF works to defend the constitutional principle of separation between state and church and to educate the public about nontheism.