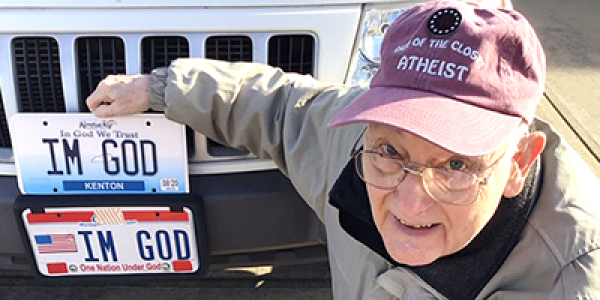 The Freedom From Religion Foundation is sad to announce the death early this morning of FFRF member, chapter leader, court victor and feisty octogenarian Ben Hart.

When Ben asked for his tongue-in-cheek freethinking license plate to be approved, the state of Kentucky responded that his submitted wording was “obscene and vulgar” even though it allowed numerous religious plates. After FFRF and the ACLU of Kentucky filed a federal suit in November 2016 on Ben’s behalf, the BBC picked up the story and, as Ben noted: “It went around the world.” Fox News and the Washington Post interviewed him. In January 2020, Ben was finally informed that his “IM GOD” plate was on the way. When it arrived, it didn’t contain the slogan “In God We Trust,” ruining Ben’s joke. He complained — and the state reissued it correctly.

Ben recorded a video acceptance speech of his “Freethinker of the Year” award, which was bestowed remotely at FFRF’s online national membership meeting in November 2020. He noted, “I now have the most famous license plate in the world on the front of my Jeep and the most expensive license plate in the country on the rear, thanks to the Freedom From Religion Foundation and the Kentucky American Civil Liberties Union.” He observed that the state had to pay $150,000 in attorney fees “to deny me my rights, and that, my friends, shows the power our Freedom From Religion Foundation has.”

Ben explained his “IM God” wording: “And for those who are wondering, I’m not the god of the bible — that’s the guy who drowned all the babies in the world.” He added, “I’m the god of the dictionary. The American Heritage Dictionary has six definitions for ‘god.’ Number five is ‘a very handsome man.’ And my wife says I’m a very handsome man. And nobody argues with my wife.”

He and his wife Yvonne, who knew each other since being youngsters, recently celebrated their 65th anniversary. Born in Corbin, Ky., in 1939, Ben described rebelling against a “life of religious saturation, seven days a week.” The couple lived in Cincinnati when Ben worked for the postal service and pursued some small business initiatives. Ben was also a race car driver, according to Dan Myers, director and treasurer of FFRF’s Cincinnati Metro Chapter.

Ben, who had several heart issues and used a cane-style walker, had been unusually fatigued the last couple of weeks. He fell late last night and was nonresponsive. He was taken to a nearby hospital, where he died.

The "I'm God" license plate is on display in the legal wing of Freethought Hall.

“I and other staff members were in touch with Ben as recently as late last week,” says Annie Laurie Gaylor, FFRF co-president. “He was the sweetest, funniest guy. We send our heartfelt condolences to his family and to his friends at the Cincinnati Metro Chapter.”