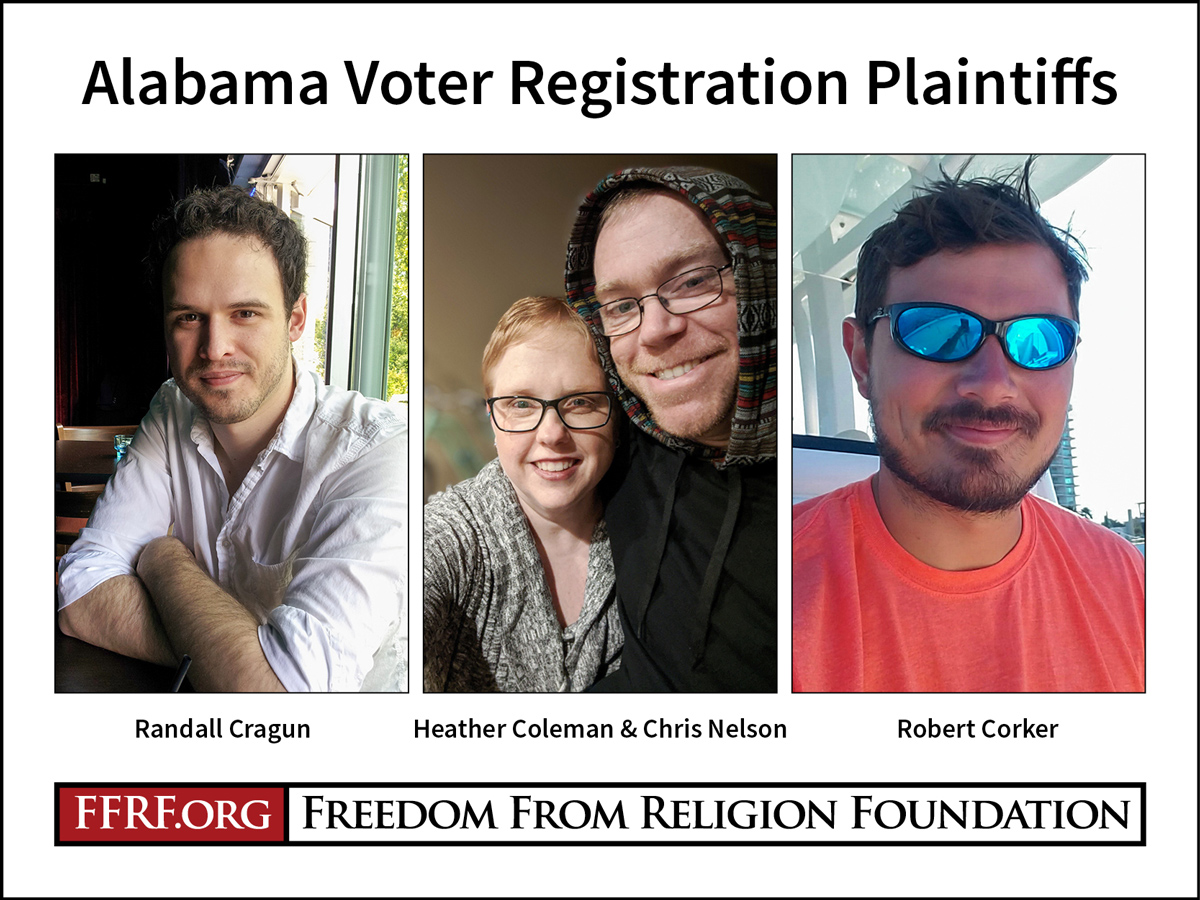 The Freedom From Religion Foundation has attained a huge constitutional victory for secular voters in Alabama.

FFRF sued the Alabama secretary of state last October on behalf of four Alabama citizens who encountered and objected to a religious test to register to vote.

Now that the state of Alabama has amended all its voter registration forms to allow citizens to opt out of the religious oath, both online and in printed forms, the national state/church watchdog is voluntarily dismissing its federal lawsuit challenging the uniquely Alabamian mandatory religious voter registration oath.

“The Alabama secretary of state excludes Alabama citizens from being able to vote if they are unable to swear a religious oath,” stated the suit. “The secretary of state’s official policy is to hinder the registration of voters who are unable to swear ‘so help me God.’ This policy violates the rights of the plaintiffs and others under the First and 14th Amendments to the United States Constitution.”

As part of a settlement, the secretary of state has amended all of the voter registration forms to allow voters to avoid swearing a religious oath. The new “mail in” form provides a check box that says, “OPTIONAL: Because of a sincerely held belief, I decline to include the final four words of the oath above.”

Shortly after the suit was filed, the secretary of state began implementing other changes. In November, the office adopted a new administrative rule that allows voters to strike out “so help me God” and provided guidance to county registrars (who add voters to the rolls) saying that voters could cross out the language.

The lead plaintiff, Randall Cragun, an atheist, had sought to register to vote in Alabama since November 2019. However, voters submitting this registration form in Alabama had to sign the voter declaration, beginning “I solemnly swear or affirm” and concluding with “so help me God.” The director of elections informed Cragun: “There is no legal mechanism to register to vote in AL without signing the oath as it is stated.”

The state of Alabama has dramatically changed its posture, thanks to FFRF’s lawsuit.

FFRF’s plaintiffs Chris Nelson and Heather Coleman (who are married) were able to register using the new form in March. Both of their registrations were accepted by the Shelby County registrars. “We are glad that the state has — at least, begrudgingly — made some concessions to support state-church separation, and that freethinkers in Alabama will continue to push for these reforms,” they say.

The other plaintiffs have expressed their appreciation for not being forced to pose as religious in order to exercise such a basic right.

“Because of this suit, I will finally be able to register to vote in Alabama,” says Cragun. “It is disappointing that the state prevented me from voting in the 2020 elections, but I am looking forward to participating in the future, and I now have a better appreciation of the value my voice and other individual voices contribute to shaping the state.”

Adds co-plaintiff Robert Corker, “I am proud to have been a part of this effort to secularize voting in the state of Alabama. I relish more opportunities to foster inclusiveness for nonbelievers in this state.”

FFRF is honored to play its part of securing voting access for all Alabamians.

The national state/church watchdog is surprised that it took its lawsuit to bring about such needed change.

“Millions of Alabamians were being asked to swear a religious oath as a fait accompli,” says FFRF Co-President Annie Laurie Gaylor. “We warmly thank the plaintiffs, without whom we could not have put an end to this unconstitutional mindgame.”

The lawsuit had been filed in the U.S. District Court for the Northern District of Alabama, Southern Division. Steven P. Gregory of the Birmingham-based Gregory Law Firm was serving as co-counsel. FFRF Senior Litigation Counsel Patrick Elliott and FFRF Associate Counsel Liz Cavell were also attorneys in the case. The defendant was Alabama Secretary of State John H. Merrill.

FFRF litigation to correct state/church entanglements is made possible thanks to kind donations designated to FFRF’s legal fund.

The Freedom From Religion Foundation is a national nonprofit organization with more than 35,000 members across the country, including hundreds of members in Alabama. Its purpose is to protect the constitutional principle of separation between state and church.