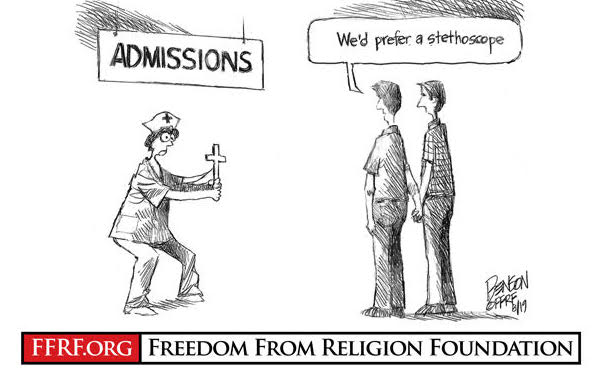 The U.S. Department of Health and Human Services (HHS) recently announced a final rule declaring that it will no longer recognize anti-LGBTQ discrimination as an instance of sex discrimination, effectively endorsing bigotry against LGBTQ individuals in health care. The Freedom From Religion Foundation condemns this despicable move in the strongest possible terms. But there is reason for hope.

In fact, just today the U.S. Supreme Court held 6-3 that firing an employee based on their sexual orientation or gender identity violates Title VII. Even two conservative justices, Neil Gorsuch and John Roberts, recognized that anti-LGBTQ discrimination is sex discrimination. As this new decision takes effect, HHS’ rule and others like it will either be amended or struck down by courts.

Under the newly finalized rule, HHS will allow doctors, nurses, and health insurance companies to refuse to provide care to individuals on the basis of their sexual orientation or gender identity. This means a doctor could refuse to treat a transgender patient who, for instance, broke their arm or has strep throat, simply because of who that patient is. Disgustingly adding insult to injury, the rule was announced on the four-year anniversary of the Pulse nightclub mass shooting in Orlando.

“There is no reason for this change except to rubber-stamp discrimination that is primarily motivated by ancient religious prejudice,” comments FFRF co-president Annie Laurie Gaylor. “It’s an embarrassing backslide in civil rights that history will look upon with revulsion.”

This senseless bigotry is sadly not surprising, given the current administration’s anti-LGBTQ track record. We should be able to count on our federal judiciary to apply basic logic and protect human rights, including the rights of LGBTQ individuals, but the rush to give religious ideologues lifetime appointments as federal judges casts doubt on this assumption, even in the light of today’s Supreme Court decision. The Freedom From Religion Foundation will join other civil liberties groups and activists in continuing to work toward achieving explicit LGBTQ protections in the law throughout the country.